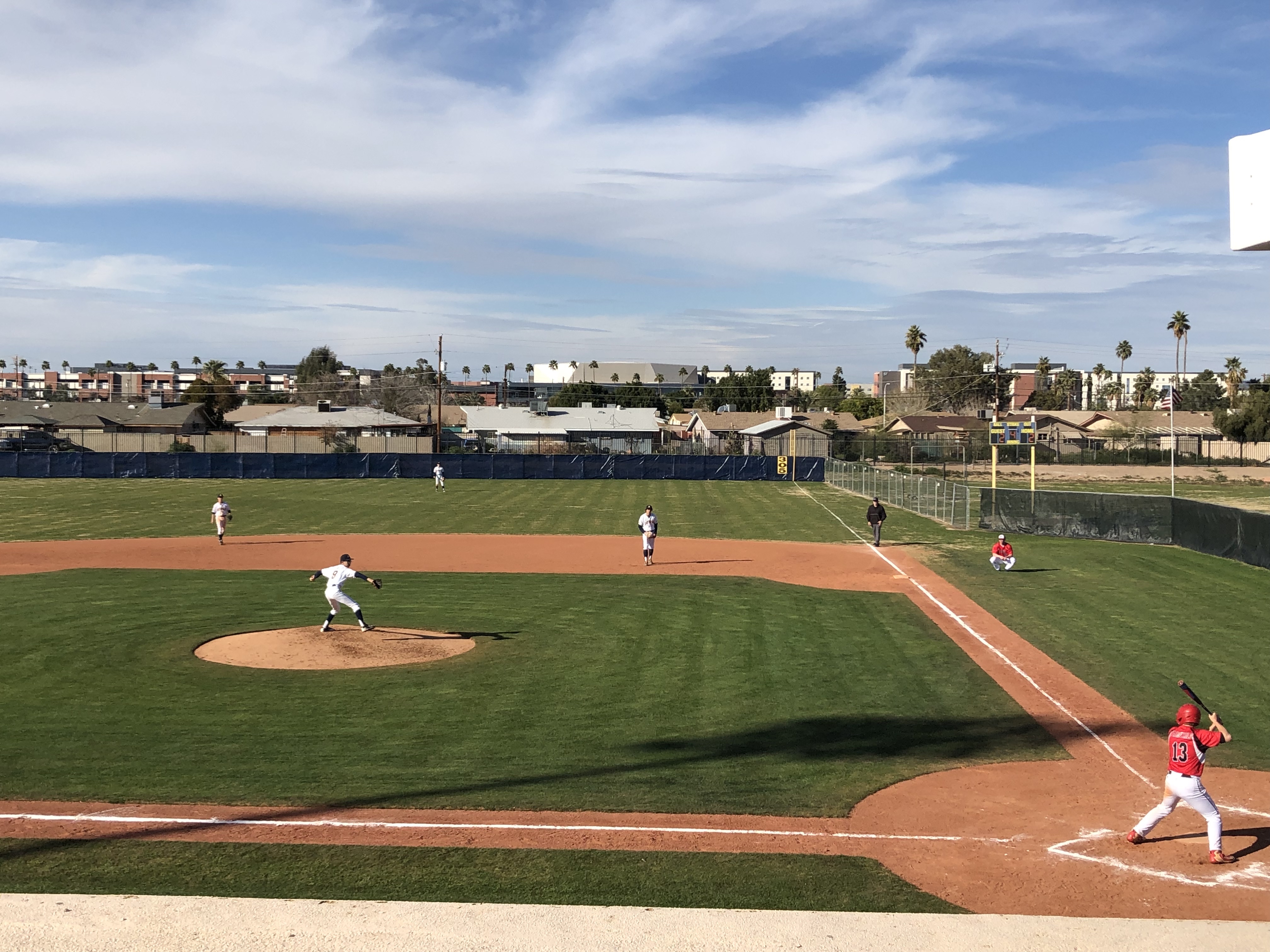 Dysart senior Jake McClelland went four strong innings on 87 pitches and led the way for the Demons to get an 8-2 win over the Bourgade Golden Eagles on the road in their season opener on Wednesday.

McClelland came out a little erratic in the first inning, walking two, and allowing Bourgade’s only senior, Kenny Jackson, to score on a wild pitch. However, the Demon ace honed it in for the rest of the game, allowing just one more run and three more hits during his four-inning stint.

“I think he pitched with a lot of guts,” Dysart head coach Nicholas Rizzi said. “He didn’t have his best stuff today, but a younger version of Jake would have found a way for that game to blow up. But, he showed a lot of maturity and kept attacking the strike zone to the best of his ability today.”

Rizzi said the entire team was nervous and looked nervous during the early portions of the game, but they were able to dial it in when they needed to and pick up the victory.

“I was nervous,” McClelland said. “Had to get it (opening day])out of the way, you know? But, I got behind and I got back up and found my rhythm.”

The game was shaping up to be a pitchers duel through three innings as they headed to the top of the fourth tied, 2-2, but the Demons broke the game open with six runs in the top half and essentially put the game out of reach.

Golden Eagle freshman starter Peter LaBorin was pitching a solid game until then. But in the top of the fourth, it was single, single, walk, RBI single, and a two-RBI single to start the inning, which effectively ended his day.

LaBorin has a deceptive delivery that was giving the Demons problems the first time through the lineup, Rizzi said. But, by the time the bottom half of the order came up for the second time, the nerves were calmed down and they got back to their “textbook” hitting.

Bourgade head coach Michael Briguglio knew that this was going to be a tough matchup since BCHS is brand new to 3A and the Demons are a 4A team.

After the fourth inning onslaught by the Demons, the rest of the game was pretty quiet and the final stayed at 8-2.

A bright spot for the Golden Eagles was Kenny Jackson. Their lone senior leader went 2-for-2 with a walk, a run and a stolen base. He was very happy with the way he played despite the score not ending up in their favor. As the only senior, he said he is trying to lead by example.

“Basically, I just have to teach the younger guys and make sure everyone is doing what they need to be doing,” Jackson said. “Just try to show them what to do and if they need help, always ask.”

This game was part of the annual Cougar Classic, a high school baseball tournament held annually in the valley. Each team will have three more games in the tournament.

Dysart (1-0) will face off against Fountain Hills (0-1) today in their second game of the Cougar Classic.

Bourgade (0-1) will battle Odyssey Institute (0-0-1) today at 3 p.m. in what will be their second of 10 straight home games to start the season.