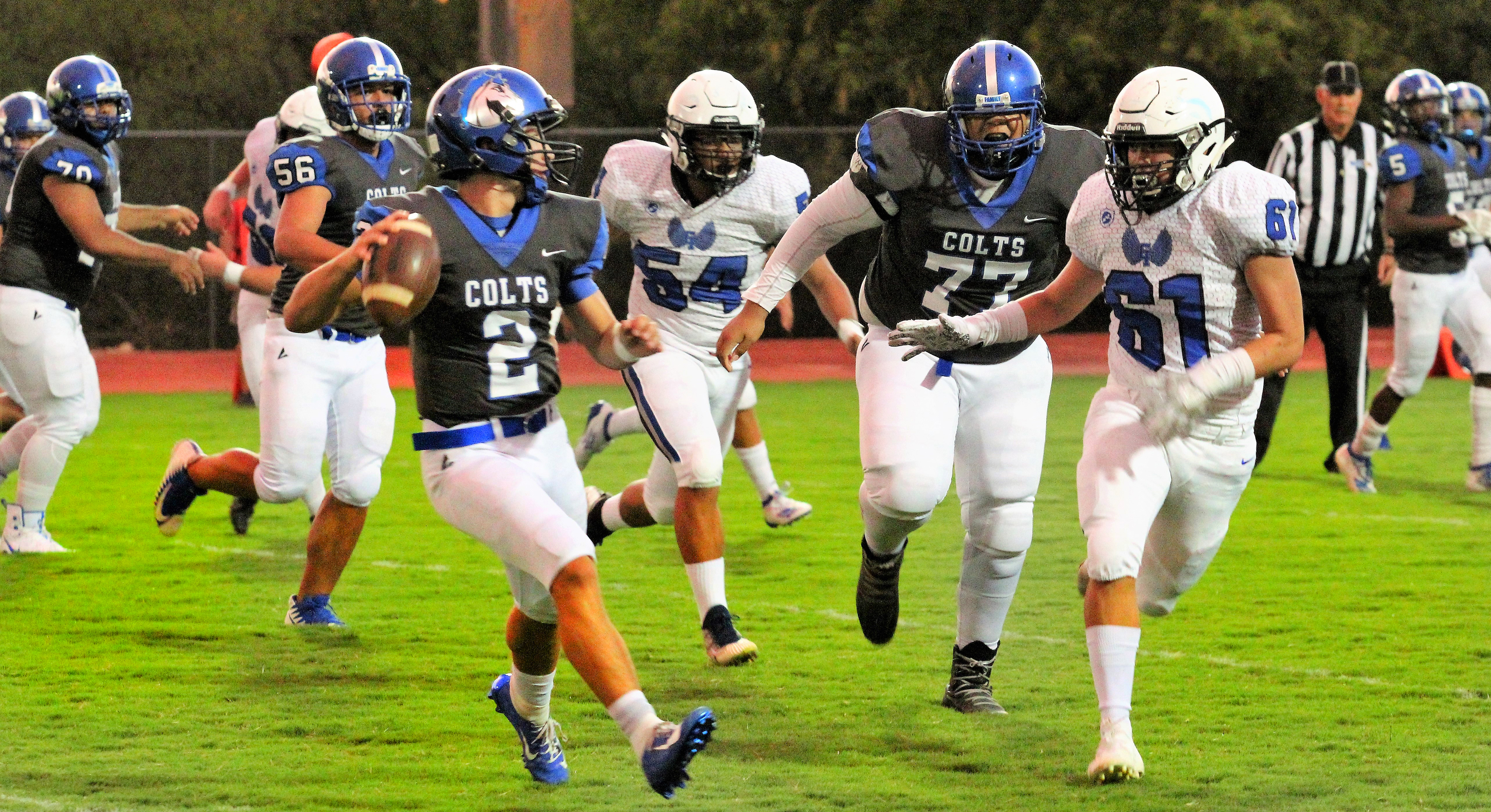 The Caballeros lost six of their top offensive players and 10 of their top defensive stoppers to graduation and that proved too much to overcome against the Dorados Friday night. Flowing Wells beat Canyon del Oro in a 38-37 thriller last year but that is now a distant memory to the Green and Gold thanks to a 59-0 win at home this year.

CDO is hoping to fill the void and jump to the top of the 4A rankings come playoff time.

The Badgers move to 1-0 in the 6A Metro Region thanks to a 43-0 statement over Maryvale. Tucson finished with a No. 20 ranking last year and missed the playoffs but the Open Division should bring new life this year.

Tucson leads the series 2-0, including a 63-6 victory over the Panthers last year. 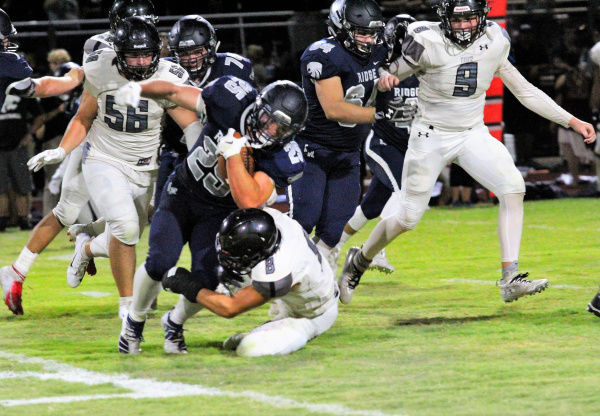 (Brandon Barrios is stopped after a short gain by Brandon Devoy/Andy Morales/AZPreps365.com)

Cameron Drescher put the Nighthawks on the board with a 30-yard interception return in the final second of the first quarter and then Drescher followed that up with a 48-yard TD reception from Jack Greenfield before the half. Still not done, Hudson Thompson caught a short TD to give the Nighthawks a 21-0 lead. The Mountain Lions scored in the third quarter but couldn’t capitalize on several mistakes the rest of the way.

Mountain View started out 0-5 last year and missed the playoffs.

Ironwood Ridge holds an 11-2 record over Mountain View dating back to 2007.

The Huskies dominated from beginning to end in a 55-3 win over the Tigers.

The series between the two teams is now tied at 1-1.

The series between the two teams is 1-1.

The Colts dominated after a close first half. An 8-6 lead held until Jovoni Borbon hit Kemish Riley from 30 yards out with under a minute to go and then Riley pulled down a 91-yard TD pass to give the Colts a 22-6 lead at the half.

Buena now holds a 3-1 record over Catalina Foothills since 1995 but the two teams did not play from 1997 to last year when the Falcons pulled out a 28-17 win.

The Hawks beat Amphitheater 52-20 to open the season.

Buckeye holds a 2-0 record over Amphitheater thanks to a 51-7 win over the Panthers last year.

The Lions dominated in a 42-0 win over the Hawks at home.

It looks like the Dust Devils are back thanks to a 34-18 win over the Mustangs.

The Wildcats didn’t have a varsity program from 2012 to this year.

Game rescheduled due to weather conditions.

Tanque Verde holds a 1-0 lead on Douglas thanks to a forfeit from last year. The Bulldogs beat Tanque Verde 55-6 last year but the team had to forfeit six games last year.

Fort Thomas holds a 2-1 record over Baboquivari dating back to 2015.

Game was cancelled due to weather.