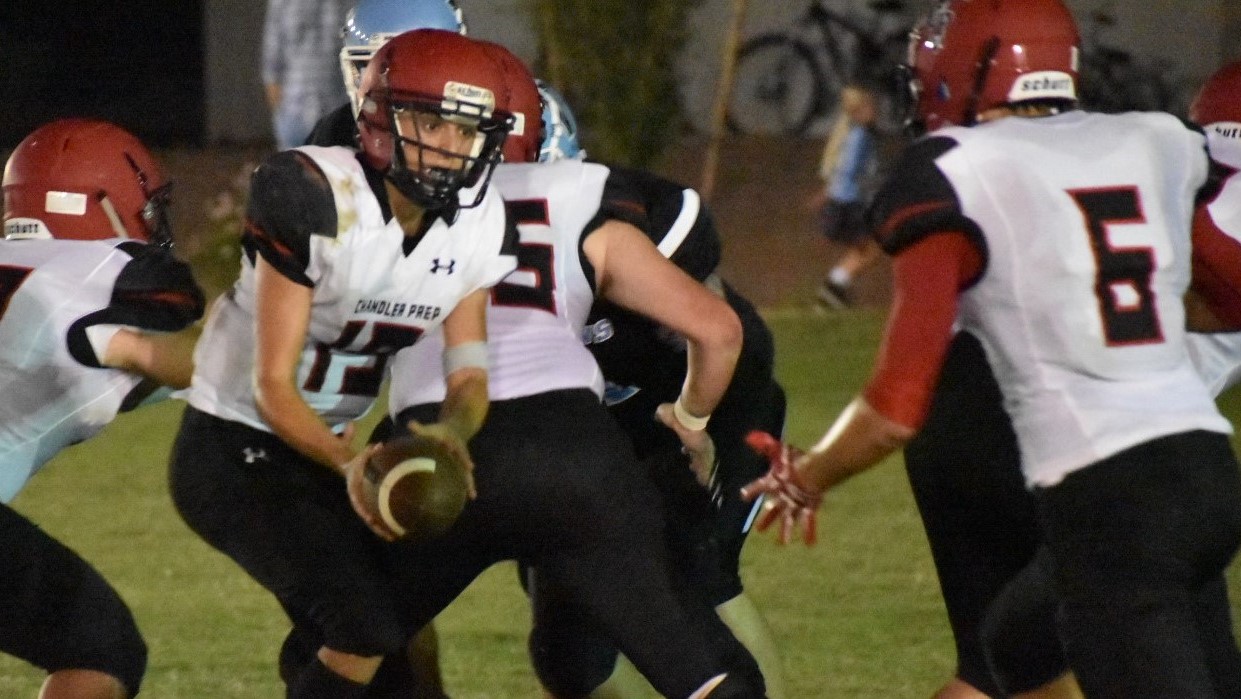 The Titans were on the road again for their third game of the season Friday, September 6, and they brought a strong offense that was a struggle for the Veritas defense to handle. Unfortunately, the Falcons matched the offensive intensity and pushed the Titan defense to its limits, ultimately winning the game by seven in the last four minutes of the game.

The Titan offense did most of their damage on the ground, with junior running back, Sam Martin piling up rushing yards, including a five-yard push to a touchdown. Additionally, junior running back, Aidan Daly ran in for a touchdown and a 2pt conversion in the third quarter for the Titan lead. Quarterback, Reese Vilaboy, a strong rushing threat as well, ran himself for two first downs and a touchdown. Apart from the Titan rushing offense, Vilaboy threw regularly to receivers Andrew Cook and Christian LeClaire for good yardage and threw a screen to senior Quenton Barger who delivered a touchdown pass to Andrew Cook. Unfortunately, Vilaboy struggled at the end of the fourth quarter throwing two interceptions, the second of which ended the game.

Sophomore backup quarterback, Caleb Yeung made his first Varsity appearance as quarterback, stepping in for a play as Vilaboy had helmet troubles near the end of the first quarter. With the ball on the Falcons 25-yard line, Yeung cut Veritas’ lead to six, throwing a beautiful pass to wide receiver, Andrew Cook in the end-zone. Caleb credits Cook for his first Varsity touchdown saying,

“I knew I would just throw it up and Andrew would go and get it. He has like super jumps. He has great hands so I just threw it up for him to get.”

The Titans hard working defense prevented what could have been a lopsided game for the Falcons. Three seniors on the Titans shined in this area. Defensive tackle, Isaiah Usher did his share of slamming down the Falcon’s offense and had some good returns as a part of the kick return team. He also blocked Veritas’ first extra point attempt. Cornerback, Cameron Nikjou grabbed one interception that put the Titans in the red zone, and had one fumble recovery on a muffed punt that led to Vilaboy’s touchdown. Finally, senior, but first year player, Christian LeClaire, already shining as an offensive receiver next to veteran, Andrew Cook, snagged a Falcon pass, ultimately leading to Daly’s touchdown. The Titan defense struggled to keep the Falcon offense under control in the first half, but they came out stronger in the third quarter, giving up very little yardage and only one touchdown at the very end of the quarter. Following a late interception, Veritas ran for a touchdown instead of running out the clock, extending their lead, but giving the Titans one last chance, making this game an even more emotionally charged disappointment for the Titans.

“Great job by Veritas Prep last night. Titans have a hard road ahead and how we handle adversity will be tested.”

Titans face Tonopah Valley for their first home game of the season on Friday, September 13 at 7:00. Titan up.