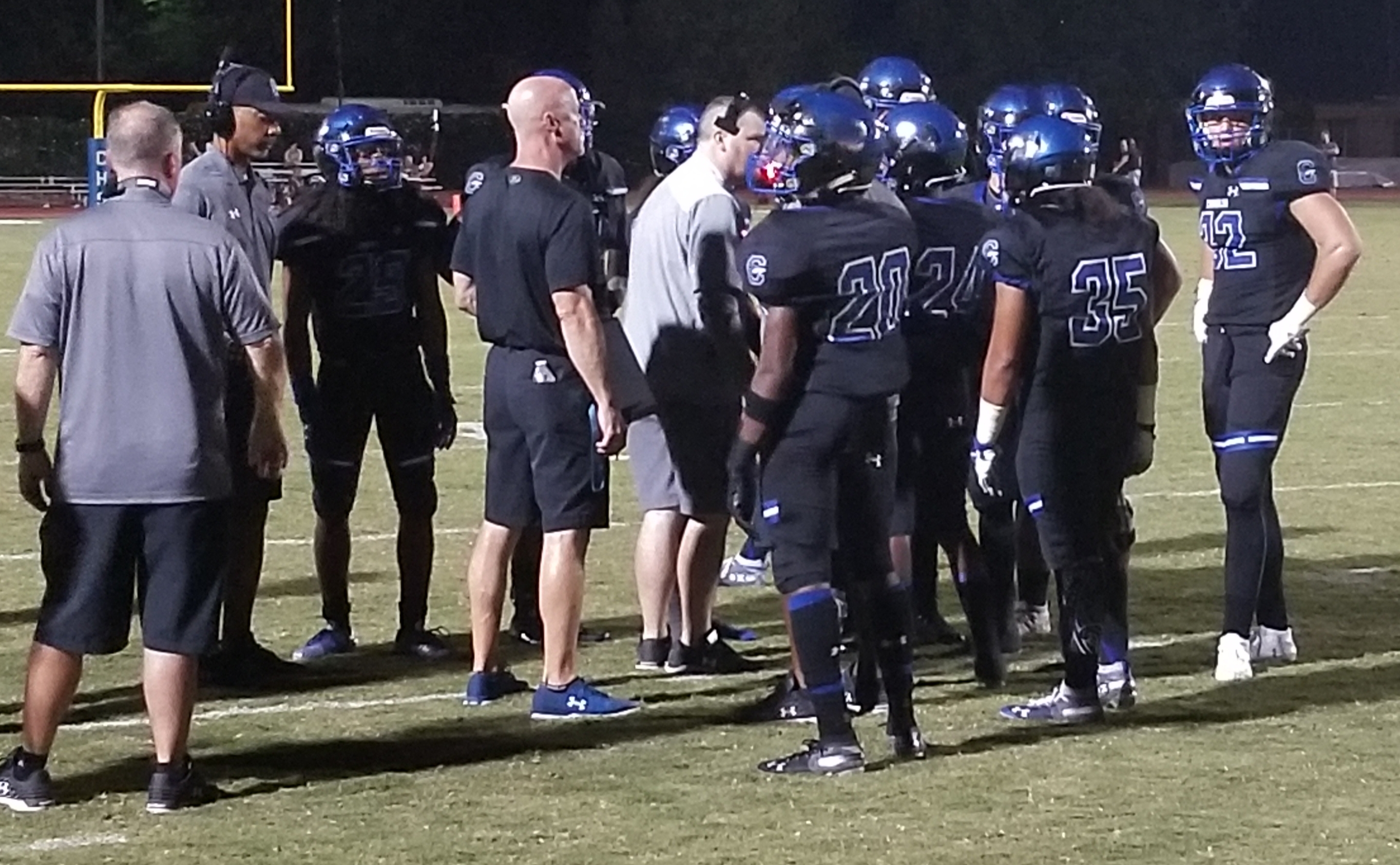 The Wolves huddle as they prepare to play the Pumas. (AZPreps365/Connor Morman)

Offense was on display Friday night at Austin Field.

The Wolves high-powered offense saved its best for regional play, scoring 84 points in a victory over regional rival Perry.

However, the defense struggled to contain the Pumas, who scored 49 points of their own against a Wolves defense that had only given up 38 points total in its first five games.

“We had our issues…” coach Rick Garretson said. “I wasn’t happy with it, so we’ll work on that and get ready for next week.”

This game started out as a shootout, with both teams moving up and down the field at will, putting up points in a hurry. With a 21-14 lead late in the first quarter, the Wolves offense took control.

The Wolves (6-0) scored touchdowns on all of their first nine possessions of the game, a stretch that spanned all the way into the third quarter.

“It was a wonderful night for all of us,” junior running back Eli Sanders said. “We ran well, everybody caught well, Mikey (Keene) had a great game passing.”

Sanders made his return to the Wolves offense after a five-game absence, sharing carries with senior Dae Dae Hunter. Sanders and Hunter broke off big gain after big gain all game long, combining to score eight of the Wolves 12 touchdowns.

“We’ve been running the ball well all season, but now when you have a runner like him, with his power and his speed, it adds to the scenario,” Garretson said of Sanders’ return. “It’s a boost, there’s no question, but whoever we put back there is a game-breaker, every one of them.”

Sanders admits missing the first five games was tough, but he had plenty of help to get through it.

“Everybody kept me engaged in the game,” Sanders said. “Everyone helped me through these five weeks. Coming in tonight, I was prepared. I couldn’t ask the coaches to prepare me any better, and I love all my teammates.”

On the other side of the ball, the Wolves defense struggled against the Pumas high-powered offense. Quarterback and Louisville commit Chubba Purdy got the job done with his arm as well as his legs, connecting with his receivers for big plays or keeping the ball and penetrating deep into the Wolves defense. Purdy scored three touchdowns on the ground and three through the air.

“Chubba is a great player,” Garretson said. “Chubba makes plays, and that’s why he’s going to Louisville. He’s a big kid and a dynamic player.”

Purdy and the Pumas offense presented problems all game long for the Wolves defense, a group that was dominant through five games.

“I think they prepared very well,” senior linebacker Malik Reed said. “They’re probably the most complete team we’ve seen. They present a lot of formations. They’re a good team with a great quarterback.”

Even though the Wolves defense struggled, they could take comfort in knowing their offense wasn’t going to let them down.

“That made us feel way more secure,” Reed said. “We knew we were giving up points, but every touchdown Perry scored, our offense scored too. It was good to know we had a blanket and the offense was going to do what they do regardless.”