6A FB: All corners of the Valley covered in semis 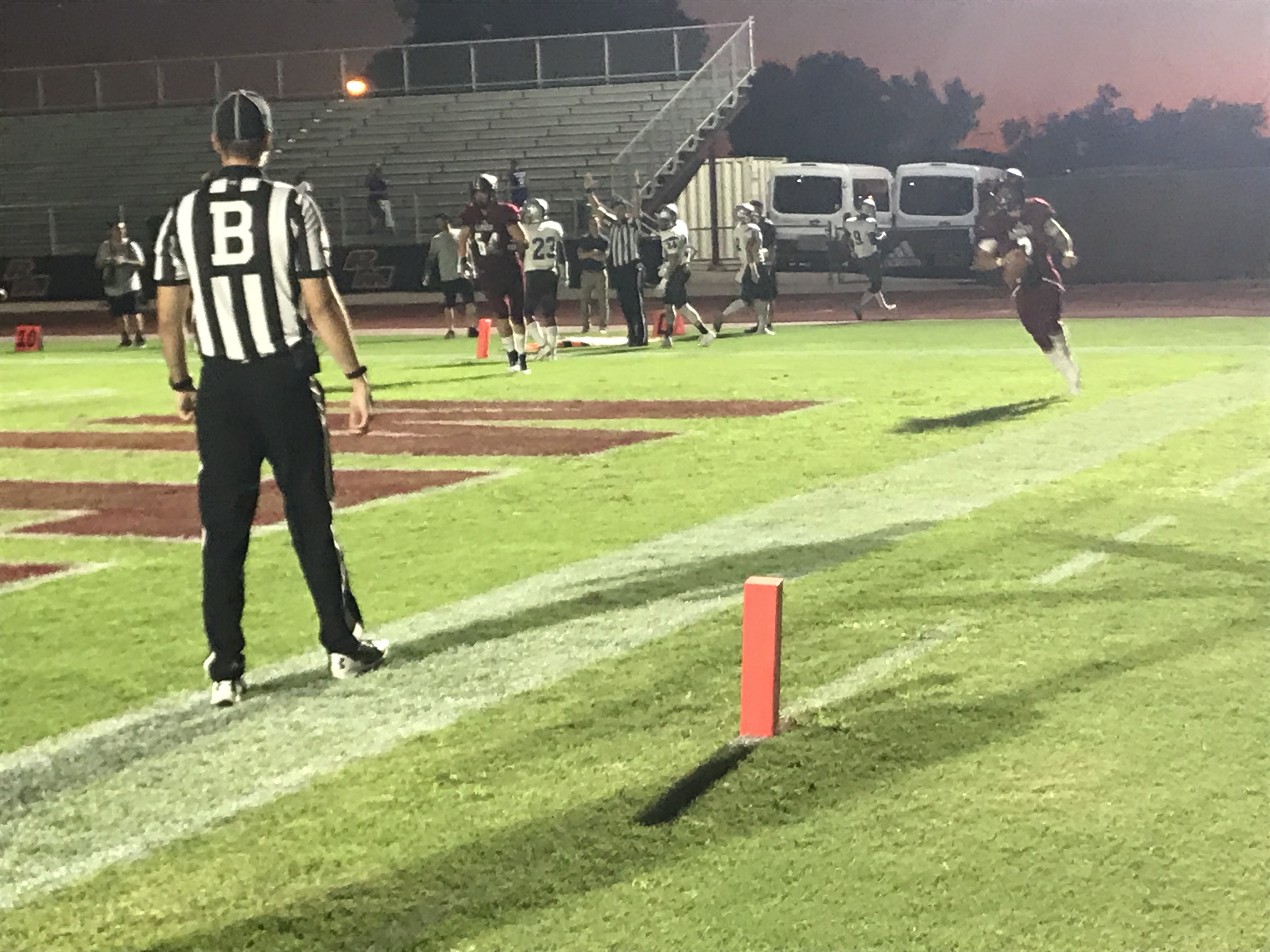 Red Mountain seeks to continue its trek to a 6A title game with more scoring plays like this as the Mountain Lions battle Queen Creek in the semis this week. (AzPreps365 photo)

How they got here: Red Mountain's only loss was a four-overtime affair with Perry, that fell a two-point conversion shy of the Mountain Lions being perfect to date. Their next closest game was last week vs. Desert Ridge. Red Mountain has won nine games in a row and outscored opponents, 599-286.  Red Mountain last played for a championship in 2001 when it won the second of back-back titles .Queen Creek suddenly found itself as the regular season wound down. The Bulldogs suffered blowout losses to Desert Ridge and Highland late, but got some equilbrium back knocking off  Desert Vista in the regular season finale. An offense that scored 24 points combined in games seven, eight and nine has posted 120 the last three games earning the Bulldogs a semifinal berth for the first time in 6A. Queen Creek last won a state title in 2012, taking the Division III crown (4A equivalent) from Desert Edge. Playoff victories: Red Mountain won its first-round game, 43-14, over Corona del Sol and prevailed 49-35 over Desert Ridge in the quarters. Queen Creek won its first round game, 50-36, over Boulder Creek and triumphed, 27-24, over Highland in the quarters.

Players to watch: Red Mountain's senior backfield of quarterback Hyrum Boren and running backs Deonce Elliott and Ty McElroy have combined for 2,500 rushing yards and 40 TDs. Elliott rushed for a season-high 167 on four carries in the playoff win over Desert Ridge, but left with a knee injury. Boren's enjoyed a big year passing throwing for 1,950 yards and 26 TDs. Jared Wilson and Jackson Beecher are two of Boren's top targets - Wilson 51 receptions, 871 yards and 11 TDs and Beecher 36 catches, 396 yards, 4 TDs. Defensive end Tre Smith will be noticable by his play. Smith has 16.5 sacks and participated on 79 tackles. Queen Creek has found success running with several backs sharing the ball. Senior Jace Bond is only 59 yards short of 1,000 for the season and help comes from seior Dayson Coleman (549 yards) and junior Trey Reynolds (358 yards). With sophomore quarterback Devon Brown, a transfer, becoming eligible the final week of September, the Bulldogs pulled two-way standout Reynolds from QB duties to begin seasoning Brown. Brown has been up and down, but his best three games have been the last three -- all wins. He's passed for 1,127 yards, 10 TDs and 11 picks. It's receiving corps by committee. Reynolds is the focal point of the defense with 138 tackles.

How they got here: Liberty competes in the Desert Valley Region and suffered three of its four losses to region foes Pinnacle, Chaparral and Mountain Ridge. The Lions otther loss was to Brophy Prep. Libery is the only team of five in the region that has survived the postseason to date (Pinnacle, Chaparral, Mountain Ridge and Boulder Creek have been eliminated). A four-game winning streak early was highlighted by victories overplayoff teams  Desert Ridge and Sunrise Mountain. Liberty has reached a championship game once in its history, falling to Centennial in the Division II final in 2014. Desert Vista has a pair of three-game winning streaks. Its losses were the second game (Notre Dame, Sherman Oaks, CA), sixth game (Desert Ridge) and 10th game (Queen Creek). The Thunder have scored at least 24 points in every game. Their last visit to a final was in 2011 when they upset Hamilton in the Division I championship. Playoff victories: Liberty defeated La Joya Community in the first round, 76-28 and defeated Mesa Mountain View in the quarters, 45-28. Desert Vista won its first-round game, 52-26, over Basha and took down Perry, 70-63, in the quarterfinals.

Players to watch: Liberty favors the ground game with two-thirds of its offense for the year running the ball. Senior quarterback Jonah Guevara (743 yards) leads four players with a least 400 yards for the season. Senior Joseph Forney (658 yards, 10 TDs) rushed for 154 yards in the win over Mountain View. Freshman Zaccheus Cooper (584 yards) added 145 yards in the game last week. and Guevara was just shy of 100 with 94 yards. Leading receivers when the Lions do pass are seniors Gavin Guy (37 receptions, 475 yards) and Carter Hill (26 catches, 412 yards, 8 TDs).  Defenders of note are seniors - lineman Grant Collins, linebacker Isaiah Pittman and defensive back Jax Stam. Collins leads the Lions in sacks with five and Stam and Pittman in tackles with 77 and 67, respectively. Desert Vista boasts gritty senior quarterback Parker Navarro, who has thrown for 2,525 yards and 28 TDs and rushed for another 928 and nine TDs. The brothers Grubb - senior Tyson and sophomore Devon -  have combined for 1,428 yards and 18 TDs. Leading the receiving corps is senior Elijah Ervin, who racked up eight catches for 254 yards and four TDs last week in the shootout with Perry. Ervin's 1,402 receiving yards, 18 TDs are roughly 60 percent of the passing-game yardage. The Thunder defense has allowed nearly 30 points a game. Eleven players have combined for the team's 19 sacks. Top defenders are - D-back-safety Taron Thomas and lineman Jaylen Johnson, both first-team, all-Central Region selections.