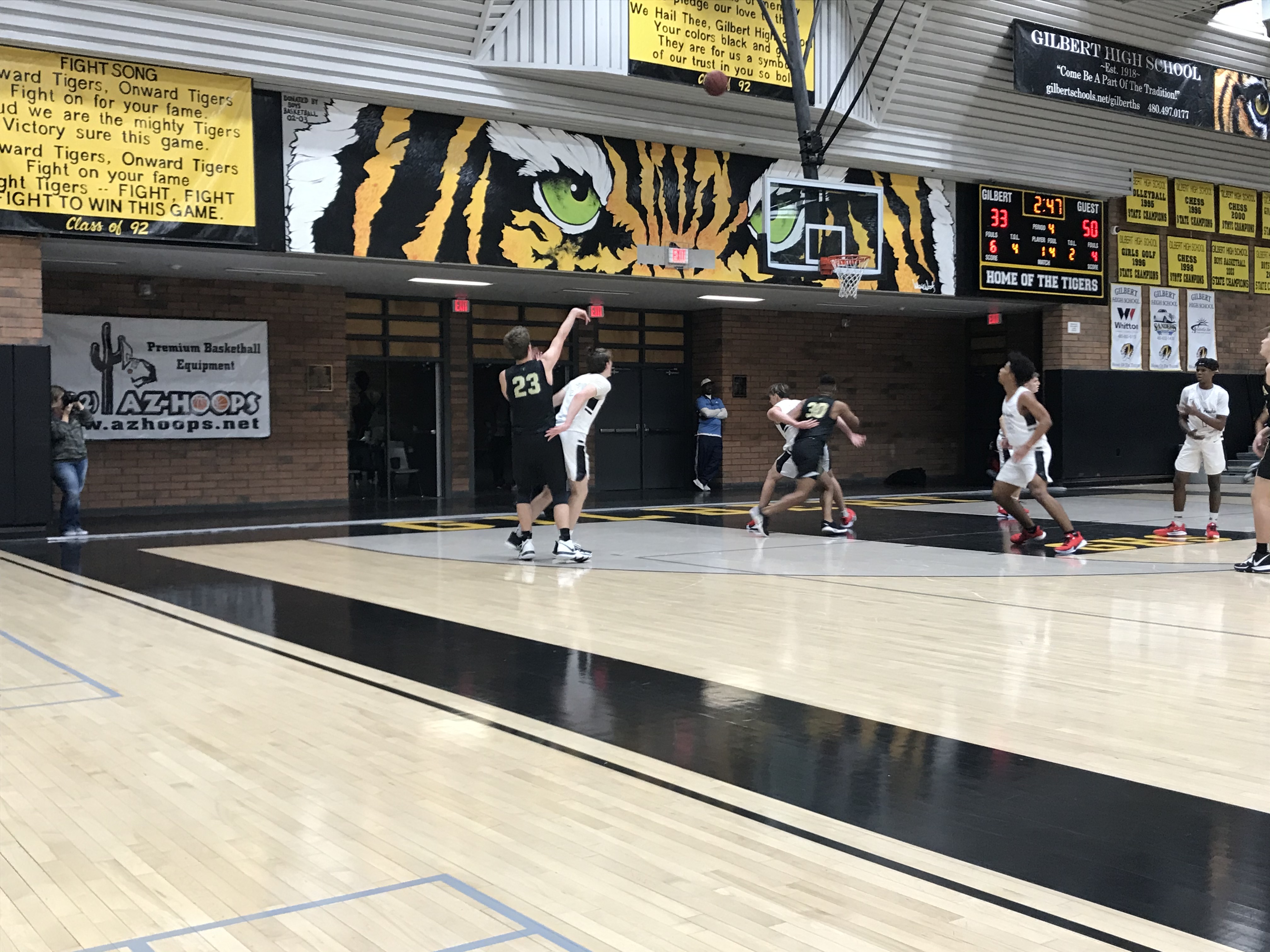 Basha's Landon Schumaker launches a three that connects for the last of his 20 points in the Bears' 63-37 victory over Williams Field at the Welcome to the Jungle Invite at Gilbert High. (AzPreps365 photo).

Host Gilbert High and Desert Ridge managed to remain the lone unbeaten teams Tuesday at 2-0 after Day 2 of the annual Welcome to the Jungle boys basketball Invitational.

Gilbert, the defending 5A state champion, has been the most impressive team of the tournament. The Tigers won their opener, 60-39, over Valley Vista on Monday. The Tigers notched a 63-48 victory over Chandler (1-1)on Tuesday with seniors Brycen Long, Paul Maldonado and Griffin Lamb leading the way offensively. Long and Maldonado, starters last season, scored 17 and 16 points, respectively. Lamb, who missed the entire season last year, chimed in with 15 points and double-digits in rebounds. Defensively guards Jaqwuan Myles and Tampa Scott teamed up to pester Chandler's top scorer - junior point guard Carson Kelly. Kelly finished with a game-high 18 points, but scored 12 of those points in the second quarter when Myles and Scott were on the bench in foul trouble. Kelly was scoreless in the opening period. Sophomore Mekhi Mason added 17 points for Chandler, 15 in the second half.

Desert Ridge, which topped Basha 63-60 on Monday, held off a late Perry rally to edge the Pumas, 52-50. Late free throws by Joe Kelsey and Kaden Kennedy gave the Jaguars the edge. Kelsey led all scorers with 16 points, including four 3-pointers. Caleb Alonso added 13 points. Desert Ridge led by as many as 11 in the second quarter (22-11) onlye to see Perry surge in front at intermission, 26-24. The Jaguars regained the lead heading to the final period and led 47-40 with 2:23 to play. Perry (1-1) got within 52-50 thanks to some rugged inside play from Duke Brennan, who led the Pumas with 14 points. Dylan Anderson, a 6-foot-10 sophomore and the focal point fo Perry's offense this season,  finished with 13 point. He scored just three points in the second half .

BASHA 63, WILLIAMS FIELD 37: The Bears (1-1) used a a torrid second-half in all phases to top the Black Hawks (0-2). Freshman Landon Schumaker led Basha and all scorers with 20 points. Schumaker was a presence in all phases. Senior guard CJ Noder added 18 points and helped Basha begin its second-half getaway sinking three consecutive threes and tallying 11 of his points in the period. It allowed Basha to stretch a 25-21 halftime lead to 44-26 heading to the final period. Montez Taylor led Williams Field with 15 points.

CORONA DEL SOL 55, VALLEY VISTA 43: The Aztecs used balanced scoring and  a 9-0 run over a four-minute stretch of the final period to knock off the Monsoon. Junior guard Donaven Ocasio topped Corona in scoring off the bench with 12 points. Starters Anthony Irvin (10 points) and Eric Blackwell and Demarco Smith (nine points apiece) paced Corona (1-1). Valley Vista (0-2) was led in scoring by Elijah Thomas with a game-high 13 points.