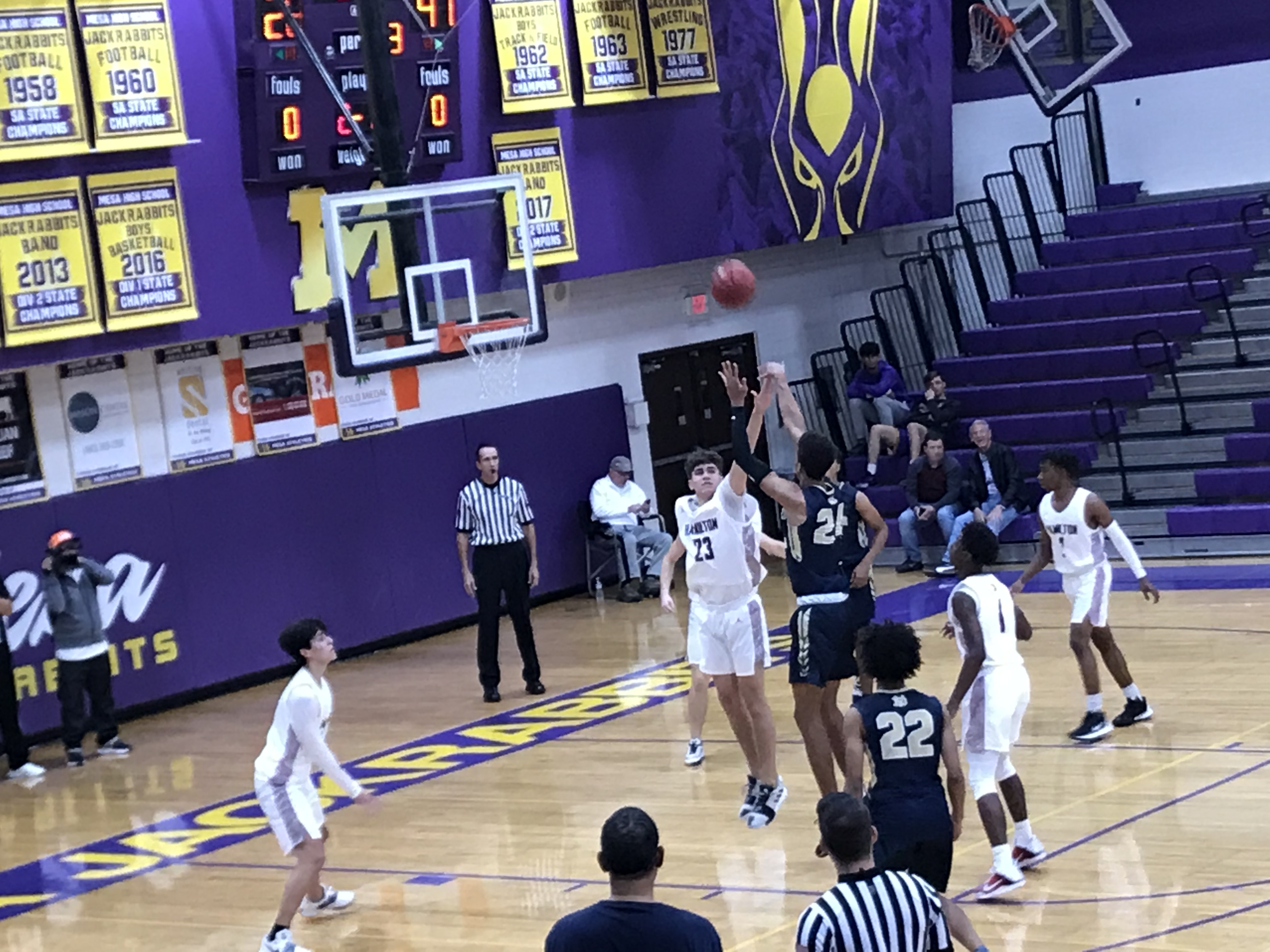 Desert Vista's senior forward Osasere Ighodaro fires up two of his 15 points in the Thunder's balanced scoring attack in its 77-49 win over Hamilton at the Fear the Hop Invite. (AzPreps365 photo)

The Thunder, figured to be one of the top contenders this season for the 6A crown, were smooth in beating Hamilton with ease, 77-49, on Wednesday night at Jackrabbit Gym. In the second semifinal, Drew Shumway had himself a game in just one quarter - saving his best for the final period - helping Mesa to a come-from-behind 61-55 victory over Desert Mountain.

Here's a breakdown of the triumphs by the Thunder and Jackrabbits:

The game was somewaht within reach for Hamiton at halftime, down 39-28, but it turned into a rout quickly in the third quarter as Desert Vista outscored Hamilton 26-9 in the period. King netted 13 points in the quarter sinking four threes. Desert Vista finished making 12 threes and ran its record to 3-0 adding to previous tournament wins over Seton Catholic and Casteel. Hamilton (2-1), playing without its top player - senior Jamar Brown - just out from football - got 20 points from senior guard Christian Valle and 10 from senior guard Omar Knight. Valle connected on five threes.

Mesa-Desert Mountain: Mesa's Drew Shumway took it upon himself to rally Mesa as the final period began with the Jackrabbits down, 39-34, to Desert Mountain. Shumway, a 6-1 junior, scored Mesa's first eight points of the quarter and keyed a 18-7 run putting Mesa in front to stay. Shumway scored 16 points in the quarter and finished with a game-high 22. Senior Tyton Cummard, who sank a three in the early fourth-quarter run, finished with 14 points.Junior guard Steven Cervantes, who led Mesa in scoring the opening half with 10, ended up with 14. Mesa played without two injured players who saw time last year - this year's co-captains Julian Jackson (broken arm) and Dylan Moore. Desert Mountain junior guard Carson Biggs led the Wolves with 19 points.Tony Elliott added eight points and Justice Rogersand Swade Wing chipped in seven points apiece.