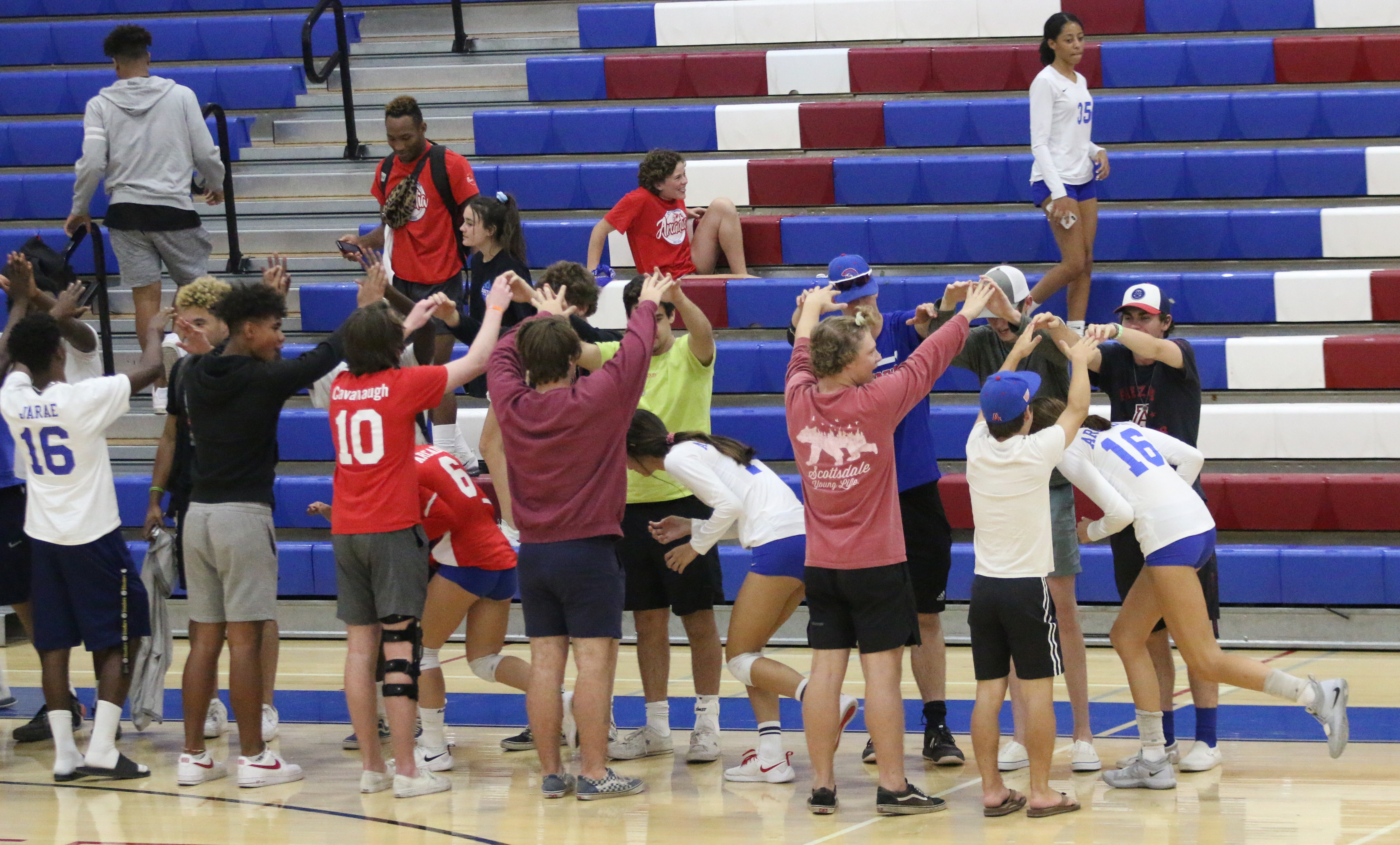 Students from The Chaos Corner make a tunnel for players to run under after the team had won. (Photo: Josh Weisbly)

The history of student sections is rich in college sports like basketball and football. At Arcadia High School, however, they have a student section of their own to boast for the varsity volleyball team.

The Chaos Corner, as they have been named, attends every home game that the Arcadia Titans have. They always occupy the same section of bleachers in the gymnasium, ready and waiting eagerly for every set that is going to be played, and the noise increases as the students pour into the section.

“Our student section, the Chaos Corner, has done a great job this year of rallying the troops and getting our students involved,” Arcadia Athletic Director Rudy Alvarado said. “They make our sporting events the place to be, and I only see it growing as the year goes on.”

From having chant after chant encouraging Arcadia’s varsity squad, to the first row of the section diving on the floor as the opposing team makes an error or misses a play, the section shows its dedication. Always animated and showing emotion, the students can create an environment that helps invigorate the Titans players.

“Whenever the energy is down, they bring it up, and it gets everyone else on the floor fired up,” Titans sophomore Bella Hanson said.

Titans players are able to see this pre-game when they are being introduced by the announcer, as each is met with roaring applause. During this time they have also have seen the waving and flapping of students’ arms, as the section awaits t-shirts that will be tossed into the crowd after a player’s name has been called.

For the players, it is not just a way for them to find encouragement, but they are also to look to the Chaos Corner for some needed comedic relief on the court.

“Whether it’s volleyball related or not, they’re screaming some of the most random stuff, and it is really funny and fun,” Titans senior captain Zora Carrier said.

Not only do the players have admiration and appreciation for the students who make up the section, but the coaches also acknowledge the students in the stands.

“Our Chaos Corner has been amazing, and continues to come out in large numbers to support us, despite the fact that our matches are always on school nights,” assistant coach Adrian Chang said.

Though the crowd is usually a decent-sized number of students, the Chaos Corner was able to reach its peak when the Titans had a rivalry game against Mesquite, which was due in part to a little help from the boys basketball coach and players of Arcadia.

“I would like to mention and thank Stephen Danford, our men's basketball coach. Upon hearing that we had a rivalry game against Mesquite, he canceled practice so all his players could come cheer us on instead,” Chang said.

That rivalry game with Mesquite was perhaps the biggest the section had been. Every serve of the match was met with the jazz fingers, and every point scored was met with deafening cheering from the section.

While the credit for the 3-0 victory against Mesquite cannot be put solely on the back of the student section, it is clear that, if anything, the Chaos Corner was able to electrify the gymnasium with their cheering and heartening rally cries.

The Chaos Corner rewarded the Titans players as they do after every win with a tunnel made out of the arms of students in which the players run under.