A commitment to Involvement 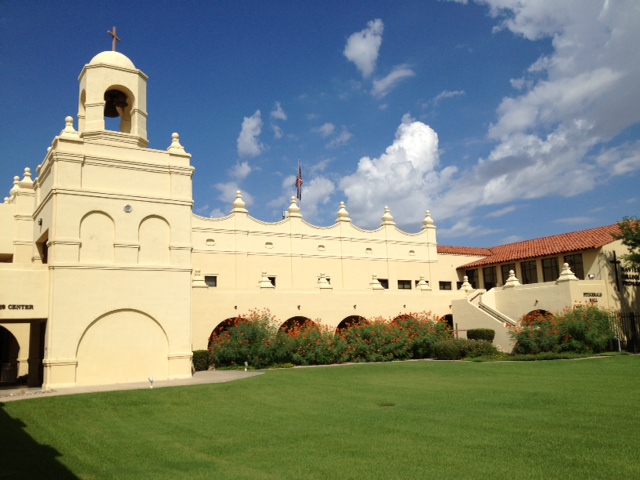 Whether it be having 350-plus members in their key club or helping to create a freshman tennis team, every staff member at Xavier College Prep is looking to find a way to get their students involved.

Xavier's graduating class of 2019 had all but two girls involved in some type of activity, ranging from esports to volleyball. They want these girls to be involved.

Athletic Director Sister Lynn Winsor thinks that these students can develop the habit of being involved in their community and in their college wherever they go.

“Our kids have to have 50 hours of volunteer hours over their four years,” Lynn said.  “Once they get involved, they triple that.”

Being involved in your school and service to others is a part of the mission at Xavier. They pride themselves on getting everyone involved and helping anyone they can.

The teachers and staff embody the same standards that their students meet. Associate supervisor for athletics Susan Contreras has coached many teams at Xavier. She has coached volleyball and badminton. Their badminton program is for every grade, and at all their matches they try get everyone involved.

Contreras thinks that even with all the options they have available for their students it takes students who have great drive and want to be involved.

“They have to have the drive to want more,” Contreras said. “They want to be better and continue to give to other people."

Video games are something that people could have played growing up, played with their kids or still play now as just a way to pass time.

Now video games can be played as a competitive sport for all ages and you can even have a professional career in it. This is exactly what Esports are.

Esports have grown so much around the world to the point that you can compete in a world tournament and win $3 million.

For Xavier, they wanted to create something that would allow the girls at their school to compete together while playing video games that they like and involve teamwork.

Starting with things like the Esports program, Xavier was one of the first schools to create an Esports program before the Arizona Interscholastic Association made it official this fall.

Building something from the ground up requires help from others.

Erika Pienado, head coach of the Xavier Esports team, said earlier in the year how helpful and willing the school was to assist her in getting the program started.

“I’m just really grateful that the school was able to provide this environment,” Peinado said. “It's all about space.”

The Esports program operates from their computer lab where they have their practices.

With all that Xavier has to offer, Peinado stated that it can be difficult to get the word around that this club is available to everyone and showing the girls who didn’t know about the club that it could be something for them.

Peinado said that once the girls were able to try it out and know what Esports were all about, they really wanted to stay.

“Once they actually got in and started playing, they didn’t want to leave the computer lab,” Peinado said.

Sophia Pauly, a first-year player on the team, said she likes the competitive environment and how team-based the games are.

They even were able to get the club started and set up matches without the assistance from the AIA. It took the whole athletic department to be involved to help getting the program up and running.

Winsor was all for getting the program going knowing the different type of group it would bring to Xavier and get more students involved.

Freshman tennis was also something that Xavier helped create for its students.

For a lot of sports in high school, there are cuts that are made for people to make the team. This obviously can be for competitive reasons and just because it's difficult to have large teams.

This isn’t a problem at Xavier, especially for the freshman tennis team. No cuts are made on their team, so everyone gets a chance to be a part of a team as soon as they start their freshman year of high school.

This year’s freshman tennis team had 73 girls, according to head coach Laurie Martin.

This started in 2007 for Xavier.  Martin helped create the opportunity that allowed freshman to get involved on the tennis team.

Martin said she was teaching tennis to kids who had a freshman program and she thought that Xavier needed one. It started with filling a need for kids who want to get involved.

Martin would first need to get the approval and help from Xavier to help get this created. Once again Xavier was more than ready to help if it meant their students would have more opportunities to get involved.

“I went to Sister Lynn and she called some of the athletic directors,” Martin said. “They welcomed us with open arms.”

Martin said it is very important for students socially to feel connected to a team.

“Knowing only one person is a tough way to start high school,” Martin said. “By having that freshman program, they are able to connect right away with a group of girls and feel a part of something bigger than themselves. “

Erica Stutz and Emily Even, senior tennis players for Xavier, both think they have benefited from being able to start playing their freshman year.

Stutz said that freshman tennis was a great way to meet other girls and really helped from a social perspective.

Freshman tennis was great partly because there were no cuts. Not cutting any players allows for a wide array of people to be involved in the sport.

“Everyone can play even if you’ve never picked up a racket before,” Even said. “It gave me the opportunity to meet people I normally wouldn’t meet or didn’t have class with. It allowed me to expand my social circle.”

Being a part of something early in high school can lead to being more involved throughout the four years you are there. This type of involvement for Stutz came in the form of helping to fundraise for tennis equipment for kids who wanted to learn how to play tennis.

“I ran a drive sophomore and freshman year and we gathered 20 tennis bags and 20 racquets for the kids,” Stutz said.

For Even, it was the skills that she acquired while on the tennis court that will help her after high school that she gained from playing.

Even said that she learned how to properly support her teammates because everyone needs support in different ways. She was also able to learn what it truly is like to be in a collaborative environment and the best way to work together.

“Being a team has helped me in other environments,” Even said. “Realizing that one, everyone needs to be supported differently and two, how to work together and how to keep everyone engaged and feeling supported.

Contreras said that each program and coach has developed these students to also look past just what they're doing in their high school sport.

Each sports program has community service built within them. Contreras thinks that this allows for the girls who are playing that giving to other people means just as much as playing the game.

“These girls leave the program with a sense of family and friends,” Contreras said. “We see that in what they do when they leave here.”

Xavier PrincipalJoan Nuckols think that the service projects that are in every club allows each student to get involved with people who need their help.

She also said that leadership is a great thing that students gain when joining these clubs.

“One of the things that is most important about the clubs is the leadership abilities it gives or the potential leaderships abilities for students,” Nuckols said.

For Xavier this is a group effort to get everyone involved. It takes the staff realizing that there are always new ways to get students involved. This can be creating a new club or understanding that some sports need to have a freshman team so everyone can be involved.

It takes the students to continue to be motivated about getting involved and gaining new skills.

When both sides do their part, it makes for a great four-year experience at Xavier.