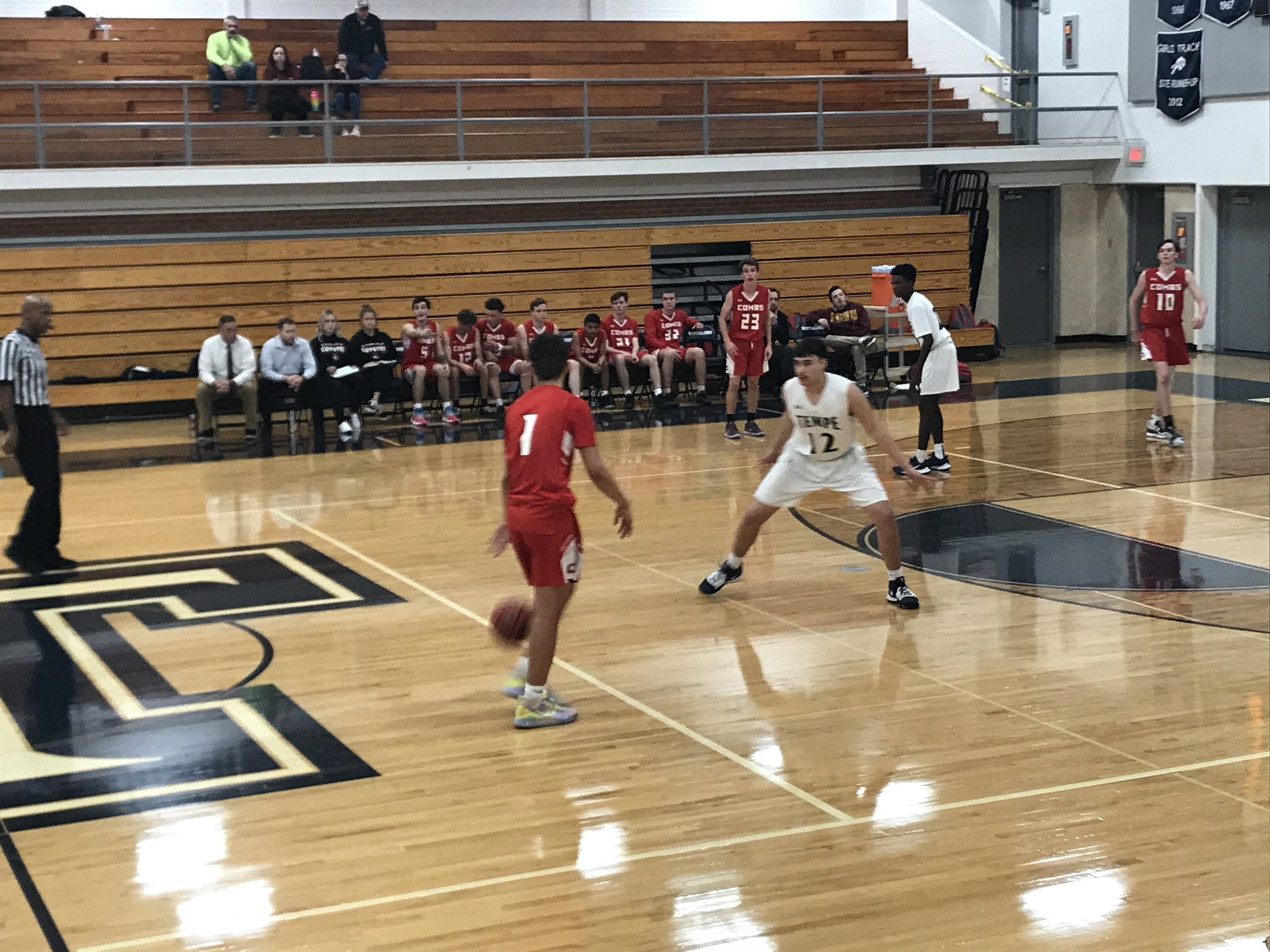 Combs senior Isaac Arrollado (1) dribbles in one of his rare docile moments of the fourth quarter as he tallied 13 points in the period in helping the Coyotes knock off Tempe High. (AzPreps365 photo)

Combs brushed back several Tempe High runs during the course of Wednesday night's boys basketball game. If the host Buffaloes had a final push in the final quarter it was extinguished by an offensive barrage brought by the Coyotes' Isaac Arrollado.

Arrollado poured in 13 of his game-high 21 points in a five-minute span late guiding Combs to a 61-45 victory over Tempe in a 4A non-region game.

"That's kind of how he goes," Combs coach Ben Johnson said of his senior guard-forwar. "We got on him because a lot of times his defense leads to offense. He can score in bunches. He was on at the right time."

Combs ran its record to 11-5 and 4-4 in power-ranking games. The Coyotes, who have improved each year of Johnson's three seasons as mentor, is one win shy of equaling their win total of last year. Tempe lost for the 10th time in 13 games and fell to 2-5 in prg.

Combs led all but two very brief intervals of the first period and by as many as nine points heading to the fourth quarter. a 38-31 lead in the opeining minute of the fourth melted to 38-36 with 6:40 to play. That's about the time Arrollado re-entered after a couple minute breather.

After a Tempe timeout at that point, Arrollado sanke threes from the top of the key and the left baseline plus a layup to bump the margin to 46-40.Tempe bounced back again cutting the deficit to 46-4 with 2:46 to go. Tempe hurt itself not positioning itself to defend and inbounds pass at midcourt giving Combs an easy layup by Isaac Lujan (13 points). A few seconds later Arrollado stung the net with his third three of the quarter for a 52-43 advantage with two minutes left. A 9-1 run to the finish ended a tough night for Tempe.Also scoring in double figures along with the two Isaacs was Hasaun Mraz with 10.

"We didn't play well, it was bad basketball," Tempe coach Tom Saltzstein said. "We had bad lapses on two plays late. We had some shots and didn't make a lot of them."

Tempe was led in scoring by Jacob Rosa with 14 points and Cameron Snyder with 10. The Buffaloes strugged from the perimeter against Combs' 2-3 zone, connecting on just 4 of 23 treys. Johnson credited the play of the front two (Isaac Lujan, Mraz and at times Wyatt Larson) for the perimeter pressure.

Tempe plays its third game in as many nights Thursday visiting Thunderbird in a Skyline Region game. Comps also makes it three games in three nights with its first Black Canyon Region game at Dysart.