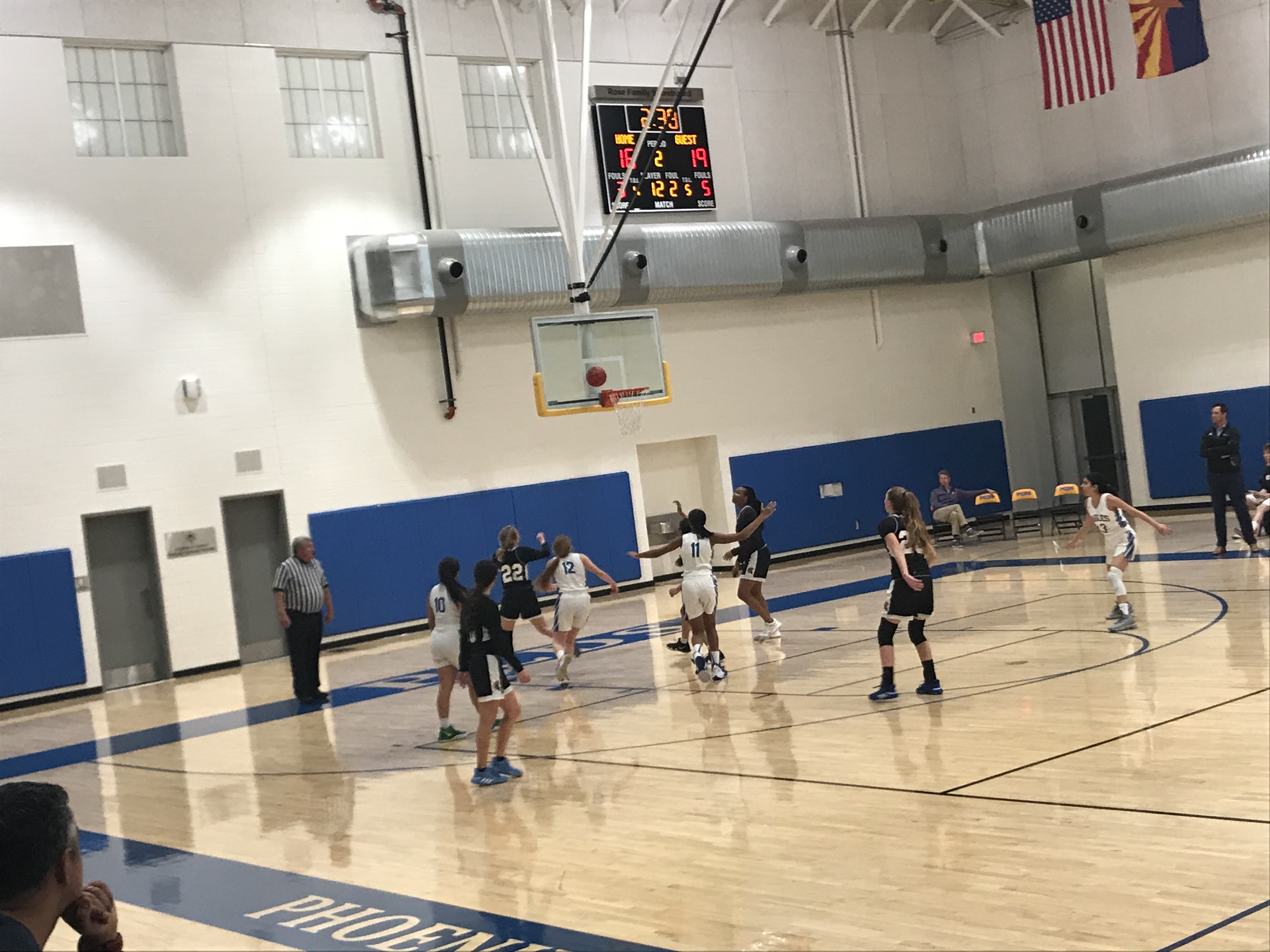 Leading Edge Academy's Morgan Smith (22) converts a short shot in the first half against Phoenix Country Day. PCD rallied in the second half to pull out a 45-42 victory. (AzPreps365 photo)

The girls basketball games between Phoenix Country Day and Leading Edge Academy have been few, mainly because LEA has only been a member of the AIA since the 2015-2016 season. The third meeting ever between the the schools on Wednesday night was similar in closeness, but in the end with a first-time victor.

Freshman Jadynn Jones took over the game in the final four minutes tallying nine of her game-high 16 points as the Eagles nipped the Spartans, 45-42, in a 2A non-region game at PCD.

The teams entered play neck-and-neck in the 2A power rankings - LEA at No. 8 and PCD No. 9. In two earlier meetings - one in postseason in 2017 when LEA finished as 2A runner-up and last year in the regular season - LEA was victorious in both by 2 in the former and six in the latter.

"We have three freshman starting and I knew we were going to have our highs and lows," PCD coach Sean Newland said. "Today was a pretty good high. We competed well."

PCD (8-5 overall, 8-1 power ranking games), trailed after each of the first two periods - 19-14 after one and 23-20 at intermission. The Eagles limited LEA to four points in the third period to take a 34-32 advantage to the final quarter.

The lead in the final period changed hands four times over the first four minutes of the quarter. The last lead change by PCD was courtesy of Jones. She made a strong move to the basket and converted a layup to put the Eagles up 38-37. PCD's next possession saw Jones produce a three-point play via a putback and free throw.

LEA junior Brionna Smith (team-high 15 points) brought her team back with a layin and one of two free throws on a separate trip down the floore with 1:29 left cutting the deficit to 41-40. Jones made two more baskets  - the last with 50 seconds to play making it 45-40. PCD's ability to break LEA's press in the final minutes led to both of Jones' last bit of scoring and was progress after the game's early moments.

"No doubt their press bothered us," Newland said. "We got better as the game went on. Just needed a little reminding on things at times. This team is still growing."

LEA(14-5, 8-2 prg) has known nothing but success under coach Erik Gray in its fourth year competing for 2A supremacy. The Spartans own a state title (2018) and were knocked out last year in the state quarterfinals by eventual champ Alchesay. Prior to the 2016-17 season, LEA was a power in the Canyon Athletic Association.

Playing a steady game on both ends for PCD was junior Sanya Mittal. Mittal scored 12 points and drew the defensive assignment on Brionna Smith. Brionna Smith had 10 points in the first quarter - only five the rest of the way. Morgan Smith tallied in double figures (12) for LEA.