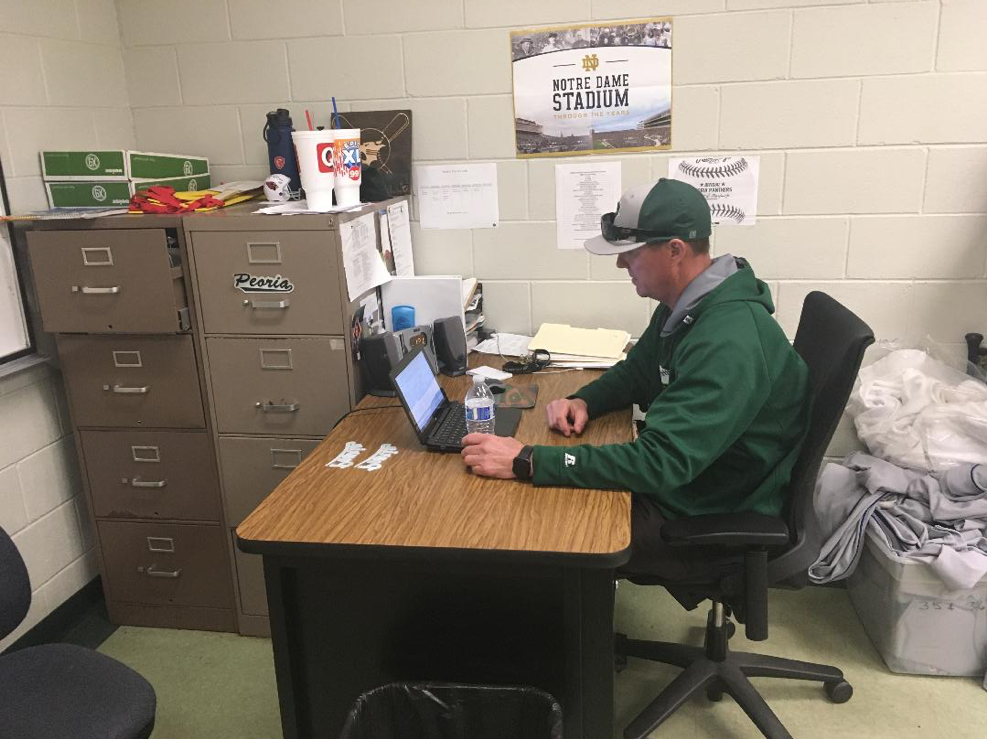 Shawn Sullivan working on his computer prior to practice. (Photo by Kendall Rooker/AZPreps365)

Shawn Sullivan is back home where it all started in the ‘80s. He brought his family this time.

Sullivan, who won one state title as a baseball player at Peoria, is starting his fifth season as the coach.

These days it’s a family affair. He has two nieces who go to school - Nicole and Kennedy. His brother Shane is a history teacher who coaches football. His wife Julie works a couple buildings away from him as the athletic secretary. Their son, Blayden, is a sophomore second baseman.

“It is awesome. (I) always wanted to fit it in my career. The opportunity presented itself,” said Sully, whose overall record is 34-64.

During the mid-80s and early 90s “we were the big guys on the left side of town,” Sully said referring to the championships Peoria won. Peoria played in three straight championship games during his time as a high school student.

Sully also played football and wrestled. “Back then kids played multiple sports… you looked forward to the next sport,” said Sully.

One of his friends during high school was Will Babb, current Peoria football head coach. He was a year ahead of Sullivan and later was his college roommate at NAU. “(Sully) is hard working and takes pride in what he does,” Babb said.

Sully always wanted to be a teacher. He started his coaching career at Centennial High School as a student-teacher. He has coached in the Peoria School District for 22 years.

Sully is proud of Peoria’s tradition. Recently a 1960s graduate came to Sully’s game. He had played baseball and come back for a reunion. He and Sully chatted after the game, and the alumnus left with a hat and t-shirt.

What’s next for the coach? “When it is all set and done… you want kids that can learn from you and become good leaders in our community. Try to reach them and give them something they can walk away with that they learn from being on a team sport,” said Sully.