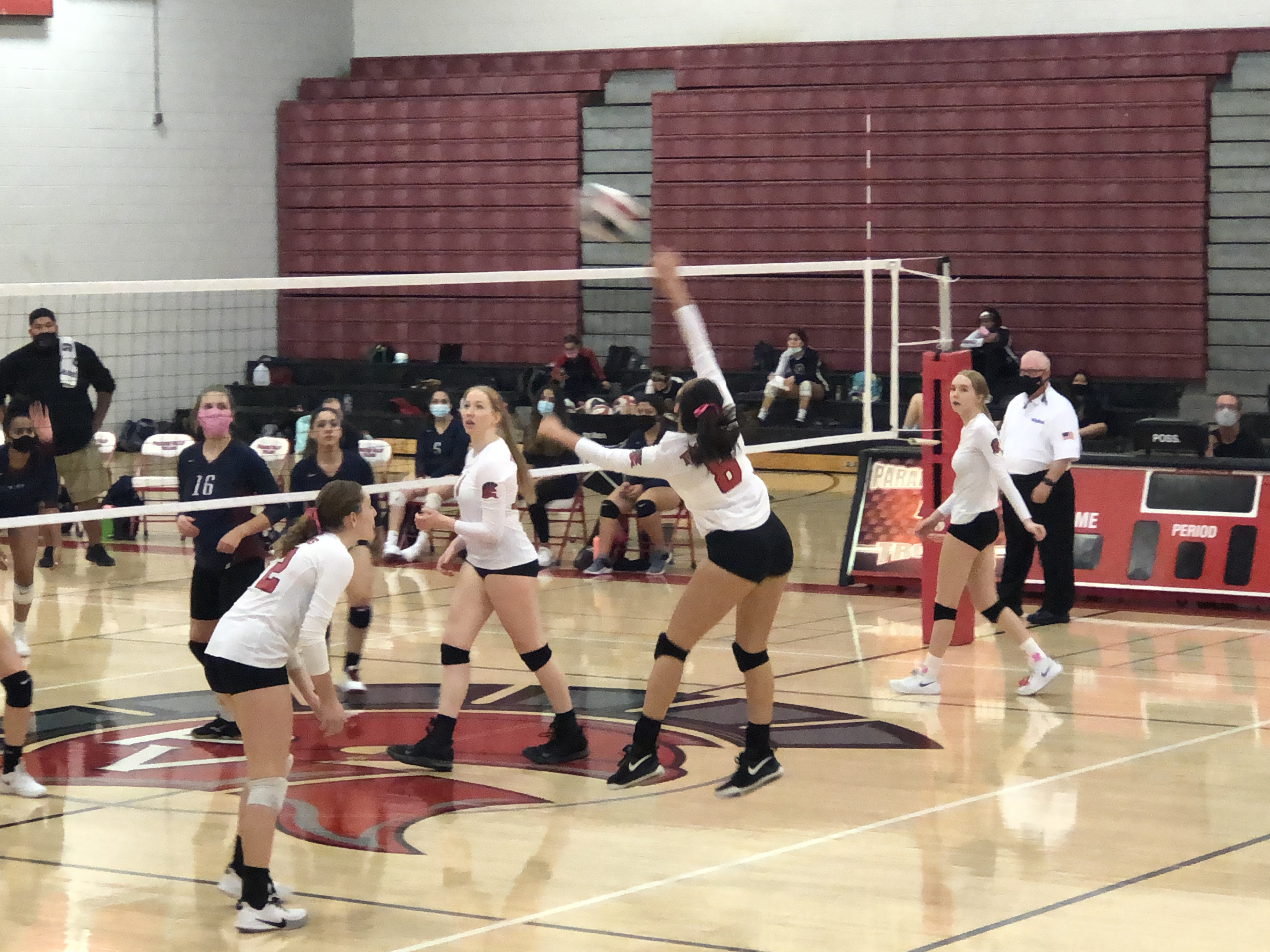 The Paradise Valley High School volleyball team had the visiting McClintock Chargers on low-power mode during their Thursday night victory.

The Chargers, entering the game 0-6 against the 5A, were resilient in the opening sets, but ultimately saw their short bursts outmatched by the Trojans’ consistent attack.

The two teams had met earlier in the season when Paradise Valley took down McClintock in three sets.

With the confidence that her team could repeat that success, Trojans’ head coach Jessica Spencer promoted two freshmen from the JV team and gave them the start in the first set.

“We played around the first game and threw in some girls that normally don’t play so they could get some playing time,” said Spencer. “The challenge was to see if [the upperclassmen] would coach from the sides and cheer them on and they did a really good job with that.”

Freshman Amanda Palisko made her presence known early, serving an ace to knot the score 4-4 in the first set.

However, it was senior Amelia Casebolt who anchored Paradise Valley, scoring four of their first nine points.

The Chargers fought hard in the first two sets but ultimately didn’t have enough battery life to finish either one on top, losing 25-17 and 25-19, respectively.

Late in the second set, it was evident that the Trojans were navigating towards a victory. Junior Emma Parmley struck a ball at breakneck speeds in front of the bewildered McClintock back line.

One play later, the Trojans extended the lead to 21-13 after Madeline Muller casually tipped a ball over the net moments after the Chargers frantically scrambled to even keep it in play.

She stood over the net, both domineering and nonchalant.

By the third set, Emma Parmley pulled the plug on the McClintock upset bid. Her consecutive kills to put the Trojans ahead 12-4 in the third set were assertive and she looked the part of the best player on the court.

"[Emma's] one of our big hitters," coach Spencer said of the junior outside hitter, “She’s an all-around athlete and we’re lucky to have her.”

Paradise Valley went on to win the third set 25-11 and complete the sweep.

It was a much-needed victory for the Trojans on Thursday; they entered the game on a four-game losing streak that included defeats on both Tuesday and Wednesday of the same week.

Emma Parmley recognized the change in atmosphere on the court from earlier in the week.

“It was a lot more energy and talking than yesterday’s game,” she said. “Yesterday, once we started getting down, communication went down also, but today was a lot better.”

Casebolt said, “Today, we were just having more fun.”

The Trojans seek to carry their newfound confidence into a Monday matchup on the road against the 2-5 Higley High School Knights.