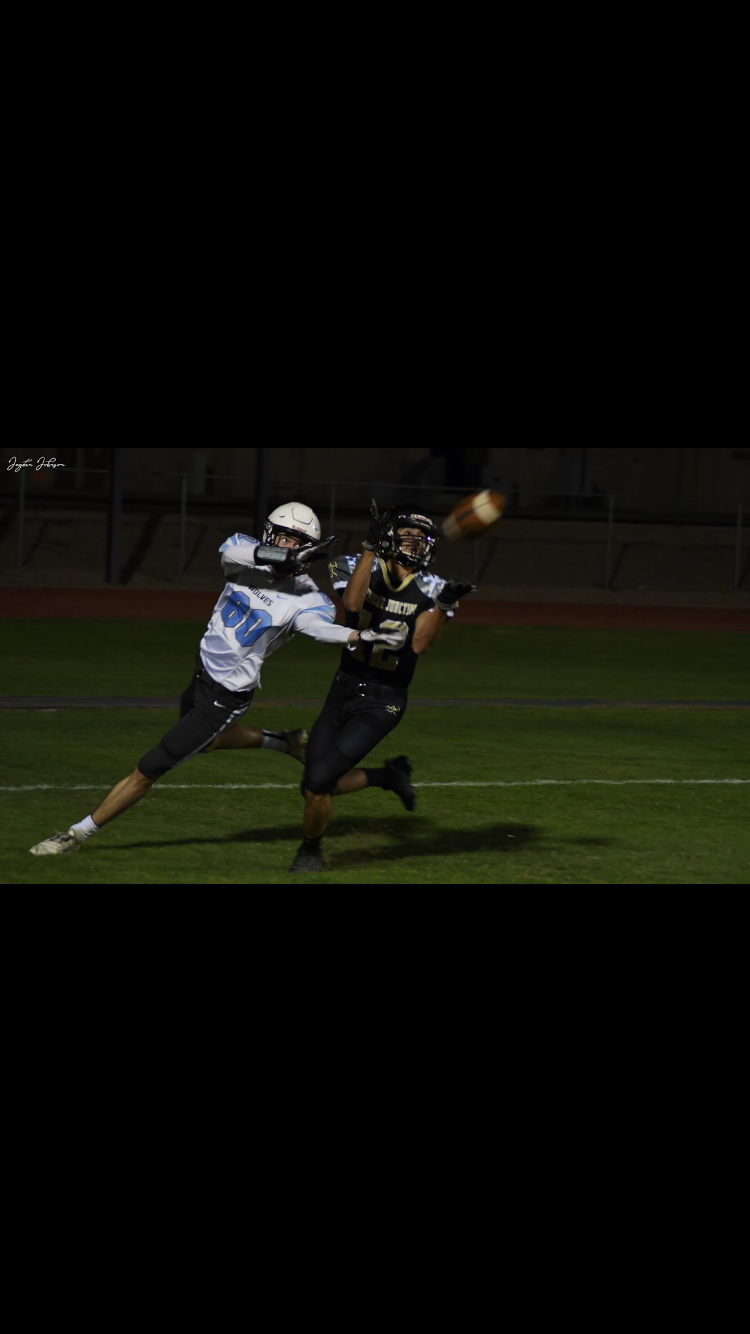 The Apache Junction Prospectors honored their seniors on and off the field in their win over the Estrella Foothills Wolves Friday night.

Before the game, seniors from the football team, golf team and cheer squad walked across the track to the sound of clapping and cheering from fans. Not only was it Apache Junction’s senior night, but also their home opener.

On the field, the Prospectors showcased an explosive performance from their offense and created havoc with their defense which led to an impressive 52-29 victory.

The Wolves jumped out to a fast start. After the Prospectors failed to convert on fourth down in Wolves’ territory, the Wolves marched down the field with ease. Senior quarterback Ty Perry struck his receiver in the corner of the end zone while rolling away from pressure.

However, that touchdown would be the only one for Estrella Foothills in the first half. The Prospectors put constant pressure on Perry, who came into the game leading his team in passing and rushing yards. Perry threw two interceptions on back-to-back drives, one of them in the end zone.

Apache Junction senior linebacker Brody Bullard, or “Rowdy” Brody Bullard according to the announcer, harassed Perry in the backfield on multiple occasions. He finished the game with a sack and a couple of tackles for losses.

“He’s a good quarterback … but our game plan was [to] pretty much just shut him down and then we will win the game,” Bullard said in a post-game interview.

The Wolves’ offense also struggled to get wide receiver Daylan Batchan involved early. The leading receiver for the Wolves failed to catch the ball in the first half. However, Batchan erupted in the second half and finished the game with six receptions for 196 yards and two touchdowns.

Meanwhile, the Prospectors had no issue moving the ball on offense. Apache Junction scored 33 unanswered points after the Wolves’ opening touchdown. Estrella Foothills looked to stop the bleeding at the end of the half by driving down to the Prospector 4-yard line, but a botched handoff led to a fumble recovery for Apache Junction.

With 49 seconds left in the first half and backed up on his 8-yard line, quarterback Gavin Limongello delivered a strike to Cameron Garcia who sprinted down the sideline for a 92-yard touchdown. Going 96 yards in 29 seconds capped off a first-half explosion for the Prospectors as they carried a 33-7 lead into halftime.

“Our offensive coordinator Dave Moser did a great job tonight… there were a lot of areas that we thought we could attack, and we did,” Apache Junction coach Bruce Binkley said about his offense’s performance.

The Wolves did not lay down for Apache Junction. Perry came out of halftime and completed six of his first eight passes, including a 68-yard touchdown pass to Batchan. The Wolves scored two quick touchdowns to make the score 33-21 halfway through the third quarter.

“The offensive line blocked great. I think the receivers stayed on their blocks for as long as they could, which opens up holes for me to make touchdowns,” Savoie said.

Savoie finished the game with 13 carries for 126 yards and three touchdowns.

After suffering a 46-21 loss to the defending 4A champions Mesquite in the season opener, the Prospectors have rattled off two straight victories. The team continues to gain confidence with each passing week.

“I feel like our team is way better than week one,” Bullard said.

“Our team just performed, I think, the best we ever have,” Limongello said.

Estrella Foothills falls to 1-2 with Friday night’s loss. They will face the undefeated Northwest Christian Crusaders in a non-conference game next Friday.

The Prospectors hope to continue their stream of momentum into conference play. They will also face an undefeated team, Poston Butte, who have outscored opponents 158-35 in three games this season.