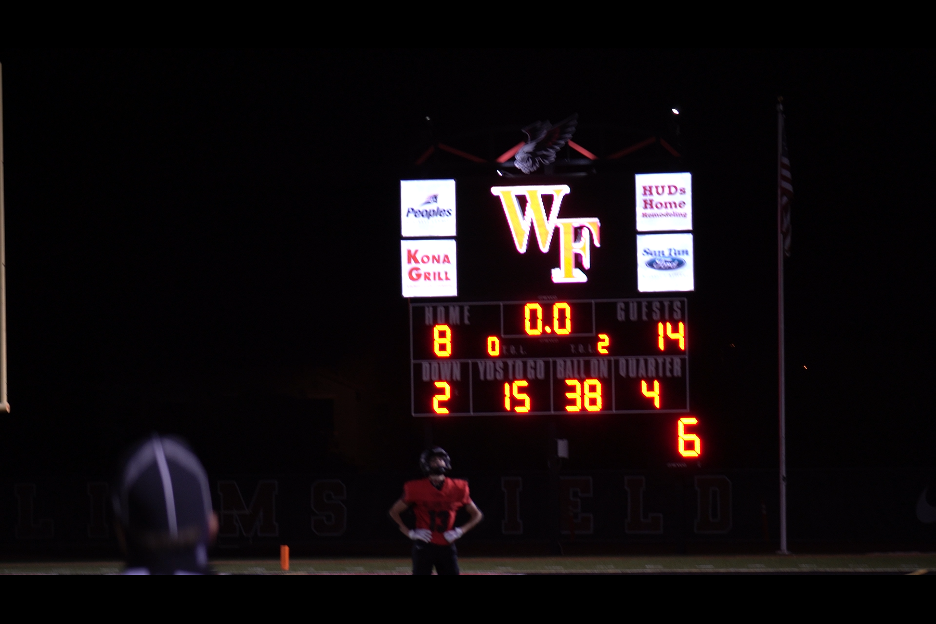 A goal-line stand is rare in the game of football. Trying to stop your opponent from getting just one yard, sometimes inches, when the human body is on average five-plus feet long, seems so futile. It seems so simple, just fall forward, and the touchdown is yours. But two goal line stands, that’s nearly impossible.

The Centennial Coyotes held the line twice Friday night against the defending state champ Blackhawks from Williams Field. The Coyotes took an early 7-0 lead in the first quarter, with a long, 40-plus-yard run by running back James Scott.

Later in the second quarter, following a great punt by the Williams Field kicker Kaden Loshonkohl that was downed at the 1-yard line, Centennial drove the ball 99 yards. The Coyotes punched in a play-action rollout pass from QB Joshua Gasca to 6’4 tight end DJ Gleash. That made the lead 14-0 with a minute to go before half.

Centennial's second touchdown seemingly sealed the low-energy first half for the Blackhawks. On their final possession, they frantically pushed the ball down the field, trying to squeeze some kind of points out before the half. A pass interference call, followed by a great throw by quarterback CJ Tiller and sideline catch by Blackhawks WR Myles Taylor, found themselves at the one-yard line, with .9 seconds to go.

The last play before half.

The Blackhawks were not even thinking about a field goal, as the offense lined up for the final play. A quick pass to a slant route was broken up by Centennial defensive back Devin Sanchez. This was the first goal-line stand.

The third quarter consisted of both teams going back and forth, stopping the other, and punting.

The Williams Field offense sparked back up at the beginning of the 4th quarter, with another great hookup from Tiller to Taylor. Tiller was battling a leg injury all game, exiting the contest multiple times. The following play, the Blackhawks got on the scoreboard with a 15-yard screen pass to running back Lasjawn Hunter. The ensuing PAT was missed, making the score 14-6 in Centennial's favor with 10:24 to go.

The Coyotes looked to put the game away on the next possession, and the Blackhawks were looking for some kind of play that could get them back into the game. Williams Field would get that very play, after Centennial completed two straight passes, and threw a third pass, a short drag route that was caught. As Coyote wide receiver Seth Jelovic came across the field, he was met by Blackhawks senior outside linebacker Taber Thomas, who jarred the ball loose. The fumble was recovered by teammate Rhett Wengert who set Williams Field up on the opposing side of the field.

With the clock ticking down, Williams Field converted a 4th-and-inches to put them inside the 10-yard line with a minute to go. Just as they had been at the end of the first half, the Blackhawks were staring at the endzone, itching for a score. On a play former New England Patriot defensive back Malcolm Butler would be proud of, a quick pass to an out route, Centennial's Rashon Adams picked off a pass intended for wide receiver Kyler Kasper. Their second goal line stand.

After going three and out at their own goal line, Centennial elected to take a safety to burn clock, with 30 seconds to go. With the score 8-14, one last shot for the Blackhawks, Tiller was again injured on a sack, leaving backup QB Davin Switzer to come in on the last play. The Centennial defense would hold again, as a sack would end this wild game.