COVID-19? Not going down to the Saints 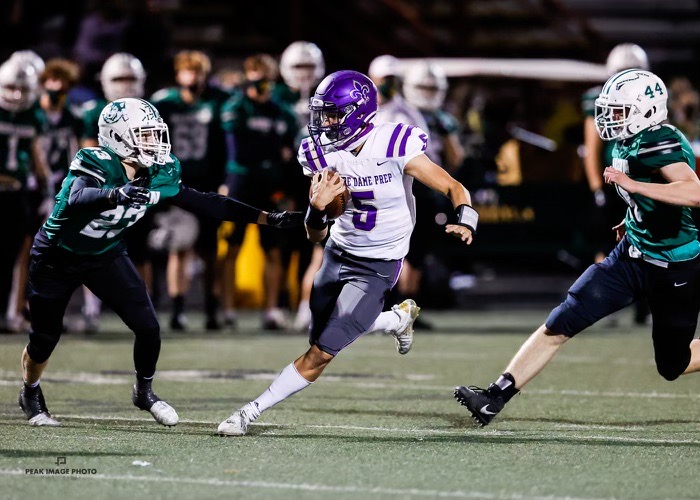 SCOTTSDALE -- Tension filled the air in the game between the Notre Dame Prep Saints and the Horizon High School Huskies on Friday night.

Between coaches screaming so loud on Horizon's home field that they could be heard the next block over, to multiple scuffles on the field, to both squads being energized all game on the sidelines, this final regular season game between two 3-2 teams was a classic.

Notre Dame Prep had a Covid-19 outbreak that caused the team to miss its last two games. The Saints were prepared to finish their season strong against the Huskies. The Huskies were coming off a 24-0 loss to one of the best teams in Arizona, the Saguaro Sabercats. Both teams had something to prove, and it showed early on.

The two teams were locked in a defensive battle early. The Huskies made a bold move on their very first touchdown to go for the two-point conversion, and it paid off. The Saints were unable to score in the first quarter after the defensive lockdown by Horizon. Saints head coach George Prelock attributed the early struggles to "mental errors," which were potentially caused by the two-week layoff.

As each of these "mental errors" started to build up, coaches on the sideline for the Saints started howling towards the players to get their heads back into the game. However, the Saints weren't the only ones howling. The Huskies' head coach was repeatedly screaming at the referees, as well as yelling "get your head in the game" many times to seemingly anyone willing to listen.

The tension from the coaches then spread to the players, as it became evident that this game meant a lot to both sides. That increased tension led to more emotion flowing on the field with every play. Huskies player Daniel Santiago got into the face of one of the Saints players and had to be pulled away by his teammates. It wasn't the last time that a Huskies player had to be pulled away, as later during the game a Horizon player was seen on top of a Saints player, seemingly reluctant to let him off the ground.

As the game rolled along, the Saints crowd felt the game within reach the entire time. Even though the Huskies defense had shut down the Saints until late in the second quarter, the Notre Dame Prep fans were making the bleachers shake by stomping their feet to rile up their team.

As per usual, Saints quarterback Tyler Schweigert was right in the middle of things. The Saints opted to use their junior quarterback Braden Wells in the first quarter, but the Wells offense was oftentimes shut down very early by the Huskies. When Schweigert entered the game, so did the Saints. He has been often known for his passing game, but as Schweigert himself says, he has a "tendency to try to force things."

There was a clear difference between this game and past in how Schweigert played the offense. A quarterback who loves to use his arm chose to run the ball half of the plays that took place. This allowed the Saints to push themselves back in after seeming just out all game. By taking a few yards here and a few yards there, the Saints were able to get close enough to where Schweigert could pass the ball comfortably.

The Saints drew closer entering halftime, as the score widdled down to 8-6, in favor of the Huskies.

However, the third quarter is when the Saints entered second gear. Schweigert tossed two touchdowns to put the Saints up 19-8. The Huskies followed up with a touchdown of their own and another two-point conversion to put Horizon's total to 16.

The fourth quarter came along with a three-point game, and possible postseason spots on the line. However, the close game didn't last much longer. The Saints pushed through with two touchdowns in the quarter, and the defense of Notre Dame Prep matched what the Huskies had put forward in the first half. One of Notre Dame Prep's defenders, Drake Lambrecht, believed that it would "boost the offense's morale" if the defense could keep up. Keep up they did, and the offense's morale clearly rose from there.

As the clock wound down to two minutes left in the fourth quarter, the Saints began to bleed the clock. The home fans at Horizon had silenced after a game of cheering. The Horizon PA announcer attempted to rile them up to no avail, and the Huskies had accepted their defeat.  Both teams gathered in the middle of the field with 25 seconds remaining to air-handshake.

The Saints offense was able to sneak by the great defense of the Huskies and were able to win by a score of 33-24 in the final game of the season. The Saints finished the season 4-2, and the Huskies fell to .500 with a final record of 3-3.

The postseason bracket has not yet been determined, but the Saints know that they have locked up a position. After the game, one of Notre Dame Prep's coaches made it clear to they players that people are counting them out, and that it is important to make sure to shut those doubters down.