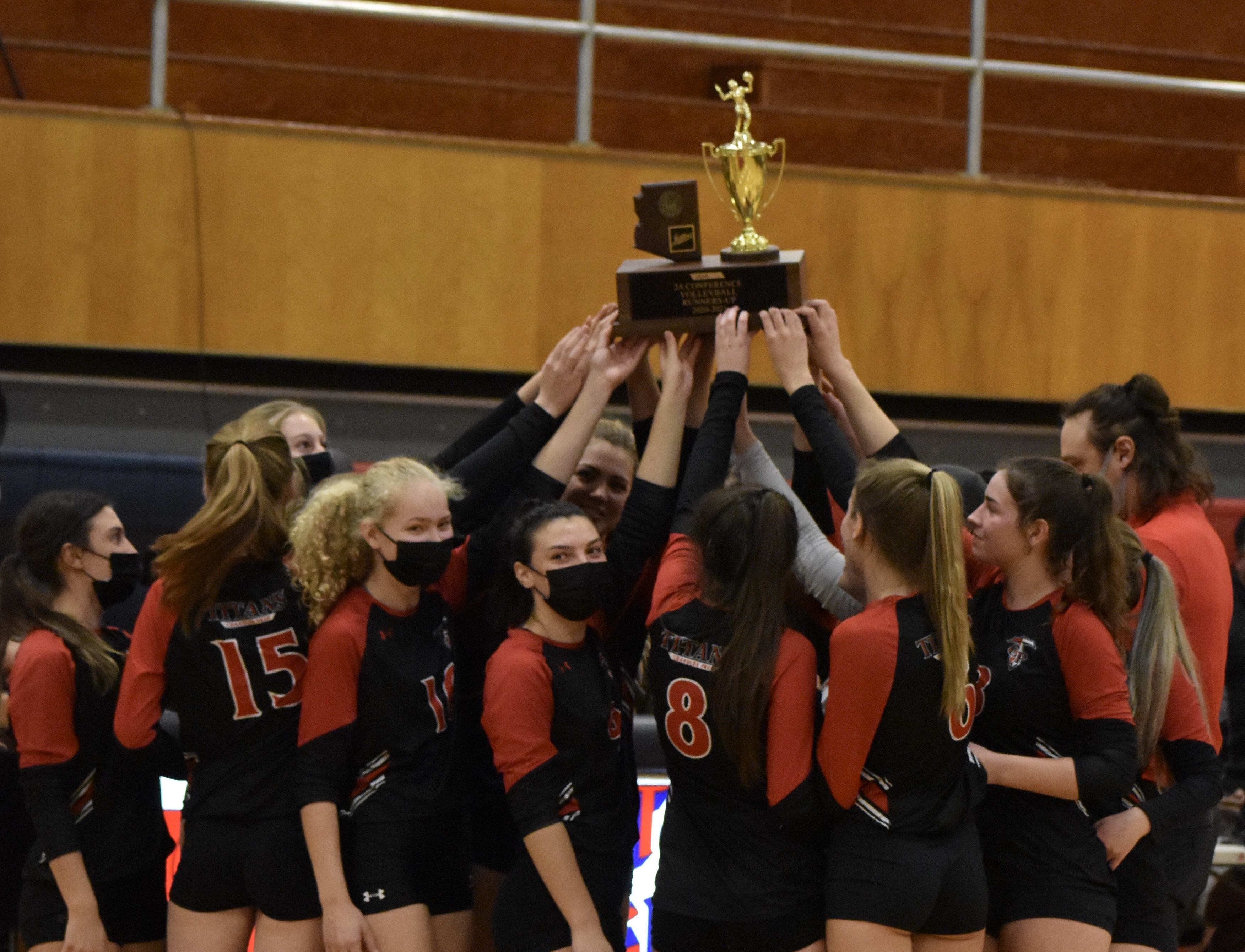 On Saturday, November 21, the Titans from Chandler Prep competed in the final rounds of the volleyball state playoffs, finishing as the 2A runners up.

In the semi-finals, the #4 seed Titans faced the #1 seed Crimson Knights from Trivium Prep, a team that they lost to in five games during the regular season. Chandler Prep showed their power at the net, with contributions by many players. Namely in the first set, sophomore Zoe Yates and senior Ellie Unruh led up front, each with three kills. Both teams started out meticulously with very few errors from either side of the court. The Crimson Knights put up a fight on Chandler Prep’s game point, but ultimately fell short, the Titans taking the first set 26-24.

The Titans served very well in the second set with seven aces to Trivium’s two. Senior libero Cassi Bronson led the team in aces with four, three of them consecutively. Senior outside hitter Olivia Cadien racked up five kills in the set, all virtually unhittable. The Titans took the match lead at 2-0 with a second set victory of 25-18.

The Titans fell short in set three, despite Bronson’s efforts to keep the ball alive on many occasions. The Crimson Knights served six aces and were a force to be reckoned with at the net, winning the set 25-13. The Titans regained their energy six points into the fourth set behind an eight-point service run by Cadien with four aces. Senior setter Holly Gialketsis landed two setter dumps against Trivium Prep in the set and the Titans played an incredible blocking game. The Titans upset the #1 seed Crimson Knights 3-1 with a final set score of 25-21. Head Coach Jones, 2A Valley Coach of the year, was concerned about the mental aspect of beating Trivium Prep going into the match. He said this about their ability to overcome that:

“After the third set, where we got rocked, I think the girls really did a great job mentally just saying ‘Hey, we can do this. We know we can do this. We just need to play well.’ Then in that fourth set, they started playing really well and started believing. It’s that belief they need to have, and they had that continuing through the whole match after that set.”

The Chandler Prep Titans faced the #2 seed Scottsdale Christian Eagles later Saturday afternoon and struggled against the consistent attacks at the net, ultimately unable to come back all the way in each set.

The Titans trailed throughout the first set, taking the lead only once near the begging of the set. On the Eagles game point, the Titans trailed five points with the Eagles serving. Senior Ellie Unruh got the side out for Chandler Prep with a kill and freshman designated server Juliet Mason was up to serve. The Titans almost came back behind her strong serving arm, but Scottsdale Prep scored the final kill beating the Titans 25-23.

Chandler Prep struggled to retain the serve in the final two sets, but Bronson and Gialketsis fought well to keep the ball alive against the Eagles offensive. At the net, seniors Evi Yates and Unruh led the Titans in kills with ten and nine respectively.

The Eagles won the second and third set each by a score of 25-17, claiming the state championship victory, the Titans finishing as runners up. Team Captain Cadien reflected on the best moments of the season after clinching the title:

“Definitely the semi-finals. That was really good, especially because we lost to them in the actual season. We came back and we fought really hard and we beat them. When we went to Tucson, that was just a fun trip. We really bonded. Just coming together and the fact that we’re going through COVID together, we really fought for this hard season, so it was a really great way to finish off senior year.”

The Titans graduate six seniors this year and will return next year with another championship-caliber team. Titan Up.