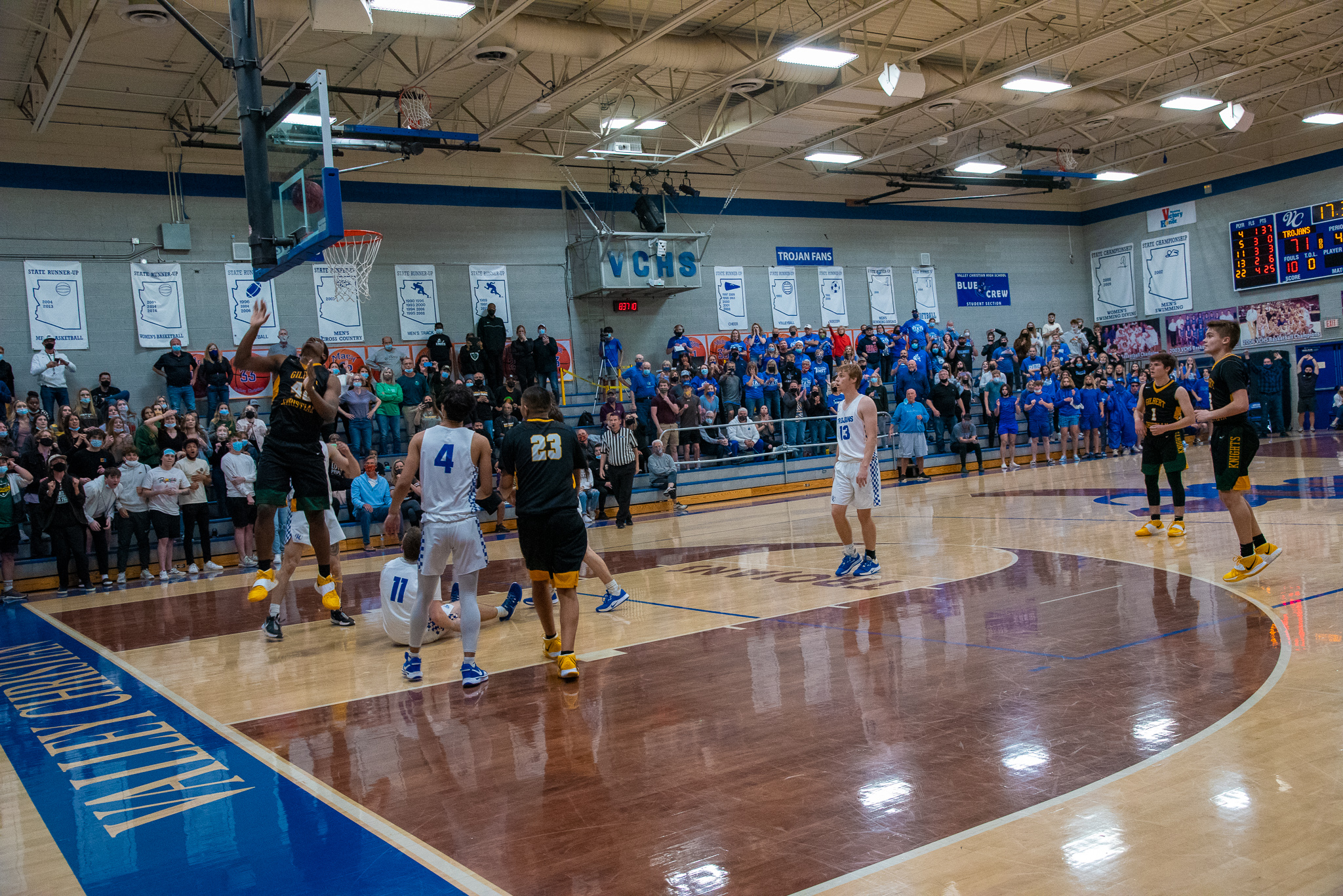 Laura Fellows is the media advisor for Gilbert Christian's Student SID program that contributes content on behalf of the school to AZPreps365.com

Kurt Keener and Jason Pasquariello contributed content to this article.

The Gilbert Christian Knights Men’s Basketball Team was ALL-in, ALL-Spirit, and ALL-Game when they took on the Valley Christian Trojans in the quarter-finals of the Division 3A High School Basketball play offs on Saturday, March 13th, on the Trojan’s home court. The teams appeared to be evenly matched as the score jumped back and forth all four quarters with each team taking the lead at any given time. However, when it was most crucial, the Knights pulled out the win with a game winning basket by sophomore, Albert Wilson III, with only seven seconds remaining leaving a final score, Knights 72, Trojans 71.

Coach Keener added, “It was an amazing game last night.”

According to the coaches, both teams fed off the energy of their high-spirited fans. In the end, it came down to the fire power of the Trojan’s big two, Jaden DeBoer and Jacob Rice. DeBoer had 37 points and Rice had 25 points, of which 22 and 25 were in the second quarter alone, respectively; versus the team depth of the Knights for the night.

The Knight’s played ten young men and nine of them got into the scoring column. Junior, Brad Rowland, led the way with 17 points and seven rebounds. Despite foul trouble that caused him to see limited time in the second half, Albert Wilson III, including the aforementioned game winner, had 16 points and eight rebounds. Freshman, Keon Talgo, added 12 points and made six out of six free throws in the second half.

The Knight’s bench, led by Keon Talgo, Caden Heyn (JR), Kerrigan Lloyd (SR), Michael Gross (SO), and Nigel Stanbury (SR), outscored the Trojan bench, 26 – 0. The game was so intense and animated on both sides, that Coach Keener’s voice went out, like a light switch turned off, halfway through the first quarter. Unable to communicate in more than a soft whisper, assistant coach, Jason Pasquariello, took over and did an awesome job leading the team.

Credit goes to the young men who believed in the game plan and never got down despite an adverse atmosphere and great play from the previously undefeated Trojan squad. At times, things might have appeared to be shaky, but the Knights belief did not waiver! Brad Rowland was huge offensively. The team exhibited patience and execution to get Albert Wilson III a good look at the end of the game. His post-finish shows how far the Knight’s team has come this year.

Senior captains, Ayden Hoyt and Karsten Gargan, provided the on court leadership that insured the Knights never stopped believing they could prevail. Assistant Coach Pasquariello added, “Our fans and students who came out were amazing and helped energize our guys!”

The Gilbert Christian Knights will take on the Page Sand Devils next in the semi-finals on Thursday, March 18th , 7:00 PM, at Page High School in Page, Arizona. Go Knights! 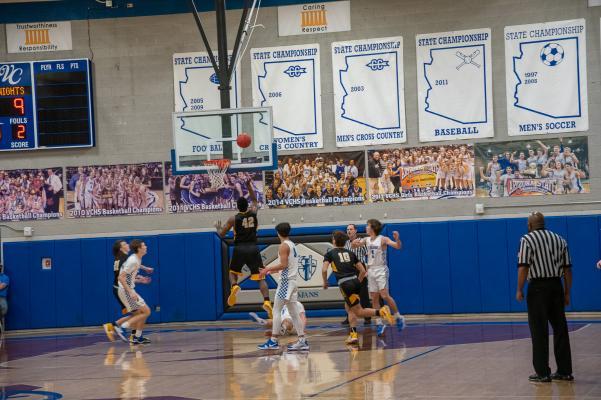 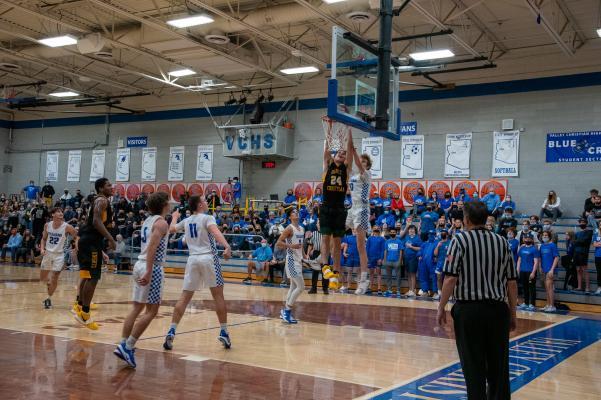 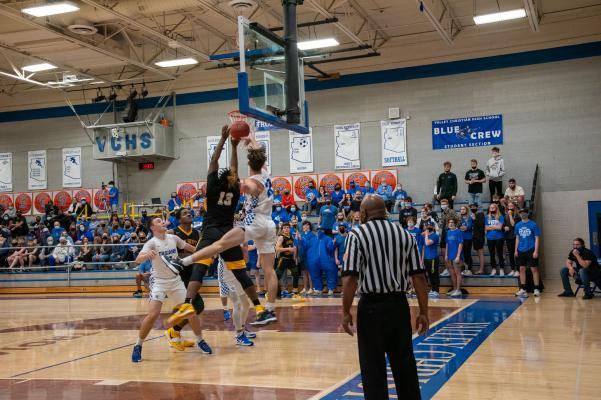 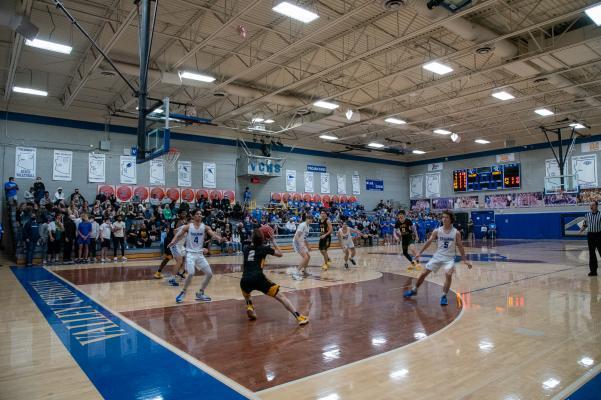 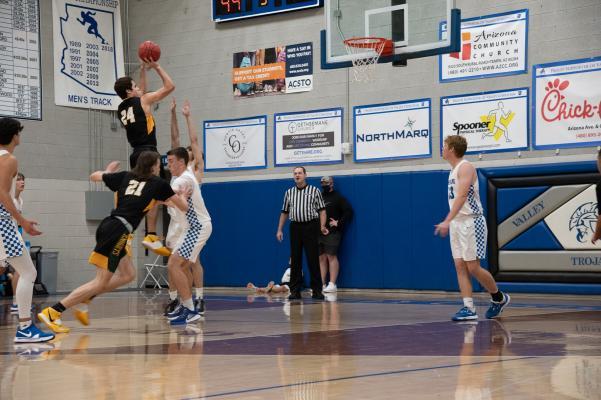 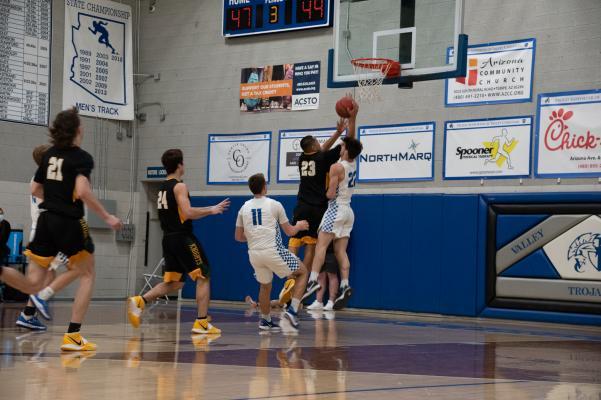 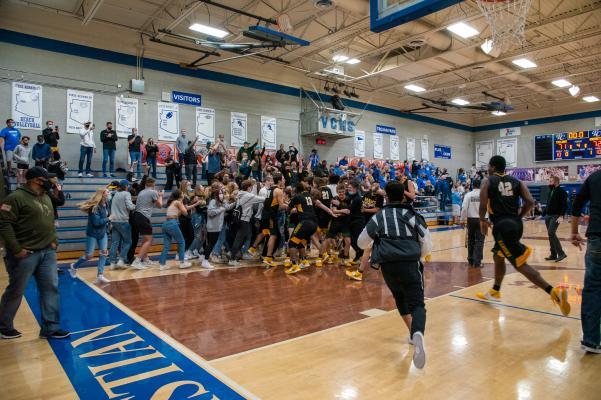