Brophy is first 6A team to three-peat 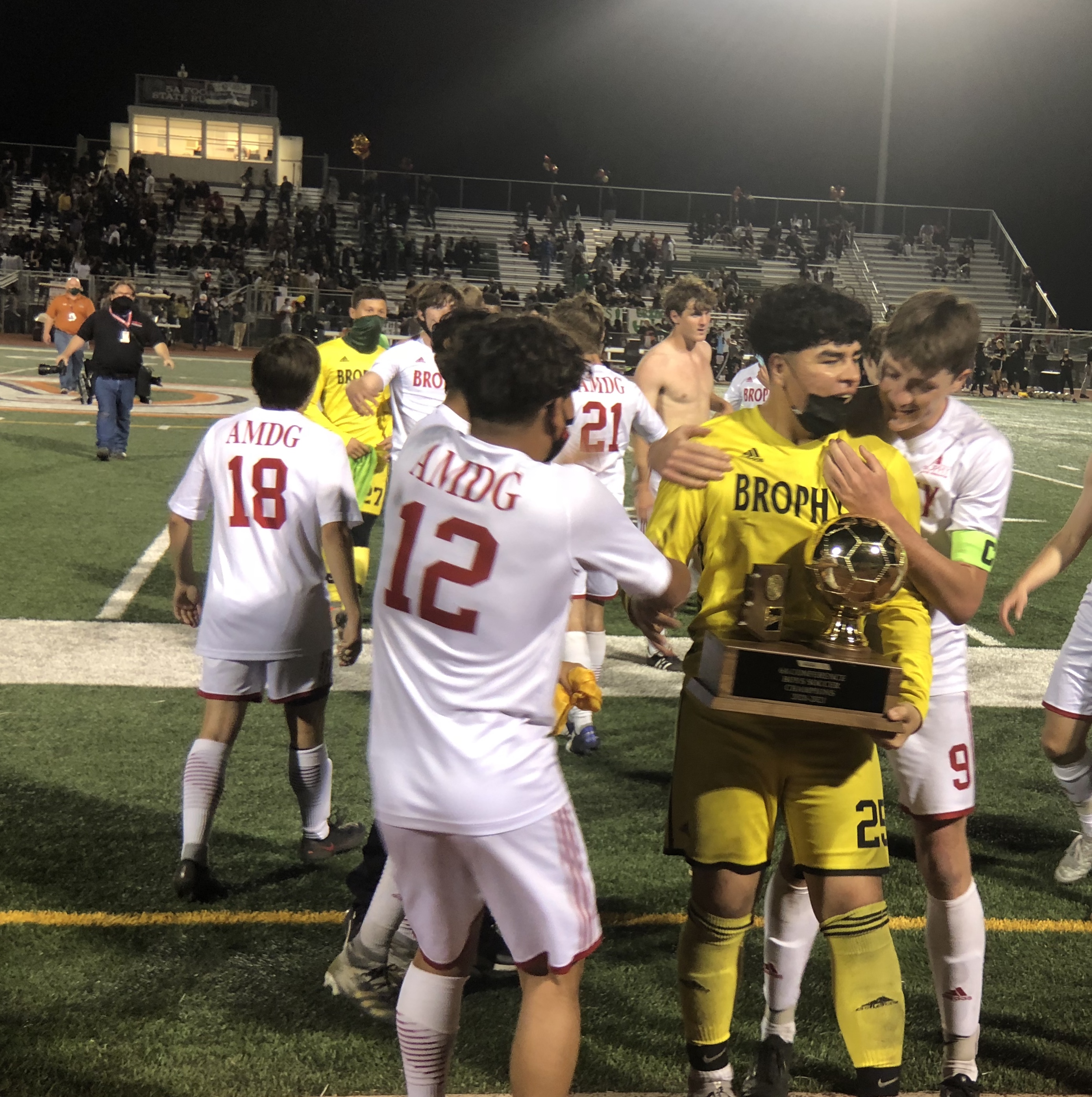 Brophy goalkeeper Bryan Figueroa is congratulated after his championship-saving performance in Friday's shoot-out in the 6A Conference title game. Photo by Jose Garcia/azpreps365.com

The Broncos found themselves in the same situation as last year, down 1-0 Friday night at halftime in its biggest game of the year. But just like last year, Brophy responded in extraordinary fashion.

In the second half, captain Charlie Cobb uncorked one of 6A’s all-time best championship goals, and goalkeeper Bryan Figueroa added the final touches, executing three blocks in a shoot-out to secure Brophy’s place in history and victory at Campo Verde High School. After the 3-2 shoot-out result over San Luis, Brophy became the first 6A Conference boys soccer team to three-peat.

Figueroa blocked San Luis’ first, fourth and final penalty shoot-out attempts and was then mobbed by his teammates and classmates in the area he owned in the final nail-biting minutes.

Bryan Figueroa blocked 3 PKs in the shootout. In his final game for ⁦@brophy_soccer⁩, he exits as the hero for the 3-time defending 6A champ. 3-2 in PKs. 1-1 in regulation. Final save and celebration: pic.twitter.com/K3rXPMBFMp

“I actually read most of the (San Luis’) players,” Figueroa said. “The ones that got me were the ones that did a little (hesitation) stop before (they shot), and that usually messes me up.

“It feels great. Brophy has a lot of meaning, and I’m just glad to be a part of this program.”

San Luis’ first half formation was correct but miscalculated in the second half in its third attempt to finally bring home 6A’s grand prize.

The program southwest of Yuma possessed the ball in the middle third more, frustrating Brophy (two first half yellow cards) at times. That led to San Luis’ only goal-scoring play in regulation, which started with a long free kick and ended with Erick Quirarte sticking out his right leg to volley it in.

⁦@BoysSidewinders⁩ up 1-0 vs. ⁦@brophy_soccer⁩ in the 6A ⚽️ final @ Campo Verde. Goal by Erick Quirarte in the 22’. Halftime. pic.twitter.com/xtxkFcrjnl

Roberto Uribe received the free kick near the goal line and then headed the ball in Quirarte’s direction in the 22nd minute. But in the first half, Cobb gave fans a glimpse of what was to come.

The senior had success on the left flank, setting up Brophy’s most dangerous scoring opportunities. Tactically, Brophy didn’t change much at halftime.

“The biggest thing I told them was to settle down and play soccer,” Brophy coach Paul Allen said. “We were frantic a little bit in the first half. Once we started knocking it around I knew a goal would come. It was just a matter of when.”

Right winger Chase Jackson, a sophomore, was one of the players who stepped up in the second half in the attacking third for Brophy. Defender Ian Hagan’s speed was also a factor.

Jackson’s cross in the 54th minute set up an excellent opportunity, but the shot by Brophy sailed high. But meanwhile, on the left, Cobb kept prowling until he netted a trophy shot.

The Gatorade Player of the Year candidate dribbled into open space and blasted a right-footed shot to the upper far right corner of the net for the 9-time state champion.

“Man, my teammates were working so hard the entire game, it’s the least I can do,” said Cobb about his shot heard around Brophy’s world and beyond in the 64th minute. “They gave me the ball so many times, and I knew one was going to go into the back of the net. I just cut in. I was feeling it. Saw it hit the back of the net. It was the best feeling in the world.

“Respect to San Luis. They had a heck of a season, but tonight was our night.”

Probably the goal of the 6A tournament. It came off the right foot of Brophy captain Charlie Cobb, outside the box, upper right corner to tie it at 1-1 with 15:17 left. Heading to OT. pic.twitter.com/uA3llSyOYv