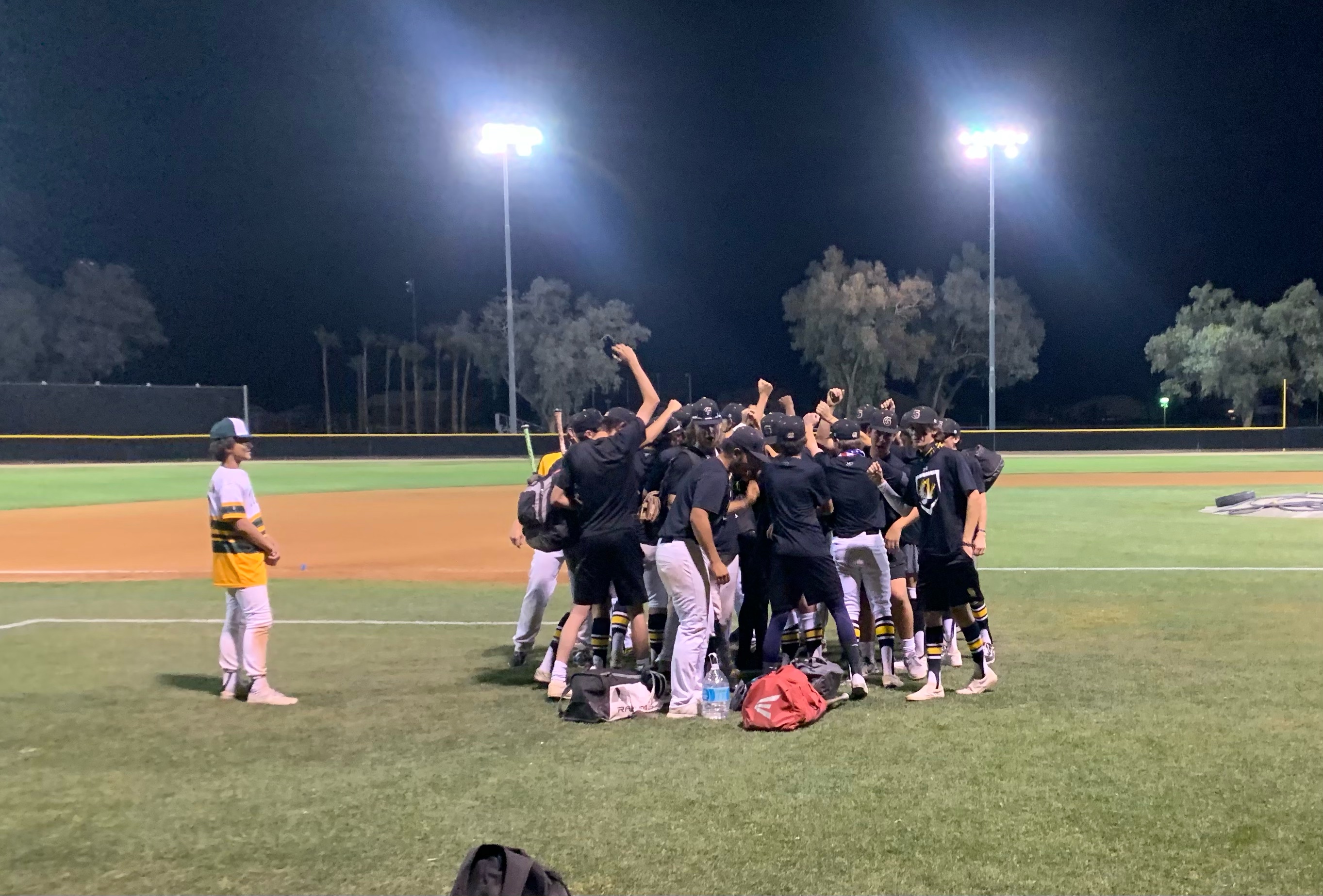 The Gilbert Tigers gather as a team to celebrate after their win over Desert Mountain on Wednesday night. (Shawn DePaz photo/AZPreps365)

The Gilbert baseball team was nearly perfect in every facet of their game Wednesday night when they hosted Desert Mountain. It took the Tigers only five innings to defeat the Wolves 13-3, invoking the 10-run mercy rule.

The star of the game for the Tigers (5-4) was starting pitcher Isaiah Maes. The junior pitched all five innings, limiting Desert Mountain (8-2) to only three runs and five hits.

Maes rebounded nicely after allowing a run in the first inning. Desert Mountain's other two runs he allowed came off a two-run homer in the third inning by the Wolves’ starting pitcher, Luke Moeller.

“He just kept doing what he needed to do,” Gutierrez said. “I thought he showed the other pitchers on our staff, ‘this is how you pitch, this is how you react, this is the body language you should have if you want to be good.’”

Maes said that his preparedness is what allowed him to be successful.

“I went through their stats and I read their hitters and I knew what to throw,” Maes said. “So, I just felt confident the whole game throwing against them. “

Maes received a boost from Gilbert’s offense, which wasted no time getting work. After the Tigers' first two batters of the game reached base, senior Jay Evans hit a three-run home run to left field to give Gilbert a 3-1 lead.

Maes expressed his appreciation for the cushion that his offense provided.

“It was amazing,” Maes said. “I was on a cloud pitching up there, so it felt good.”

Junior Drew Goodman and senior Zach Feeder each had two-run singles in what was ultimately a six-run third inning for the Tigers. Gilbert baserunners consistently managed to move themselves into scoring position, combining for four stolen bases in the inning.

The Gilbert defense also had a number of spectacular plays that prevented the Wolves from gaining any momentum. One such instance came in the top of the fourth inning when Tigers left fielder Jaxon Wilcoxson made two catches to end the inning, including a diving catch to rob Desert Mountain of an extra-base hit.

Desert Mountain coach Ryan Dyer acknowledged that his team was fatigued due to their recent run of games. The Wolves have played five times in the last 10 days.

Many, including Gutierrez, consider the Wolves to be one of the best teams in Arizona, giving this dominant win added significance for the Tigers. He said that this sort of win can be big for his team’s confidence.

“You gotta have confidence to begin with,” Gutierrez said, “but you just kind of prove to yourself that you can play with anybody.