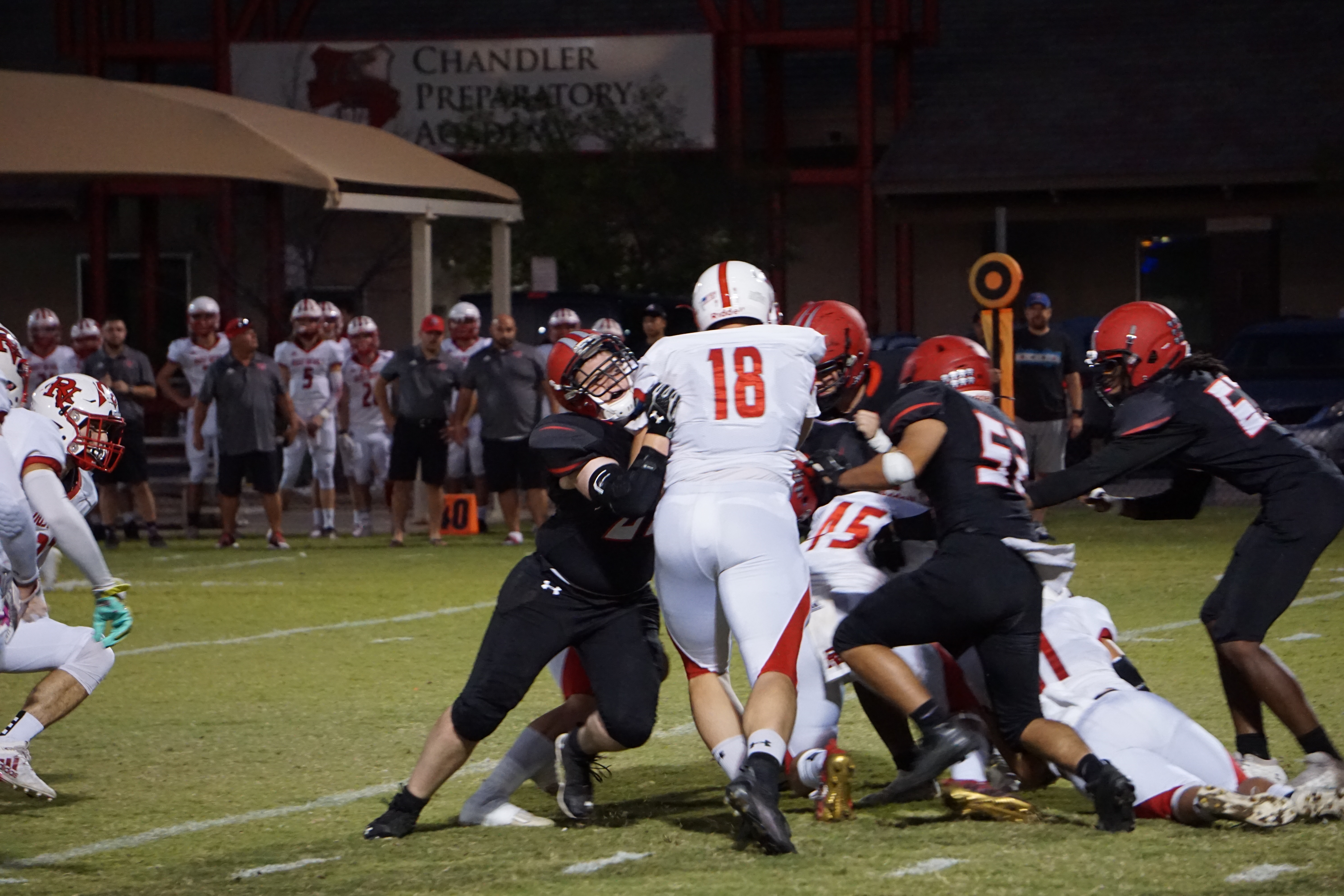 The Titans were outmatched on the defensive and offensive lines (Joy Brown/AZPreps365).

On Saturday, September 11th, the Chandler Prep Titans hosted the River Valley Dust Devils and lost soundly 49-0. As the 2A conference underdogs, the Titans were frequently unable to combat the force of the defensive line and the power running plays from the top team in the 3A West region. Chandler Prep did, however, showcase perseverance and improvement throughout the game. After the rough loss, Head Coach Peake said this to his players:

“I’m proud of each and every one of you. I’m proud of your effort and how we played this game. That being said, remember how this feels; remember what this looks like. It’s a tough pill to swallow, but remember it. Channel this and use it as motivation for the next time. We’ve got time to get ready for our next game, so channel this and we’ll get back to work next week.”

The Dust Devils scored 35 points against the Titans in the first half. After scoring their first touchdown with four minutes left in the first quarter, River Valley quickly got the ball back and converted on third down from the 13-yard line for their second score.

Chandler Prep had to rely more on team tackles as they often lost the one-on-one matchup with senior running back for the Dust Devils Zach Hammet, and the half ended with a River Valley 69-yard rushing touchdown. Defensively, River Valley played tough, often tackling aggressively one-on-one and the Titans had to move quickly to avoid tackles for loss. Titan quarterback, junior Nolan Kemper, was only sacked once on Saturday. Titan center, senior Ben Nelson, said this about the physicality of the game:

“It was a tough game. They hit hard and we had to hit back and we definitely didn’t take it that great in the first half. I don’t think we responded that great in that first half, but we came out in the second half and really tried to shut them down—didn’t let them get above 50. That’s what Coach Peake’s goal was.”

Offensively and defensively, the Titans were able to showcase themselves on passing plays. Shortly into the first quarter, senior slot receiver Noah LoBue was the first to move the chains with an 18-yard reception. Earlier, senior Sebastian Pastrana snatched an interception at the 50 and in the second half, senior Grant Peake would do the same, but this time in the end zone for a touchback. In the Titans running game, junior running back Sterling Harris had only 24 rushing yards.

After a fantastic punt by senior Sam Davis which put the Dust Devils at their 11-yard line, the final minutes of the game was a flurry of fumbles, recoveries, and a crushing interception. Sophomore tackle, Owen Anderson recovered the first fumble for the Titans setting up first and goal. After a Dust Devil interception, Ben Nelson recovered River Valley’s second fumble putting the Titans just outside the red zone. A Titan fumble allowed the Dust Devils to run out the rest of the clock. Despite Chandler Prep holding River Valley to only two touchdowns in the second half, the final score was still hard to swallow.

In recognition of the 9/11 anniversary, the Chandler Prep Football program donated $1,000 to the Chandler Fire Department to thank them for their service. The Titans play their next home game against the San Carlos Braves on Friday, September 17th at 7:00pm. Titan Up.