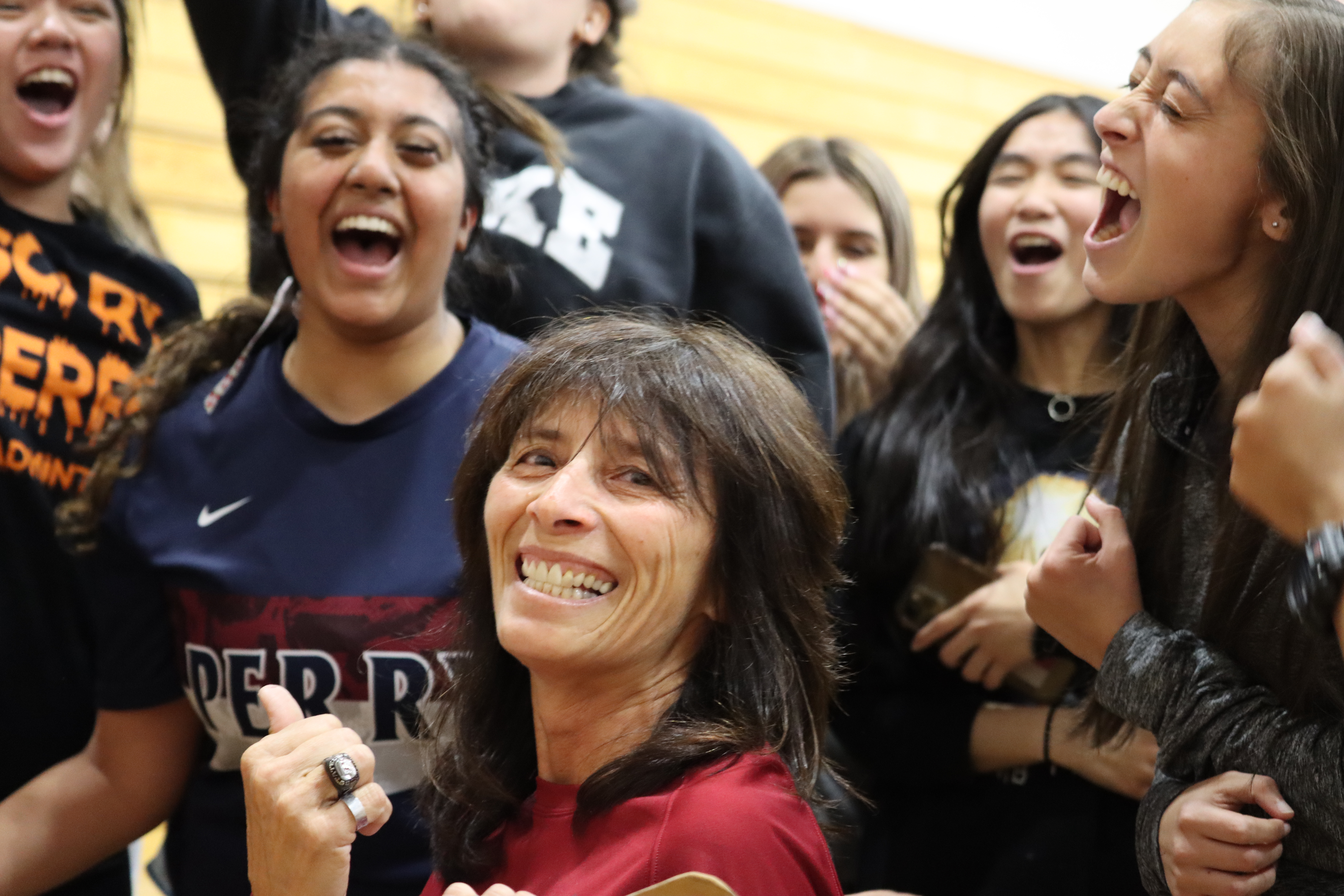 Perry coach Lerina Johnson and her team are all smiles after becoming the first program to win five consecutive badminton championships. Photo by Jose Garcia/azpreps365.com

Perry avenged its first Division I team loss in the past five seasons.

Ironwood proved that it was the No. 1 team in Division II despite being seeded No. 3.

For their efforts, they were rewarded the 2021 fall season badminton team champioship trophies at Cortez High School in Phoenix. Chaparral, the No. 1 seed in the Division I tourney, shocked Perry in the regular season when it snapped the Pumas' 81 match win streak.

But the most important streak remained intact after Perry swept Chaparral 5-0 Thursday night to become the first badminton program to five-peat.

"It doesn't get old," Perry coach Lerina Johnson said. "It's addicting to do this."

Ironwood also is getting used to winning.

Last year it won its first crown as the favorite. This year, Ironwood defeated a Prescott team that was seeded No. 1 and was 14-0 heading into Thursday's D-II finale.

Ironwood's No. 3 singles player and No. 2 doubles team each rallied from a set down to help their program repeat as champ.

"It was nerve-wracking for me," Ironwood coach Brett Stafford said. "I knew we had our hands full." 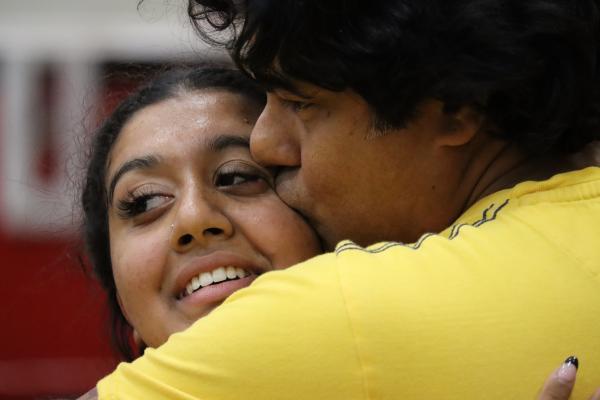 Perry's No. 1 singles player Nikhita Jayaraj got a hug and a kiss from her dad, Shammi, a Perry assistant, after her team clinched the D-I title. In her four years on varsity, Jayaraj won four team crowns and three doubles titles. "It's sad," Jayaraj said. "It's my last high school game. I'm never going to get to play again, but I won with an amazing team that's always had my back and supports me. That goes for my coaches, my dad, my family and my friends as well. So I'm glad that I have them by my side for the last one."  Photo by Jose Garcia/azpreps365.com. 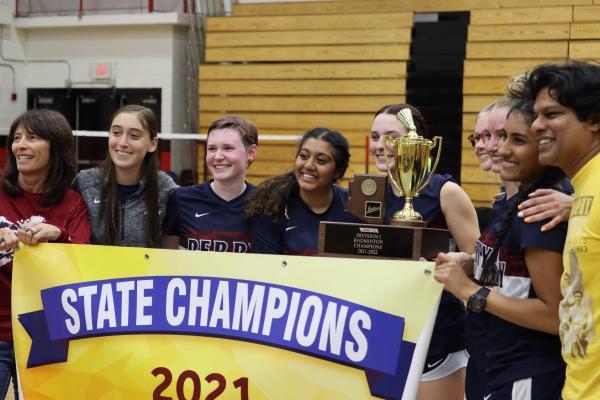 Perry is 82-1 over the past five seasons. "The streak was more of a thing for me," Perry coach Lerina Johnson said. "These girls were part of it. So I really didn't put pressure on them. I didn't stress that we had the record. I wanted them to play for themselves and for each other. After that loss (to Chaparral) I went to them and I let them know that it's a lot better that it happened during the season than when it really mattered most." Photo by Jose Garcia/azpreps365.com 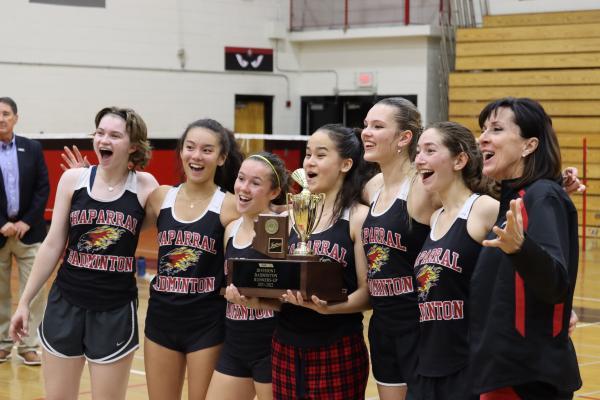 Chaparral reached its first team final since 2011. The is the fifth time that coach Carrie Davis (far right) has guided her program to the championship match. Photo by Jose Garcia/azpreps365.com. 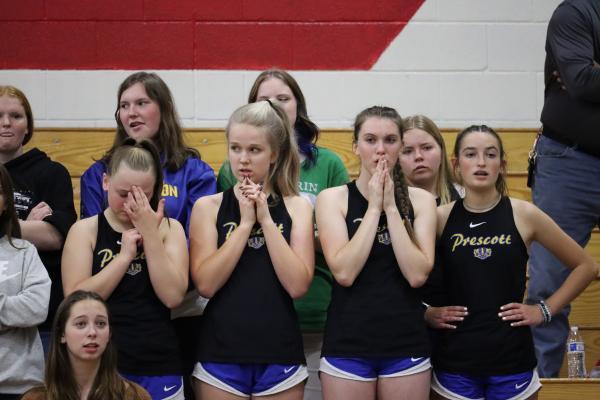 The Ironwood-Prescot D-II final was a nailbiter at Cortez High School. Some of Prescott's players joined their fans in the stands to watch the drama unfold. Photo by Jose Garcia/azpreps365.com. 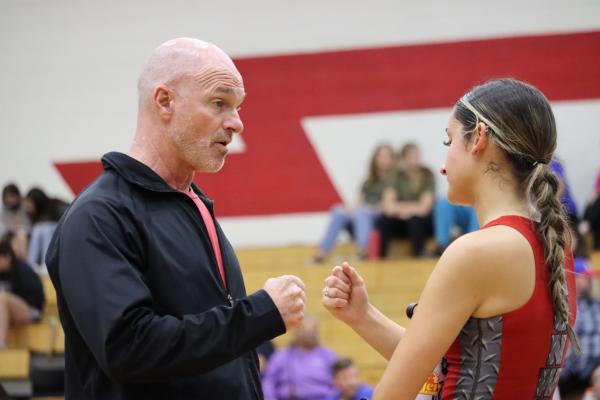 Ironwood coach Brett Stafford gave his No. 3 singles player, Juliana Traylor Rowen, a pep talk after she lost her first set. But she won the next two to give her team the momentum and a 4-2 lead heading into doubles play. Photo by Jose Garcia/azpreps365.com. 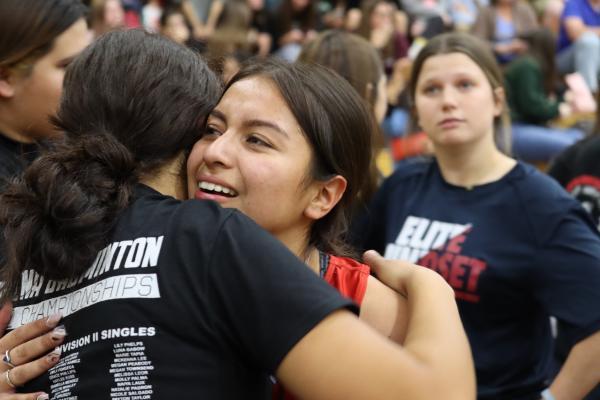 Diana Batrez-Ramirez (smiling) and her partner, Evelyn McHenry, clinched the title for Ironwood with their 2-1 victory. "We had to stay postiive," Batrez-Ramirez said. "We knew we were good and just had to stay positive the whole game. This feels so great." McHenry said, "After the first game I had a little doubt in myself, but I knew how much it meant to my team and my coach. They were all counting on me." Photo by Jose Garcia/azpreps365.com. 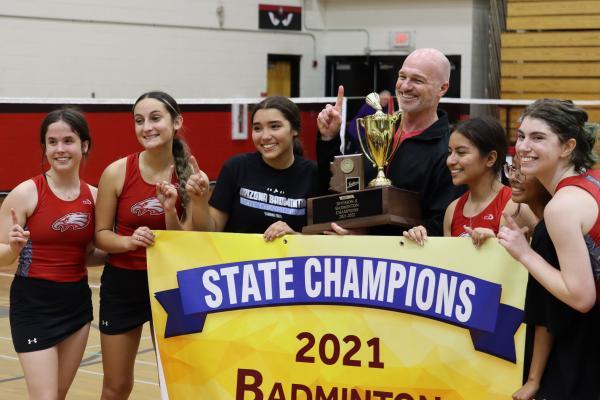 Ironwood finished this season with a 13-1 record after reaching its third final in the past four seasons. Photo by Jose Garcia/azpreps365.com. 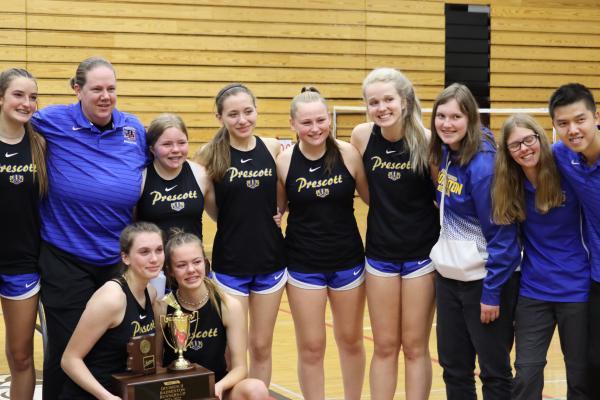 Prescott reached the championship round for the first time in program history. Photo by Jose Garcia/azpreps365.com.