Rollercoaster of a Gregory School soccer season comes to an end 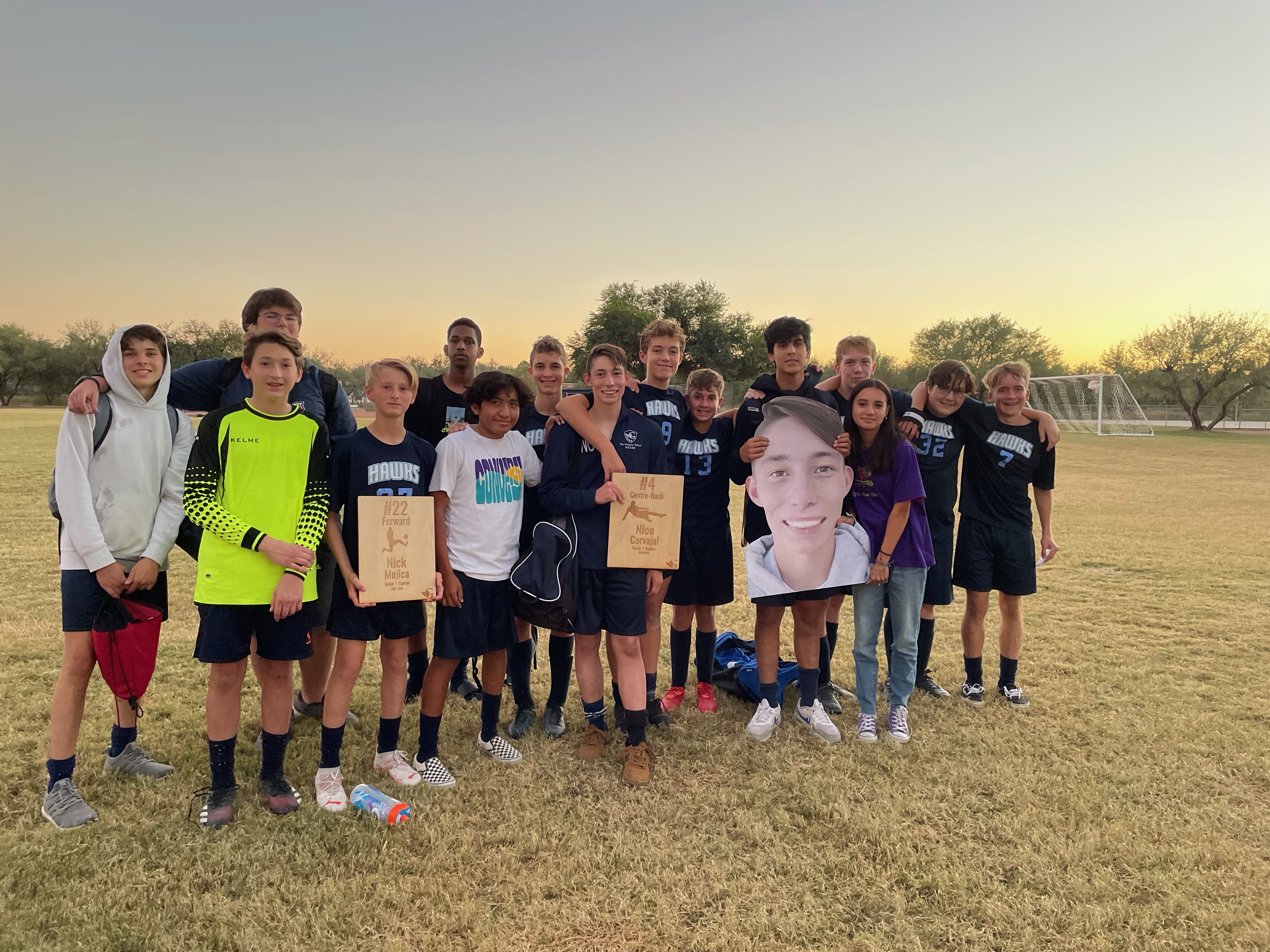 The Gregory School Hawks after a tough loss on senior night.

After a year away from soccer due to COVID-19, The Gregory School soccer team was finally back in action for this year’s fall season. Previously, the TGS Hawks had spent two years in the 3A winter league in order for their many club soccer players to participate. However last year they made the switch back to the 2A fall league to cater towards the growing number of athletes at the school that play both soccer and basketball. Unfortunately, that season was canceled in the midst of the pandemic, setting the 2021 season up for an entirely fresh start.

The 2021 Gregory School soccer team came together early in the fall with a lot in common. They were young, inexperienced, and eager to learn. This exciting new roster was filled with 17 players. Of those 17, just two were seniors and the entire rest of the team was underclassmen. Having had no season the previous year, none of the freshmen and sophomores had ever played high school soccer. But the theme of youthful inexperience does not end there, at 34 years old, it was Tim Milner’s first year as head coach of The Gregory School soccer team. Looking to start the season, this team knew how to do just one thing: play their hearts out.

In the first few games of the season, the Hawk’s lack of experience was apparent. They lost their first two games 3-0 to St. Augustine and 6-1 to Madison Highland Prep. In these games, the young team struggled to generate offense and maintain any possession. Then in their third game, they suffered their first heartbreak. It was a home game against the now 1-12-1 North Valley Christian. The Hawks had dominated the game, possessing the ball and attacking for almost the entire match. It was still just 1-1 after full time, sending the game into two more ten-minute halves. Near the end of the second half of overtime, TGS scored off a corner kick. Given that there were just a few minutes left, they thought they had won the game, and celebrated accordingly. Then as the young Hawk’s team giddily got back on defense, North Valley Christian sent a cross in and scored on the final play of the game, leaving The Gregory School players stunned. They ended the game with a massive total of 40 shots, but just two goals. While at the time it was a rough game for this new team, it taught them the importance of focus throughout the entire game.

After these lessons, the Hawk’s season took a turn for the better. They went on a three game winning streak, beating Rancho Solano Prep (2-1), Leading Edge Academy (6-0), and Benson (4-3). In these games. TGS started to possess the ball much better and finish more of their opportunities on goal. Then came their big test, an away game against their rival Desert Christian. This was a close competition, TGS scored first, but in the end they lost 2-1 in overtime. This loss set them back on their goal of making the state tournament, but they still had many games left to play.

Next, they beat Bisbee 4-2, and approached a game against Willcox, one of the best teams in the region. With their playoff hopes on the line, the Hawks came up short. They lost to Wilcox 4-1 and were almost certainly knocked out of contention to make the state tournament. However, this team still had a lot to play for, with their homecoming game against Patagonia right around the corner. In this game, TGS put on a show, beating Patagonia 5-1. After this, they had a rather one-sided 4-0 loss in their second time playing the third-ranked team in the state; Madison Highland Prep.

The Gregory School’s final game was against Benson. A team they had previously beaten 4-3. This time, they were playing at home and on senior night. While they had just two seniors on the team, they were still looking to give them a great sendoff. However, fate had other plans. Senior Nick Mojica underwent an injury about 20 minutes into the game. From there, the Hawks lost their composure, letting in five second-half goals and losing the game 7-4. After this loss, a small senior night celebration still ensued. Head coach Tim Milner thanked the seniors, acknowledging that they “showed up on the first day and realized that this team was a long term project while they had a short period of time left.” Despite this, the seniors still “worked hard every day to improve the young team. They really helped them progress and taught them a lot.” He hopes that in a few years they can come back and see just how much The Gregory School soccer team has improved.