LAVEEN-- Marcos de Niza dominated the Alhambra Lions, 68-26, in their first game of the season on Monday. The Padres' goal this season is to win the state championship and if this game is any indication of what they are capable of, then they are on the right track.

The Padres' head coach, David Stark, implemented a full court press that they ran after every made basket. This tight full-court defense completely shut down the Lions' offense. “We like to run a diamond press, which is a zone press,” said Padre center Tony Mottola, one of four MdN starters to finish in double figures in scoring. “We use it to intimidate the other team and to try and tire them out.”

This strategy worked to perfection in the first quarter. The Padres had many opportunities to extend their lead but thanks to a few bad shots and turnovers the Lions were able to keep it close. The buzzer sounded at the end of the quarter and the Padres were on top, 16-11.

The second quarter is where the Padres’ defense completely took over. Only allowing four points and forcing turnover after turnover, MdN quickly put the score out of hand. After a plethora of transition opportunities that were opened up by the defense, the Padres led 39-15 heading into halftime. 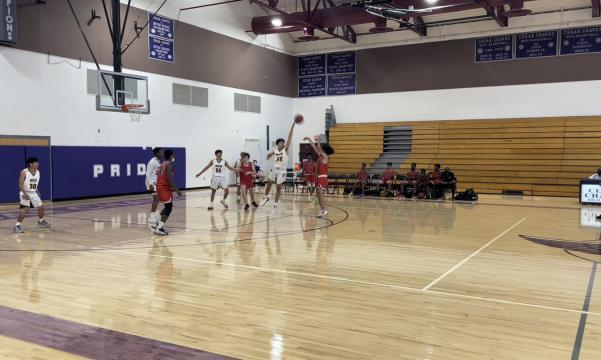 For a team with aspirations of winning the state championship, this was a great start to the season. Already up big in their first game, the Padres were not slowing down. The second half began and it was much of the same. The Padres continued to run their press defense and the Lions continued to turn the ball over.

At the end of the third quarter, the Padres led 56-20. At this point coach Stark called for his team to get back on defense rather than continuing their full-court press and brought in the reserves to get themsome extra playing time.

“It's our first game, we have a lot of stuff to work on,” said coach Stark, whose squad finished 9-9 last season. “It was nice to get everybody in there and get some reps in. For a lot of these guys it is their first time on varsity so we wanted to get them some experience.”

By the time the final horn sounded the Padres were ahead by 42 points. This was just the beginning for the Padres as they look to make a run at the state title. “Our goal at Marcos de Niza every year is to make it to the state championship, that's what we strive for,” said coach Stark, whose Padres finished 9-9 each of the past two seasons. “So every one of these games that we play from here on out will hopefully prepare us to get there.”

Marcos de Niza will face Camelback High School on Tuesday in the second game of the holiday tournament.