4A VOLLEYBALL: Salpointe outlasts Sunrise Mountain 3-2 in an epic battle 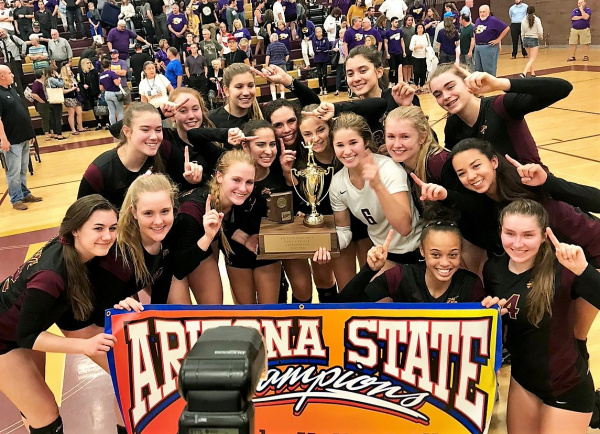 It took five sets and over two hours for Salpointe to outlast Sunrise Mountain 3-2 in the 4A title match held at Mountain Point High School Thursday night but that’s just how the Lancers wanted it.

“I was hoping they would bring it and they did,” said Salpointe senior setter Peyton Lewis. “I wanted a tough match to prove ourselves.”

Lewis came through with 51 assists in the final match of her career and the Lancers needed every single one, especially number 51. It was a night when no lead was safe, so a 13-11 margin for Salpointe (34-6) in the final set didn’t mean much, especially with Sunrise Mountain (29-10) on the court.

Payton Harmann and McKenzie Weise connected to cut the lead down to 13-12 but Madison Sundholm put up a block in the middle to give the Lancers a 14-12 lead. That was followed by a block from Adna Mehmedovic to turn back Salpointe on the first championship point. Typically, Lewis would look for her senior partner Alanna Duarte on the outside, but Andrea Owens was occupying that position and the freshman sensation put the ball away for the win, 15-13.

Duarte finished the night with 16 kills and Owens added 15. Owens is the Southern Arizona Freshman of the Year for good reason and her poise ability is understandable, considering her grandfather played basketball for the Peruvian National Team and her mother, Natalia Owens, played volleyball for Peru and Washington State – while Andrea was a toddler.

Lewis reached 1,000 assists for the third time in her career and almost one quarter of her career assists were put away by Duarte. Duarte, like Lewis, welcomed the spirit and fight shown by the Mustangs.

“We had to dig deep,” Duarte explained. “They tested everything that we are. They made us prove it on the court. I think this win was more rewarding because of how they played and how our team responded like I knew we would.”

The Lancers beat Greenway 3-1 last year to win the 4A championship for the first time in school history.  A “big school” volleyball championship form Southern Arizona had become so rare, that the win was the first from the Tucson area in 23 years.

“It was crazy when we won last year,” Duarte added. “I’d have to say our chemistry pulled us back together to do it again. It’s a good feeling to know you have someone behind you. Someone who has your back.”

It was easy to look past the Mustangs, even though the fourth-seeded team knocked off the top-seeded Cactus program 3-0 in the semifinal round on Tuesday night. But, as everyone in the Mountain Point gym found out, nothing is easy with the young talent Sunrise Mountain put on the court.

“We only have one senior on the team,” head coach Bob Levardo said. “This was the best year we have ever had, and they battled every second and every point. It’s still difficult, especially to come up a couple of points short but out future looks very bright. Very bright.”

The Mustangs have nine juniors in uniform, with Hartmann and outside hitter Jocelyn Teichman leading the way, but, like Salpointe, the Mustangs have a dominate freshman hitter in McKenzie Wise. Wise leads the team in kills and she kept the Lancers off balance during several important runs.

The Lancers took a 19-16 lead in the first set, but Hartmann found Wise three times down the stretch to help outscore Salpointe 10-5 for the 26-24 win. The Lancers returned the favor by turning a 21-18 deficit in the second set into a 25-23 win thanks, in part, to a couple of aces from Lewis.

The two teams played to a 20-18 score in the third set but Lewis found Owens twice, Sundholm put down an ace and Abby Russell scored on an assist from Lewis for the 25-19 win. Down 2-1, the Mustangs, as usual, were unfazed and turned a 19-19 tie into a 25-22 win to force the fifth set.

The championship was the second for Heather Moore-Martin on the girl’s side and the two trophies go along with the two she won coaching the boys at Catalina in 2010 and 2011. Moore-Martin is the only coach from Southern Arizona, regardless of school size, to win a championship coaching boys and girls. Her record might never be broken, unless she is the one doing the breaking – again. 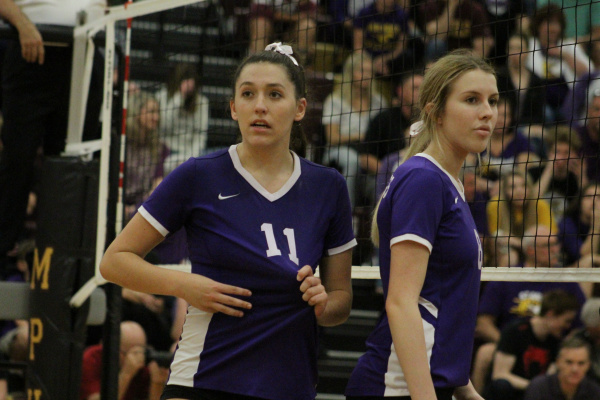