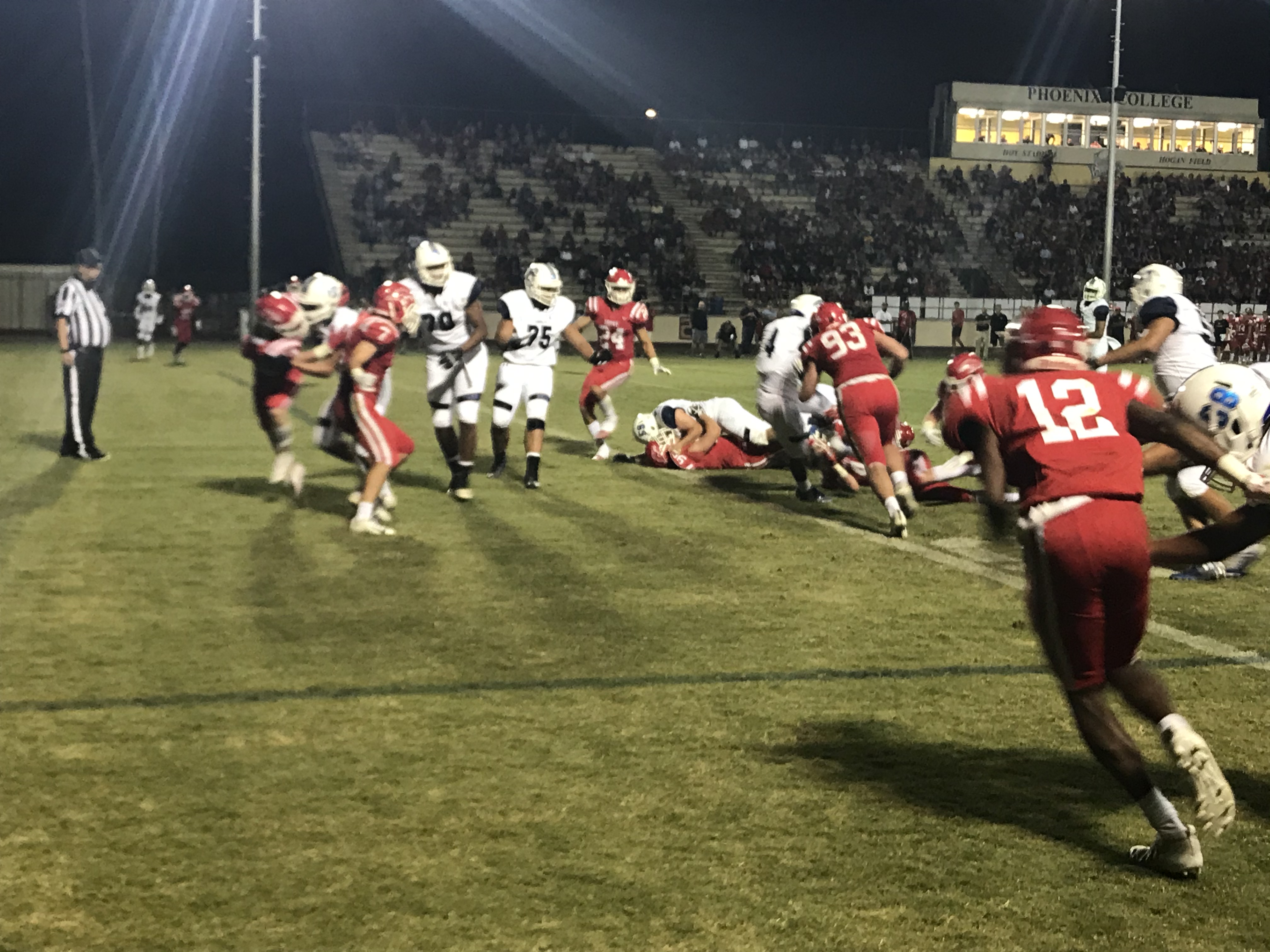 Chandler looks for more scoring from running back Dae Dae Hunter (4) as the Open Division playoffs get underway on Friday. (AzPreps365 photo)

Obervations for each game as the Open Division football playoffs debut, 6A through 2A continue and 1A wraps up its season this week:

#8 Chaparral (8-2) at #1 Chandler (10-0) - Chandler's defense has handled offensively-challenged teams with shutouts and single-digit final totals. Against above average offenses the unit hasn't been so stingy. Chaparral may be able to score points as it's done all year, just not enough to stick with Chandler due to the Firebirds' deficiency on defense particularly vs. the run.

#5 Pinnacle (8-2) at #4 Salpointe (9-0) - Would have given Pinnacle the edge with JJ Johnson at the controls, but the youth and inexperience at QB favors Bijan Robinson and Co.

#6 Horizon (9-1) at #3 Saguaro (9-1) - Saguaro would have outlasted Horizon with the Huskies healthy at QB. Question now is how long can Horizon make it a game.

#7 Hamilton (8-2) at #2 Centennial (9-1) - Best game of the first round. They've met before and split four meetings in the past decade or so. Like Hamilton by a smidge.

#8 Desert Ridge (7-4) at #1 Red Mountain (10-1) - Red Mountain is favored, but one reservation is its schedule featured only three teams with winning records- all faced before Labor Day. Desert Ridge was one of those and the Mountain Lions won decisively. The Jaguars faced a steady diet of playoff teams in September and October and seek revenge. They have a shot if their physical play of late continues.

#5 Highland (8-3) at #4 Queen Creek (8-3) - After a mid-October funk, Queen Creek recovered some life the last two weeks. The Bulldogs will  have to play better than they did three last time they faced Highland on October 25 and were drubbed, 38-3.

#15 Mesa Mountain View (6-5) at #7 Liberty (7-4) - Upsetting Brophy is a big lift for Mountain View's program, which was without a playoff win for a decade. The Toros face a better offensive opponent this week and they've had trouble stopping high-scoring foes like Red Mountain, Perry and Liberty. Plus Liberty now knows not to take the Toros lightly.

#5 Millennium (9-2) at #4 Casteel (8-3) - This will be the fourth San Tan Region opponent Millennium has faced this season. The Tigers beat the bottom two teams in the region, Maricopa and Gilbert and were blasted by the second-best team Higley. Casteel ranks closer to ability to Higley than Gilbert and Maricopa. My Monopoly money is on Casteel.

#6 Campo Verde (8-3) at #3 Higley (8--3) - You know Campo Verde wants desparately to scratch that Higley-Williams Field-Casteel itch that's plagued it this decade. They get another try, but Higley is hot winning eight of its last nine games.

#9 Gila Ridge (10-1) at #1 Sahuaro (9-2) - Kudos to Gila Ridge for ending the football playoff win drought for the the Yuma district. Bad thing is Gila Ridge knocked my alma mater, Coconino, out of the playoffs last week. Likely Gila Ridge won't enjoy the long bus ride home from Tucson this week as it did to Flagstaff last week.

#12 Casa Grande (7-4) at #4 Desert Edge (8-3) - More kudos to Casa Grande for its playoff breakthrough ending a 26-year dry spell. Unfotrunately, the Cougars face the best team remaining in the 4A playoffs this week in the Scorpions.

#9 Benson (8-3) at #1 Round Valley (8-2) - Got to like Round Valley to reach the semis for the sixth time in the last seven years. Seven of the nine teams the Elks played in the regular season qualified for the 2A or 3A playoffs. They own win over Benson from a month ago, 42-28.

#11 St. Johns (9-2) at #3 Phoenix Christian (10-1) - St. Johns coach Mike Morgan can become the winningest coach in Arizon history (looking for win No. 337) if the Redskins pull off the upset. Think PC is a touch better and will put off the record-breaking win to next season behind running back Man-Man Freeman.

#7 Thatcher (7-4) at #2 Trivium Prep (10-0) - Not Thatcher's best team of the last four years, but expect the Eagles to get back to the semis if they slow Minotaurs' running back David Marquez, who is 31 yards shy of 2,000 for the season. Thatcher more battle tested than Trivium despite the difference in records.

#3 Superior (9-1) vs. #1 Williams (9-1) at Coronado HS  - Have to believe Williams upends defending champ Superior and reclaims the title it won in 2017. Williams warmed up the last two weeks by allowing one touchdown combined  in wins over Arete Prep and Hayden.