Sabino girls use late run to get past Ganado 39-32 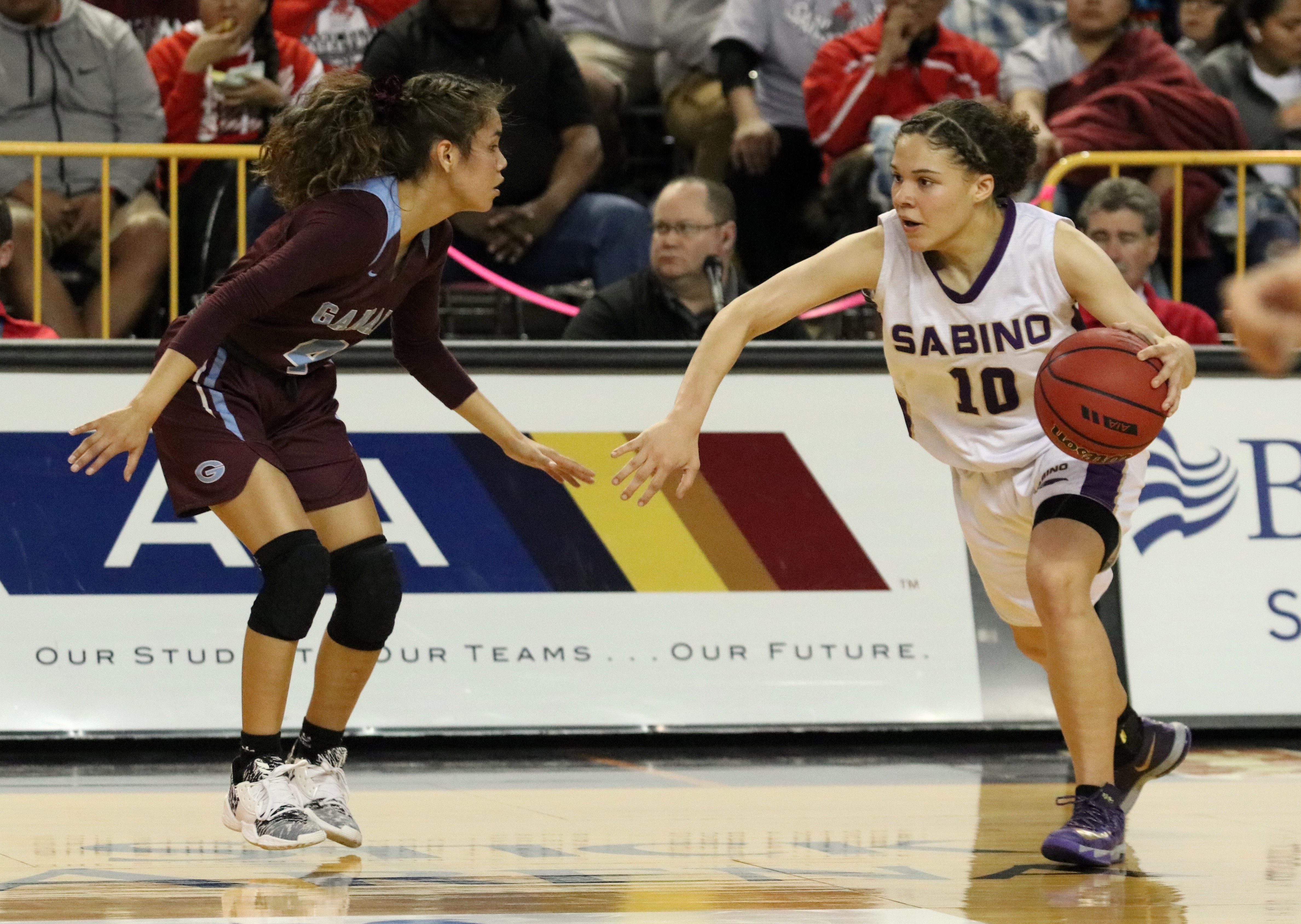 The Sabino girls are headed back to the state final for the first time since 1990. (Andy Morales/AZPreps365.com)

No. 1 Sabino beat No. 5 Ganado 39-32 Friday night at the Veteran’s Memorial Coliseum to advance to the 3A state championship game against No. 2 Page to be played Saturday night at 6 p.m.

Page beat No. 3 ALA-Gilbert North 37-35 in the first semifinal game and the Eagles led from the beginning after sprinting out to a 7-0 lead but the Sand Devils were able to cut the initial deficit down to 11-7 after the first period and then ALA-Gilbert North took a 21-16 lead into the locker room. The Eagles went up 28-25 after three but Page made a move in the fourth and cut the lead down to 30-29 with 4:15 left but Wyann Whiterock hit a deep 3 to temporarily turn the Sand Devils back.

Miquedah Taliman forces a jump ball to cap off the comeback victory for Page #azpreps365 pic.twitter.com/bQ50DSLoms

Miquedah Taliman got the ball back on a jump ball and Page held on for the comeback win.

Begay finished with 17 points, Camryn Nockideneh had eight and Emma Yazzie scored seven for Page and Keeli Kaye finished with 11 for ALA-Gilbert. Kyleigh McCabe and Kymani Markham scored six each.

In the Sabino victory, Ganado opened up a 7-1 lead after the Sabercats committed a few early transition turnovers but the Sabercats closed the first half on a short run despite missing five free throws and Ganado led 11-7 after one. Sabino standout Kiya Dorroh left the game with injury with 5:43 left in the half with the Sabercats down 11-9 and any momentum built up switched back to Ganado and the Hornets led 19-11 at the half.

The Sabercats opened up the third quarter on a 13-5 run and Dorroh tied things up 24-24 with 3:37 left in the third. The Hornets ended the quarter up 28-26. The Sabercats had two chances to take a lead with about six minutes left in the game and Ella Berg put the team up 30-28 with 4:46 left.

Up 31-29, The Sabercats missed three straight layups to extend the lead and Michelene Coleman made a free throw to cut the lead down to 31-30 with 2:07 left. Another missed opportunity led to two free throws from Abigail Benally.

Sabino girls win it 39-32 #azpreps365 to the 3A final pic.twitter.com/qBPsuMa8rd

Lauryn Mannion put Sabino back up 33-32 with 1:19 left and then a turnover gave the Sabercats the ball with 51.2 seconds left. Berg put Sabino up 35-32 and then another turnover with 26.1 seconds gave the ball right back to Sabino.

This will be the first finals appearance for Sabino since winning it all in 1990. Dorroh led Sabino with 10 points, Berg added nine and Doty scored seven. For Ganado, James and Coleman scored 11 each.