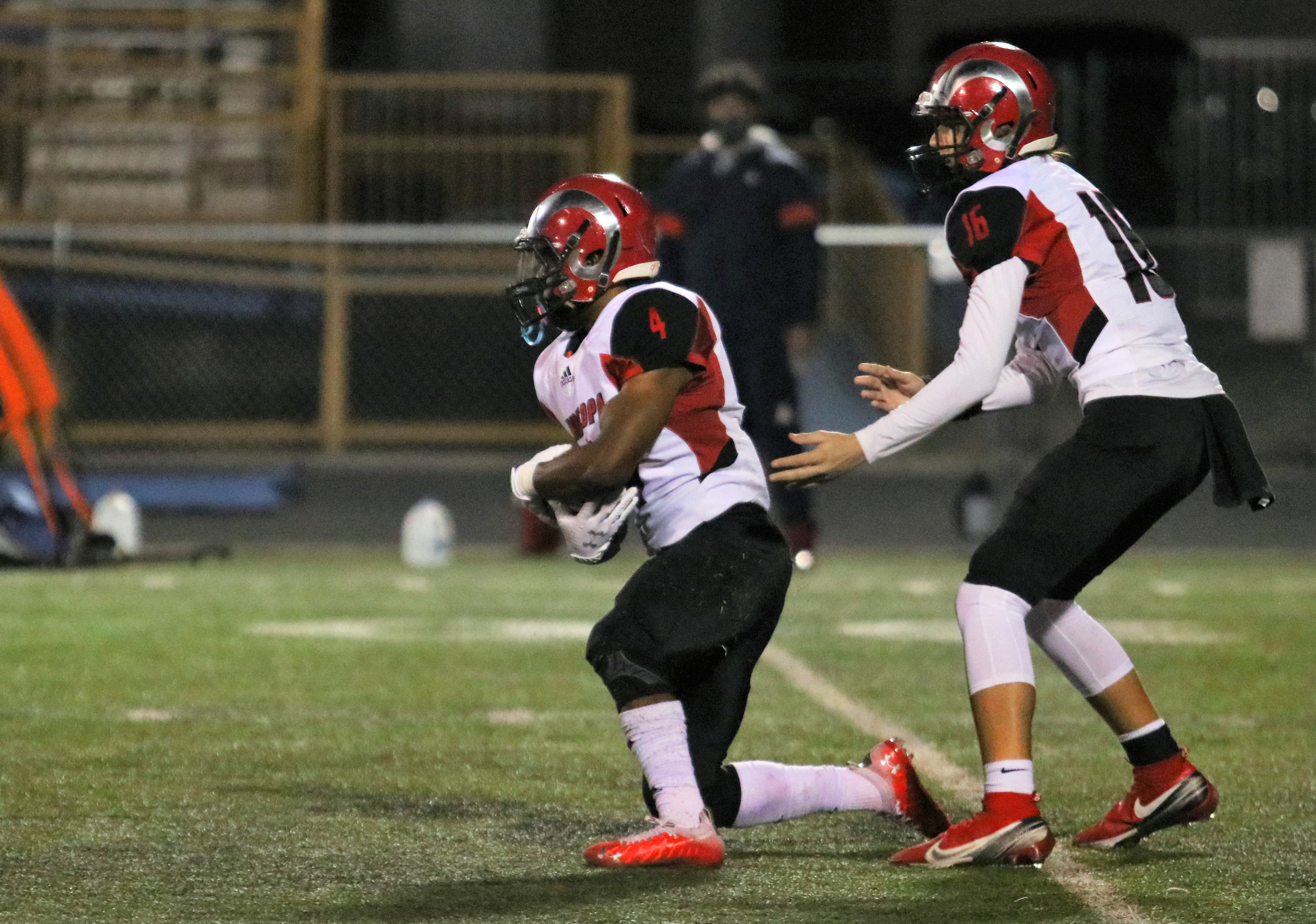 Maricopa moved to 2-4 on the year beating Marana 18-6 Friday night in a game defined by penalties, punts, turnovers and the play of senior RB Mister Chavis. Chavis finished the night with 76 yards on 20 rushes but he was a bright spot in a very difficult game with a touchdown run of five yards, a TD catch of 10 yards and an interception return of 65 yards to account for all the scoring in the game.

The was the first game of the year for the Tigers which accounted for over 100 yards in penalties, eight punts and four turnovers but the Rams were also misfiring despite coming in with five games already played. The Rams also gave up four turnovers in the game and the team was equally flagged. The game was played and won on the defensive end.

Elijah Hughes ended Marana’s first drive with an interception but Samuel Brown returned the favor three plays later only to have Racellus Johnson recover a fumble for Maricopa three plays after that.

Brown came down with his second interception in the final moments of the first quarter but the Tigers were forced to punt and the Rams put together a 50-yard scoring drive with Chavis running the ball in from five yards out for the 6-0 lead with the conversion failing.

Josh Roman hit Duncan Fouts for 67 yards to put the Tigers at the 3-yard line but Marana was unable to punch the ball in and Maricopa took over at the one. The Marana defense held and the Rams attempted a fake punt at their own eight but the Tigers were unable to take advantage once again and the short drive resulted in a missed field goal.

Keire Earl picked up another interception for Maricopa and the Rams scored off the turnover after Cassius Campbell hit Chavis from 10 yards out for a 12-0 lead with 11:45 left in the game. Chavis made it 18-0 on a 65-yard interception return with 5:54 left and the Tigers responded with a 61-yard drive that ended with a 20-yard pass from Elijah Joplin to Isaiah Roebuck with 3:04 left.

Jesus Velarde pounced on a Ram fumble three plays later but the game played out to the 18-6 margin.

The Rams will travel to Gilbert (2-4) next week and Marana is slated to visit Walden Grove (2-0). None of the teams from the Tucson area will qualify for the state playoffs, other than Pusch Ridge, Salpointe and Buena, but the 5A Conference will only take eight teams for bracket play and Maricopa and Gilbert might find that a difficult hurdle.

Word came down during the game that Buena was called back to Sierra Vista and the scheduled game against Ironwood Ridge was cancelled. In a very quick turnaround, The Nighthawks scheduled a home game against Cienega on Saturday at 2 p.m. to replace the Buena game.

Cienega is 39-1 against teams from Southern Arizona dating back to Oct. of 2015 and Ironwood Ridge was the only team to beat the Bobcats and that game took place in 2018.

Salpointe and Buena should become playoff eligible next week when, and if, the Colts host Cienega and the Lancers play at Marana Mountain View on Saturday, Nov. 14.