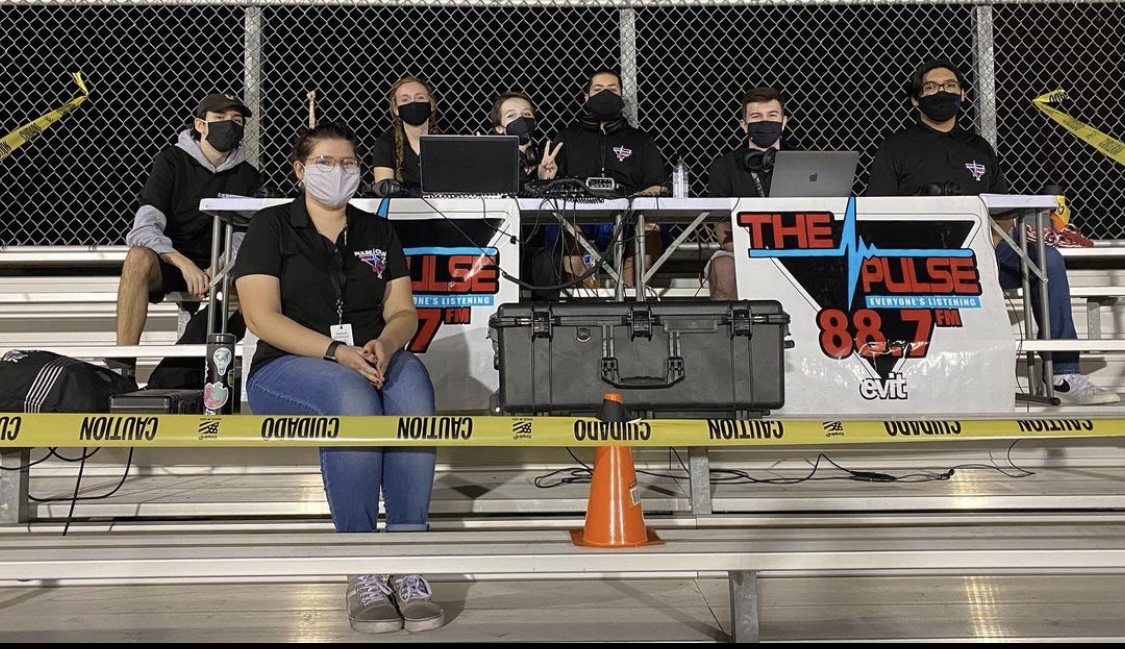 Sports and dreams often go hand in hand with each other. Whether it's the dream of throwing a perfect game, winning a championship, or being the best player in the world, dreams in sports are always together.

Those who may not be exactly equipped to make the big catch or throw a Hail Mary pass have to try a different approach by reporting on the Hail Mary play that won the game. The great ones, both journalists and athletes, never stop working towards achieving their dreams. Zach Larson, a broadcaster for 88.7 The Pulse, is a great example of someone taking their dream and running with it as he's been calling AIA-affiliated games even through the global pandemic.

“I've played sports all my life. I've played t-ball, soccer, and a lot of football flag football,” he said. “So, but I slowly realized that I was not athletic enough for the sports world and since I wanted to still be a part of it I thought the next best thing is probably to go into sports reporting or journalism.”

Larson grew up just like any Chandler resident, an Arizona Cardinals fan. He had his first real taste of professional sports when he was barely 8 years old.

“I would say my first true memory was back in 2008 for Super Bowl 42 when it was in town," he said. "I went to the NFL rush event. And I went to [Super Bowl] experience and I think that started me down the path to really liking sports. Then the next year of course the Cardinals go to the Super Bowl so I was pretty much hooked for life.”

Larson attended East Valley Institute of Technology in the fall of 2017 as a junior in high school after what he considered was a low point in his life.

“I was just following off a really rough year of freshman high school,” he said. “My grandmother passed away like a couple weeks before Steve Grosz walked into the classroom. He pretty much said ‘Hey, you know if you want to do something EVIT (is) the place to do it, you just have to figure out what you want to do.’”

Grosz, the lead instructor at EVIT, goes to high schools across the Valley to try to connect with students who are looking to jump start their future careers. As a teacher and General Manager of the radio station, he talked in great deal about the radio program.

“I found what I wanted to do because I never really had a sure idea of what I was going to do. It kind of took a lot of time to figure out that I wanted to do sports broadcasting in journalism, but once Steve presented that for our classroom I was like, ‘OK, that's what I'm going to do,’” said Larson.

Starting the spring of his sophomore year he would drive, or be driven, to the EVIT campus every Sunday morning and host the Pulses’ Sunday morning sports show The Sports Beat alongside students older than him.

Larson was a color analyst during his first year at EVIT, learning the ropes and what goes into calling a game. He called his first basketball and baseball games in the spring.

At the end of the first year, student positions open up for the upper class students and Larson was an easy choice for Dave Juday, Pulse Sports Student Director.

“If I could have picked one person who embodied me, and all of the qualities that I bring to the table, there was that he was like me any day,” Juday said. “And we were just in sync on so many things. We both agreed on the direction that the department needs to go in and his work ethic was one of the best.”

Larson, again, began to run with the opportunity and describes this time as a student director as life-changing.

“I think the position was just a huge deal for me. I've really struggled to get a hold of a leadership position [in high school] just because I'm not that much of an outspoken guy ,” he said. “I'm very introverted but this makes such a big deal to me that I was willing to do whatever it took to get that position. The job itself was exactly what I wanted to feel I wanted to be.”

During this time Larson also began to call football games. His first game went well and ended up being a defining moment that he carries to this day.

“I really didn't say a whole lot. I had a couple drives, but the one thing that in that game that I kind of told myself (was), ‘OK, I can do this ... it's a memory I won't ever live down.’ I was able to directly call what the Chandler offense was going to do,” he recalled. “Right before the play I said, I think they're going to run a play action pass here and look towards the middle and throw it in for a touchdown.”

Even after he graduated in the spring of 2019, he didn't lose his love for the program and willingness to help. He called more high school football games in the fall of 2019 and 2020.

“You know I reached out to him over the summer and told him, you know, flat out, I just won't have the time, you know, as you said to be able to do the necessary preparation during the week and he's like whatever you need,” said Juday.

But things would be a little bit different because of the COVID-19 pandemic.

“I think the thing I'll definitely noticed the most from this season was just the amount of emptiness. There was no crowd roaring after every touchdown. There was a very limited number of players, because of covert hitting in some of the schools. So, it just felt empty the season, felt empty, but obviously that's because they don't want to risk expanding the virus out to everyone,” said Larson.

With that love and passion, Larson hopes to one day be a national play-by-play TV broadcaster or sports reporter. Either way, he's bound to do great things but always remember where he came from.

“As I said, even though he's gone and he technically graduated two years ago, you know, he's still part of the Pulse sports family," Juday said. "And he wants nothing more than to see the program continue to succeed.”