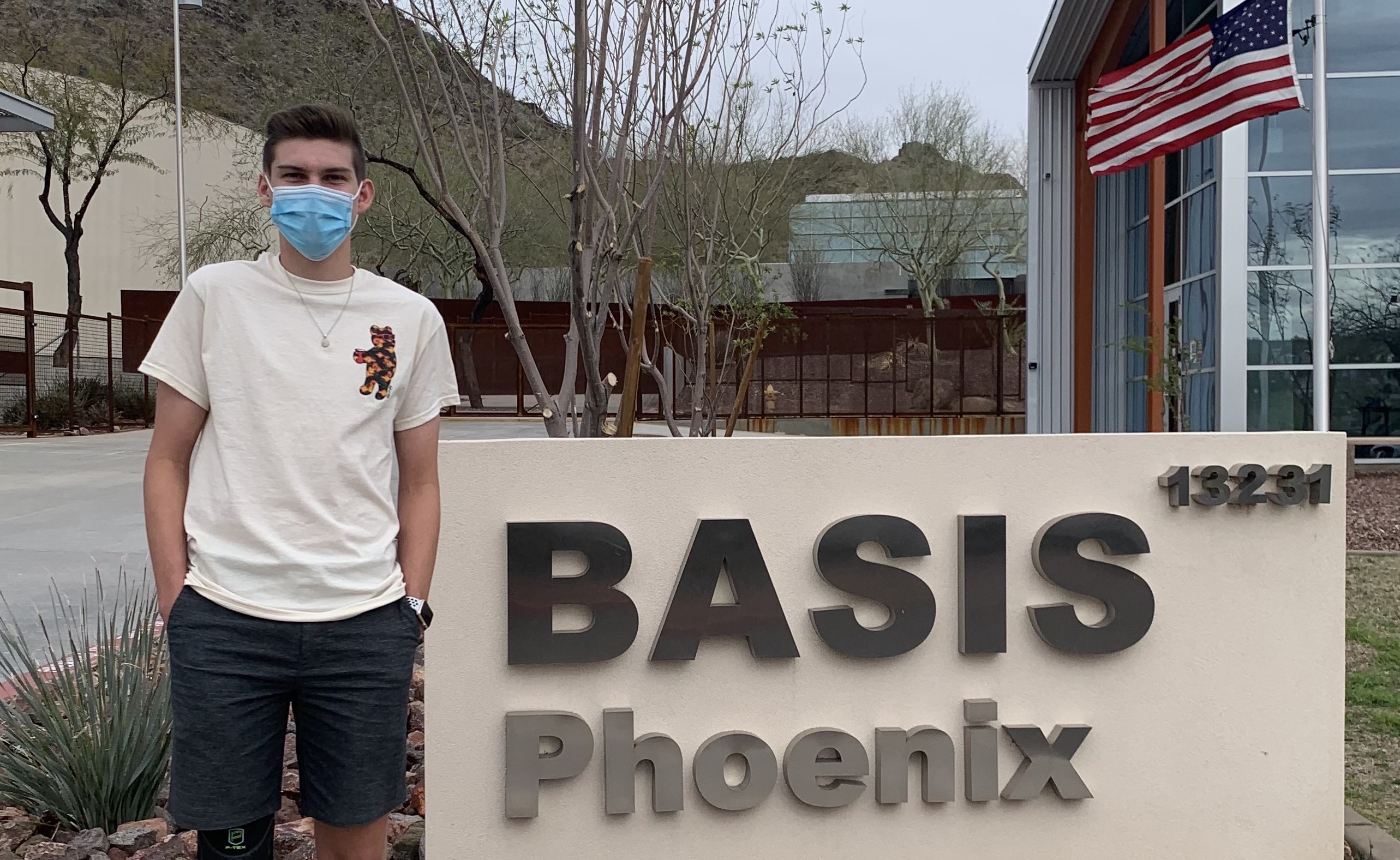 Junior Liam Verstraet shines both on and off the field at BASIS Phoenix. (Photo courtesy of Mansi Dabholkar)

For a BASIS Phoenix soccer player, his unique upbringing has allowed him to have success on the soccer pitch and in the classroom.

Junior Liam Verstraet, a 3A Central Region 1st Team selection, helped lead the BASIS boys soccer to the quarterfinals, the furthest in school history playing just two seasons in the AIA. Behind his 19 goals and nine assists on the season, he’s a high schooler whose discipline is like no other.

His discipline in studies started at the age of 3 when he began attending the International School of Arizona where all of his classes were taught in French.

“We knew he would have a good base and knew from the kids that end up joining an American school afterwards wouldn’t have a problem,” Sebastien Verstraet said. “And that’s what happened.”

Liam’s father, Sebastien, was born in France, where Liam’s French-speaking grandparents reside. It was there that Liam spent week-long summer trips every year getting immersed in the culture and speaking the language daily,  so he was able to speak with his grandparents. He then would return back to the states to continue his elementary studies in French.

It wasn’t until fifth grade that he began learning his native language English at BASIS Phoenix. Today, he is now fluent in French and English, and is taking Spanish classes.

Although Liam’s transition was fairly smooth, his parents worried whether he truly enjoyed it because more often than not, he was up past midnight studying.

“I just remember 9th grade (at BASIS) being his hardest year,” his mother, Teresa, said. “I never have to tell him to do homework but I was worried about his sleep.”

Behind those study sessions alone in his room, his motivation to succeed is simple – he just wants to keep doing well to set him up for life. That same drive keeps Liam’s nose in his books during the weekdays with no videogames or hangouts, by his choice.

However, on weekends, Liam joins his mother to visit the farm animals at Aimee's Farm Animal Sanctuary, a place for animals that have been discarded.

“He personally enjoys hanging with the humans maybe more, but I think he likes it enough,” she said. "He just doesn’t like waking up early,” Teresa said.

While not a friend to early mornings, the discipline to get up early seeps into his ability to be a leader on and off the field.

Esteban Azagra, a teammate of Liam, whom he met at BASIS Phoenix, said behind Liam’s quiet demeanor he’s a competitive teammate and one whom the team can look to. He reflected back on the many games the team would be down and how Liam’s ability to knock down crucial goals helped lift the team's spirits.

“Although it doesn’t look like it because he’s not talking a lot, you can see how much work he puts into training for his shot to become that good,” Azagra said.

BASIS coach Jules Veloria agreed that Liam is a ‘level-headed’ individual who shows little emotion but leads by example, not taking a day off or missing a single practice.

While Liam is  a kid of few words, the high standards he puts on himself can be worrisome.

Sebastian reflected on the instances where they questioned whether attending BASIS was the right thing because they weren’t sure he was happy, given the difficulty.

More than anything, his parents both voice the importance of Liam being happy with himself and what he’s doing.

“I rather him be happy and less successful than be very successful and not happy,” Sebastian said. “You only put so much pressure on yourself and, at the end you’re not having fun doing it.”

Liam’s two areas of interests to study in college are inspired by his deep passions.

As of now, Liam hopes to study psychology to help athletes overcome their mental blocks -- something he struggles with at times. Or, he plans to become a psychiatrist to help others with addictions -- something some of his family members struggled with.

While Liam may not be sure of the exact profession, his eyes are set to attend prestigious colleges, such as Stanford or University of Chicago.

For Liam, the early challenges and unique experiences have and continue to keep him focused on the bigger goal.