Pusch Ridge beat Sahuaro 8-2 Thursday night to help solidify a high ranking in the 3A Conference with the playoffs coming up quickly on May 8. The Lions improved to 11-3 on the year and Sahuaro fell to 7-8 in the 4A Conference.

The Cougars needed this win to help fuel a final push towards a possible playoff spot but the team came in ranked No. 28 with only the top 16 teams earning a berth at the 4A level. The 3A Conference will also have a 16-team playoff bracket but the conference allows for automatic berths for each of the six region champions.

As of Friday morning, only Sabino is guaranteed a playoff spot in the 3A Conference thanks to a perfect 8-0 record in the 3A South Region, including two wins over Pusch Ridge. The rest of the region races look like they will come down to the wire and a few of the current region leaders are ranked outside of the top 16 which means some higher-ranked teams might get pushed out of the playoff picture to make room for the region champions.

Pusch Ridge sophomore Alessandro Castro took the mound against Sahuaro and he finished the night with 12 strikeouts to help move his record to 6-1. It is the second time the lefty finished with over 10 strikeouts in a game this year with the one coming in a 7-5 loss to Sabino. He has 63 strikeouts this year and 108 in his career. 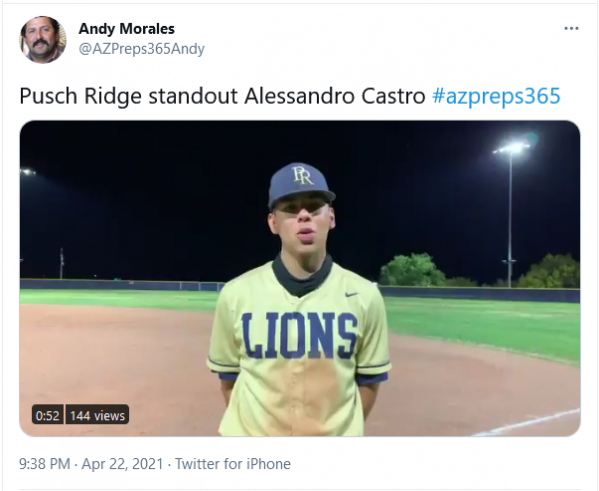 Castro also leads the Lions in batting average (.551), hits (27), doubles (9) and triples (4) but it was his freshman brother, Andres Castro, who came up with the first big hit of the game with a double in the bottom of the second. Hayden Hallett drew a two-out walk before the double from Andres to put two on and then Jacob Mustain delivered on a single to bring in both runners. Alessandro followed with an RBI and Logan Brown brought in the final run of the inning to give Pusch Ridge a 4-0 lead heading to the third.

Ethan Jones hit a triple to start the fourth and Jonathan Carroll brought him in to put the Lions up 4-0. Meanwhile, Alessandro held Sahuro in place until Gamaliel Vasquez reached on a error in the top of the fourth and Shawn Barros followed that with an RBI double to cut the lead down to 5-1.

The Cougars added a run in the sixth after Barros walked with two outs and Diego Solano knocked him in to make it 5-2 Pusch Ridge. The Lions also did some damage with two outs in the bottom of the sixth thanks to an infield hit from Alessandro, an RBI double from Isaac Rolon, a single from Logan Brown and two RBI from Jones. The three runs gave the Lions the 8-2 victory.

Carroll (1-1) took the ball from Alessandro in the sixth inning and Sam Sides got the start for Sahuaro with Jaden Majuta also taking over in the sixth.

Sahuaro will host Cholla (0-12) on Friday and Pusch Ridge will host Safford (4-6) on Tuesday. 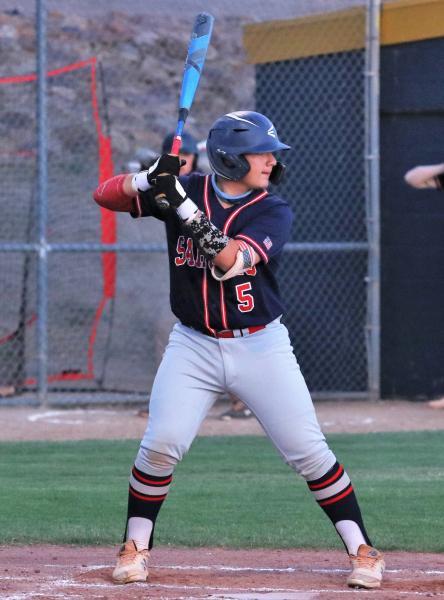 Shawn Barros had an RBI double and two walks for Sahuaro. (Andy Morales/AZPreps365)