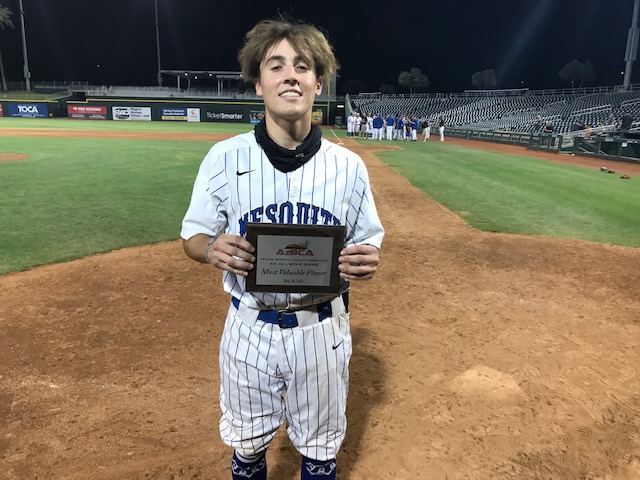 The first inning was a precursor for what was in store for 4A North hitters from South pitchers Saturday night in the annual Arizona Baseball Coaches Association All-Star game at Goodyear BallPark.

Seven pitchers combined for 13 strikeouts and a three-run rally by the South in the bottom of the fifth proved decisive in a 3-1 triumph.

Salpointe Catholic's Liam O'Brien started for the South and struck out the side in the top of the first and fanned four in two innings of work. Canyon del Oro's Dante Schindler followed with two scoreless innings and three more Ks.

An inning apiece were next for Mesquite's Zach Zwaschka, Poston Butte's Colton Vercoe, Vista Grande's Anthony Bolanos, Poston Butte's Octavio Flores and Mesquite's Luis Morales. Vercoe (3 Ks) and Bolanos (2 Ks) were others with mulitple Ks. The game was scoreless through the first four innings with the North getting two innings each from Flagstaff's Justin Hanson and Notre Dame Prep's Tyler Herges to keep things even.

Zwaschka was chosen the game's MVP. He was 1 for 3 at the plate with a stolen base, run scored and was the winning pitcher. Zwaschka surrendered the only run in his inning of work in the top of the fifth. He allowed a triple to Flagstaff's Sylas Clery and infield RBI single to Shadow Mountain's Jayson Wren.

Zwaschka, however, started the game-turning rally in the bottom of the inning with a single and stole second. A one-out, bloop single by Seton Catholic's Rocco Gump put runners at second and third. Zwaschka and Gump scored on a solid two-run single to center by Saguaro's Frank Digregorio. The third run of the inning scored on a throwing error.

The North put a runner on in each of the seventh, eighth and ninth innings, but couldn't mount a serious threat to the lead.

The North had no hitters with multiple hits and one other extra-base hit besides Clery's triple. It was a double in the eighth by Bradshaw Mountain's Jordan Massis. Vercoe led the South going 2 for 3 and reaching base three times in four plate appearances.

The South All-Stars’ 20-hit attack propelled the team to a 32-10 victory over the North in the 1A-3A All-Star game Saturday at Goodyear Ballpark.

Safford’s Alyxx Garcia’s two hits and four RBI’s earned him Most Outstanding Player honors. The first and fifth innings were the only ones in which the South didn’t score a run.

Its hit barrage was highlighted by eight run innings in the fourth and sixth.

“Everything was going right for us,” Garcia said. 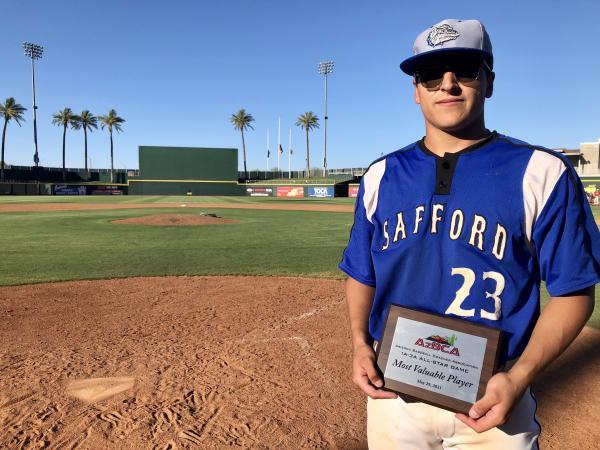 Seven South pitchers held the North to eight hits, with three of those hits tallied by leadoff Zane Corum of Winslow. Phoenix Christian’s Brock Zeller reached base three times and had to hits for the North.

After the game, the Arizona Baseball Coaches Association announced its Coaches of the Year in the 1A (St. David’s Ron Goodman), 2A (River Valley’s Billy Fregozo) and 3A Conference (Sabino’s Shane Folsom). - Jose Garcia