Amphi over Flowing Wells 27-24 at the Kickoff Classic 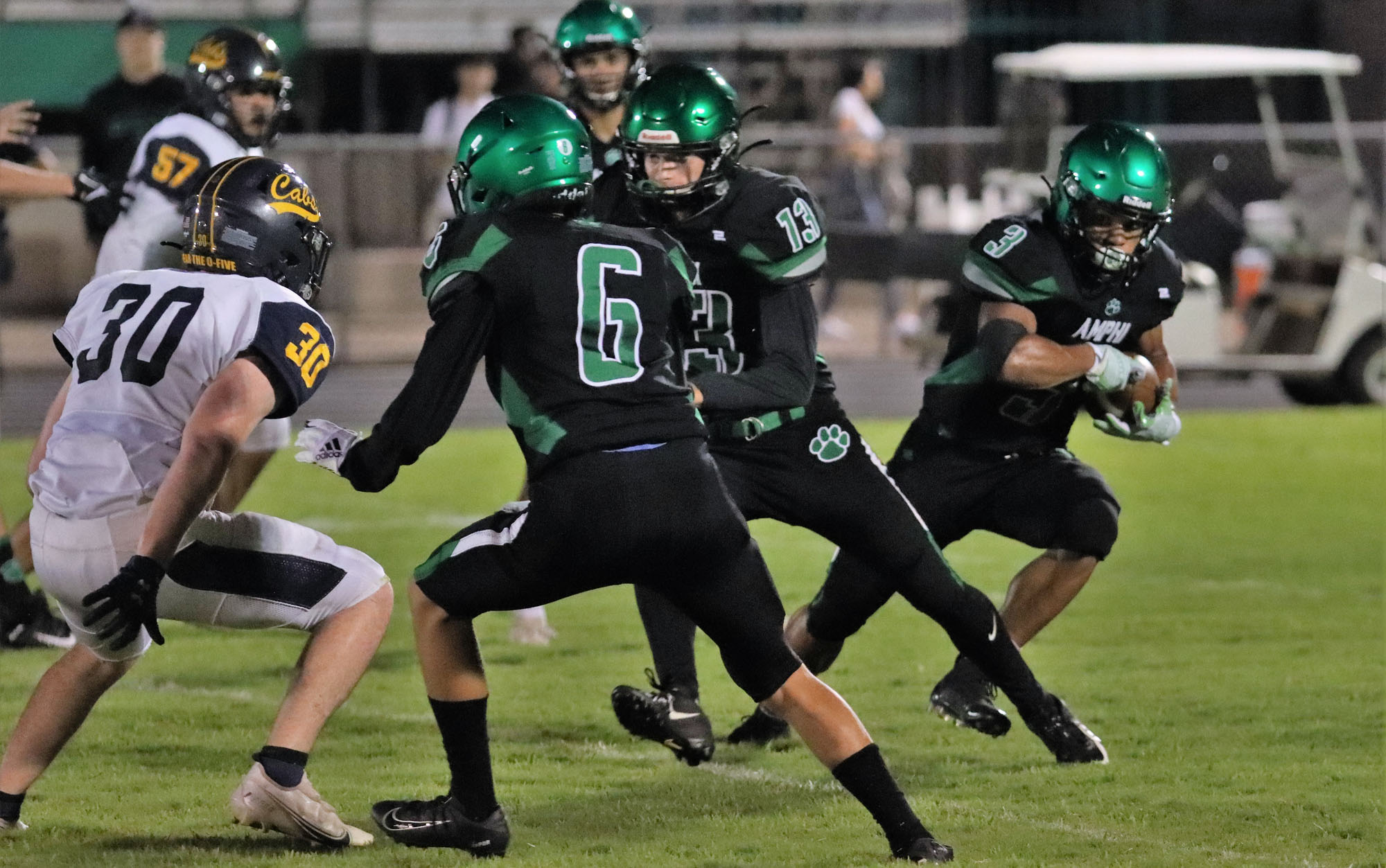 Itzael Carbajal (6) and Ashton Haynes seal off Tyler Evans to give Kiko Trejo room to run on the outside. (Andy Morales/AZPreps365)

The “Battle for Prince Road” was fought in the trenches where mistakes were turned into opportunities for some, and disappointments for a few others, but Kiko Trejo made the most of his 25 carries Thursday night to help lead Amphitheater to a comeback victory over Flowing Wells at home.

Down 12-0 with 3:50 left in the first quarter, Trejo scored four touchdowns on 245 yards rushing the rest of the way to hold off the Caballeros 27-24 to give the Panthers an early boost to start the season under the bright lights of the Coaches for Charity Kickoff Classic.

The football season unrolled in a unique way this fall with the 8-man schools getting things going on Friday, Aug. 20 and then the “small schools” followed a week later. The 4A, 5A and 6A schools had to wait for this week to hit the field for real and four games got that phase going on a rare Thursday night, including the one held at Amphitheater, and an incredible 95 games are scheduled for Friday night across the state. There’s almost something for everyone this week.

The Coaches for Charity organization helps run several sporting events in Southern Arizona, such as the Kickoff Classic and the MLK Basketball Classic in January, to help raise funds for scholarships, and teams position themselves to be selected for that opportunity. Flowing Wells students Mimosa Van (Cross Country/Track) and Sammy Padilla (Soccer/Baseball) were recognized at halftime along with Amphitheater student athletes Kenya Beckwith (Spirit) and Nathaniel Carissimi (Football). In addition, former Flowing Wells championship runner and current Cross Country and Track coach Ellen Mork-Villalobos was recognized by the Caballeros and former University of Arizona softball All-American Laura Espinoza-Watson was recognized by the Panthers.

Watson’s nephew, Jacob Espinoza, is freshman standout for Amphitheater and he finished with 56 yards rushing including a 16-yard dash on a 3rd and 15 play to put the game away in the final seconds. The ensuing Panther celebration was in direct contrast to how the game started.

The Panthers took the opening drive backwards on a huge penalty followed by a fumble at their own 18 to set the Caballeros up but a fumble on the next play at the 13 ended that threat. That lost opportunity was forgiven after Carlos Quintero picked off an Amphitheater pass on the following drive and he went 76 yards to put Flowing Wells up 6-0 with 6:18 left in the quarter.

Disaster hit the Panthers again on bad snap on a punt and Alex Madrid hit Jonathan Odell two plays later from seven yards out to make it 12-0. The lost opportunities on the extra points would also come back to haunt the Caballeros.

Trejo scored the first of his three touchdowns on the next drive and his 43-yard run cut the lead down to 12-7 seconds into the second quarter. A fake punt by the Caballeros gave the Panthers great field position but Angel Perez came up with the second interception of the night for Flowing Wells only to have the Caballeros punt again a few plays later.

Trejo scored from four yards out later in the quarter to make it 13-12 Amphitheater at the half. The Caballeros missed a field goal attempt to open the third quarter and Trejo ran the next play 80 yards to give Amphitheater a 20-12 lead.

Flowing Wells responded with a scoring drive to cut things close again with Madrid reaching over the goal with 4:32 left in the third. Another missed opportunity on the extra point made it 20-18 Amphitheater.

Trejo scored again from three yards out to give the Panthers a 27-18 lead with 7:24 left in the game and Chris Martinez hit Quintero on a 36-yard play to set up short scoring throw to Odell to cut the Amphitheater lead down to 27-24 with 3:28 left but the Panthers were able to run the clock out the rest of the way.

Flowing Wells visits Surprise to play Willow Canyon next week and Amphitheater will host Sahuarita (0-1). There will be no automatic playoff berths this year in the 4A to 6A ranks so teams have to win and collect power points to stay alive. The Panthers have a very favorable schedule the rest of the way and could, conceivably, run the table if the team takes one game at a time with Flowing Wells out of the way but the Caballeros have to find a way to cash in on the opportunities that eluded them at Amphitheater. 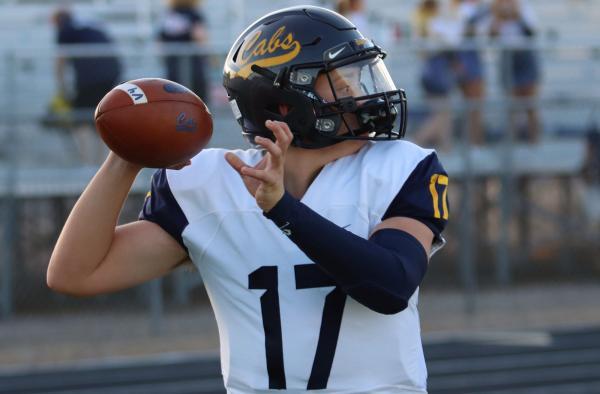