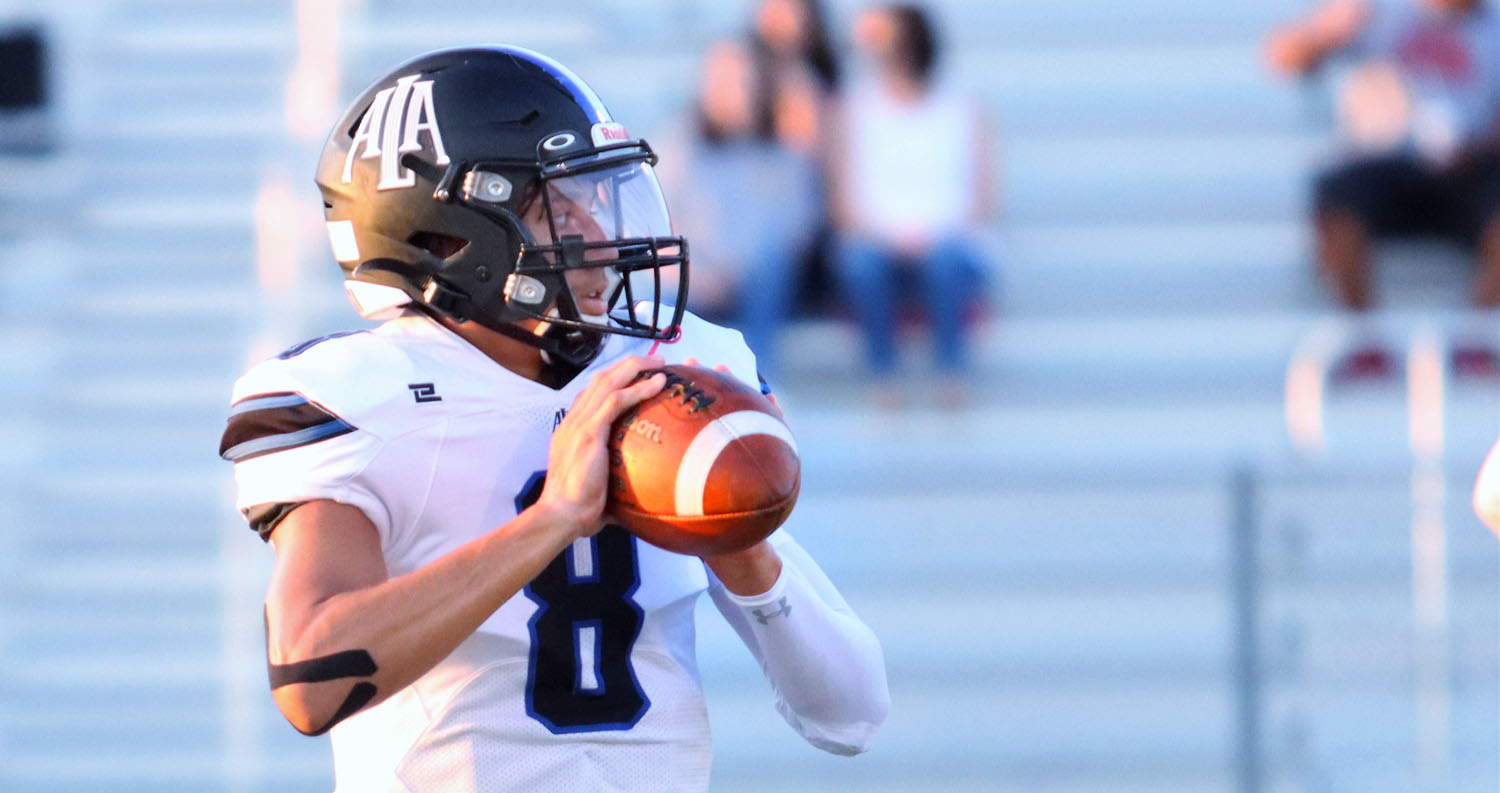 American Leadership Academy – Gilbert North took chances and made big plays to get past a very tough Sabino squad 33-21 Friday night in the northeast foothills of Tucson. In all, the Eagles converted on four fourth-down situations and extended time-consuming drives by getting past several difficult third-and-long obstacles that the team saw as opportunities.

“I’m not putting any of this on my guys,” Sabino head coach Ryan McBrayer explained. “That’s a very good team and they’ve been scoring 60 points a game and our defense held them.”

ALA-Gilbert North improved to 3-0 on the year with two previous wins by scores of 69-0 and 60-0 so the Sabercats effectively cut that video-game scoring average in half Friday night and the Sabino offense was the first to put up points against the Eagles defense. The Eagles fumbled ball away after only two carries and Sabino cashed in on the turnover with Andres Baca ripping off a 25-yard scoring run three plays later.

The 7-0 deficit was obviously the first time the Eagles had to play from behind this year and the team responded by going 80 yards on 14 plays including a fourth-and-six situation at their own 24-yard line. Had the Eagles failed to convert that play, there’s a good chance the Sabercats go up 14-0 and the game changes completely.

“We are going to go for it on fourth down this year,” junior quarterback Adam Damante said. “I trust my teammates to get it done and I think we are going to win it all this year so we have to play like we are ready.”

Bric Jobe finished the drive off with 2-yard run to tie the game up 7-7 with 5:41 left in the first quarter and then Sabino fumbled the ball away on the next drive at the tail end of a 24-yard reception that put the ball into Eagle territory. That turnover proved to be one of the defining moments of the game because it stopped momentum but the Sabercat defense forced a punt to put Sabino back in the driver’s seat – temporarily.

The Eagles got the ball right back on an interception in Sabino territory and it was a crushing play coupled with another fourth down conversion for the Eagles to help set up a 35-yard field goal from Luc Asay. Asay is a workhorse for the Eagles and he finished with two field goals and 55 yards receiving, including a 13-yard scoring catch later in the game.

Asay’s first kick put ALA-Gilbert North up 10-7 and the teams traded punts until the Eagles capitalized on a short field with Damante hitting Johnny Bellino from 16 yards out to make it 17-7 with 5:21 left in the half.

Damante finished with 152 yards passing on 16 of 37 completions including two TD passes but he also rushed for another score in the second half. For Damante, it was either big gains or incompletions the rest of the way and the Eagle’s next drive stalled on a miss but Asay made his second field goal to put the Eagles up 20-7 at the half.

Aidan Rhode quietly rushed for 102 yards on 21 carries for ALA-Gilbert North but the Sabercats also came in with offensive punch with sophomore QB Cameron Hackworth going 18-22 for 189 yards in the air and 138 yards rushing on 14 carries and it was a 17-yard pass to fellow sophomore Savaughn Berryhill that cut the game down to 20-14 with 7:45 left in the third.

The Eagles responded with another massive scoring drive that covered 92 yards in almost six minutes. This drive was aided by a big dead-ball penalty that advanced the ball to the Sabercat 35 and then ALA-Gilbert North converted on a 4-7 at the 32 and fourth-and-goal at the 2 to put the Eagles up 26-14 with Damante doing the honors with his feet this time. The Sabercats were unable to respond and the Eagles went 66 yards with Damante hitting Asay from 13 yards out to make it 33-14 with 7:45 left in the game.

“We kept fighting and never gave up. We just keep coming,” Hackworth said. “I think we are just starting.”

True to his word Hackworth did not back down and he engineered a long scoring drive of his own down the stretch and he found Kenneth Blackman in the endzone for the 33-21 final.

Sabino showed the ability to score against one of the best defenses in the state and the Sabercats were also able to hold ALA-Gilbert North to half their average. The team dropped to 2-1 on the year but region play starts next week for the Sabercats with a visit to Thatcher (3-0). The Eagles will also have their talons full with an undefeated Yuma Catholic (3-0) team visiting next Friday.