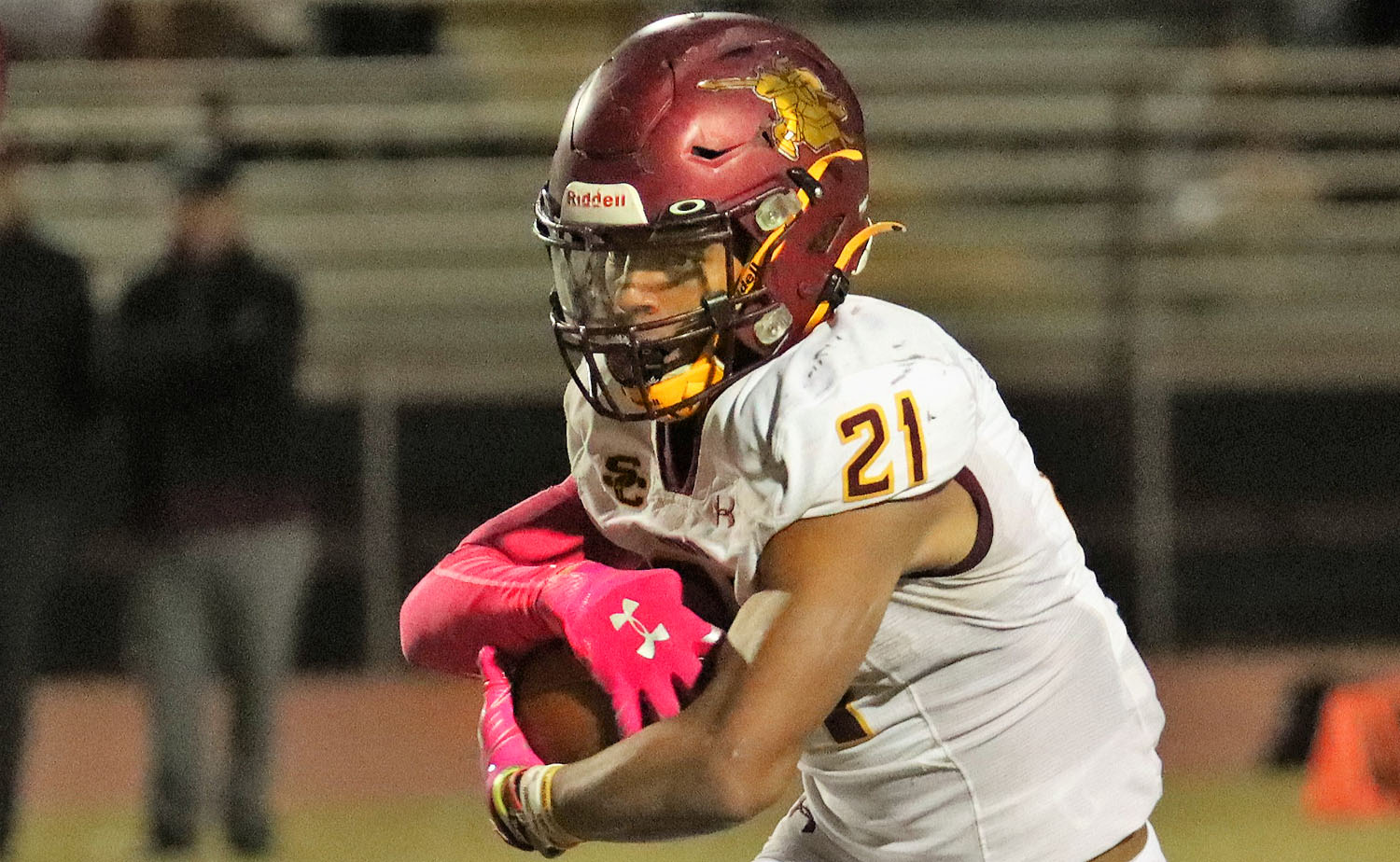 It was arguably one of the biggest games in Desert View history but it was also a situation the Lancers have seen many times over the years and that helps to explain what happened Friday night when the Lancers beat Desert View 48-0. As mentioned, Salpointe (4-2) has competed in many big games, especially in the last five or six years, so going up against the top-ranked team in the 5A Conference was basically business as usual but being on top and being the hunted was uncharted territory for Desert View (5-1).

“We came into the game and it was kind of personal but we play hard games and teams every week and Salpointe has always been considered a better team and more disciplined at football for a long time,” Salpointe standout Elijah Rushing said. “We came into the game, they were ranked higher than us but we just executed and grinded with not a lot of mistakes today.”

By contrast, the Jaguars played like they didn’t know what to expect.

“I told them they acted like it was going to be handed to them,” Desert View head coach Robert Bonillas explained. “I told them I'm going to take the blame for not getting them ready for this game mentally.”

Antonio Martinez spoils another scoring try with the INT @SCLancerNation ball up 20-0 7:38 in half #azpreps365 https://t.co/hK9gNL98bm pic.twitter.com/MJYYaGxH9Y

In all, the Jaguars were penalized a dozen times with offsides calls extending Salpointe drives and illegal motions and personal fouls putting a damper on their own drives at a time when the Lancer defense wasn’t giving up much real estate to begin with.

Some thought the quarterback play would decide this game, especially if it got close, but Salpointe RB Anthony Wilhite scored four touchdowns in the span of about 15 minutes to put the game away early. He punched the ball in with about 6 minutes left in the first quarter to put the Lancers up 6-0, with a blocked extra point, and he scored three minutes later on a 38-yard dash for a 13-0 lead heading to the second quarter. He added another scoring run less than a minute into the second quarter and he scored again with 2:16 left in the half.

Wilhite finished the night with 154 yards on 24 carries with the four TDs and he came a few inches short of scoring again in the third quarter but he was ruled down and QB Treyson Bourguet stepped into the end zone on the next play to make it 34-0 with 3:16 left in the third.

“This was the outcome we expected. Every game for us is the new game of the week so this wasn't anything new for us,” Wilhite explained. “We knew the pressure wasn't on us, it was all on them and we just came out here to play the next game like the way we know.”

Salpointe took care of Canyon del Oro to start the season but then the Lancer offense struggled in the second half of the 30-22 win at Cienega and it struggled again in the first half of a huge 34-9 win at Ironwood Ridge and then the team lost to Scottsdale Saguaro and Pinnacle with a nearly nonexistent offensive showing in the loss in Scottsdale, except for 125 yards rushing from Wilhite. Bourguet was limited to 154 yards through the air on 19 of 30 attempts at Desert View and the throwing game has only produced two TD grabs since Sept. 16.

One would thing the Lancers will need to have a more balanced attack as the playoffs draw near.

“We just need to keep playing with our plan, execute, do our job, and just play together, Rushing added. “I know I need to work on my technique a little more and we will be ready the rest of the year.”

With Wilhite resting on the sidelines, Elias Roberts took over and he scored with 2:35 left in the third and again with 8:47 remaining in the game for the 48-0 final margin.

The Jaguars will likely drop out of the Open Division when the new power rankings are released on Tuesday but the program is in a safe position for the 5A playoffs and the Lancers improved their seed in the conference. Had Salpointe lost this game, making the playoffs would have been difficult with the remaining teams on the schedule all ranked between No. 25 and No. 40, but the team has to take care of business the rest of the way and not worry too mcuh about that.

Desert View will travel to Mountain View Marana (1-4) next week and we will know come Tuesday afternoon what the Jaguars need to do to retain a higher seed for the playoffs. This will be the fifth time the team has qualified for the playoffs since the program started in 1985 but the program has only made it past the first round once and that was in 1987. A high seed is imperative.