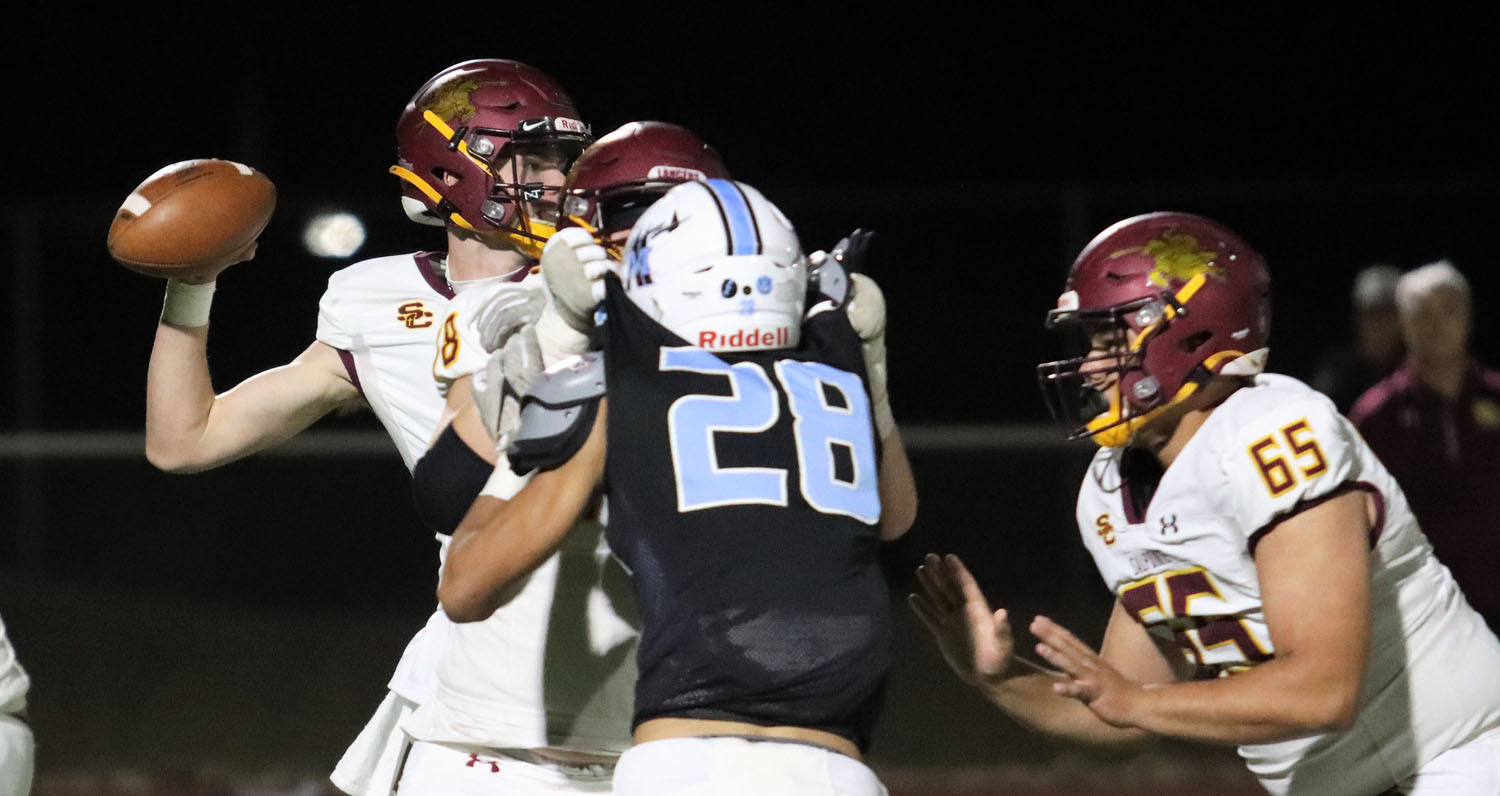 No. 5 Salpointe improved to 5-2 on the year with a 56-5 victory at Mica Mountain Thursday night. Built last year, Mica Mountain (2-2) is the third high school in the Vail School District to offer football, with Cienega and Empire being the two established programs, but the Thunderbolts appear to be the program of the future with lots of questions raised in this, its inaugural varsity season.

Placed in the 4A Conference, Mica Mountain is classified as an unranked independent program without an affiliation with either the Gila Region or the Kino Region in Southern Arizona and the program started the year out with only four games scheduled, which meant no possibility of making the playoffs under the playoff qualifying rule of six completed games minimum. The staff at Mica Mountain turned to some creative scheduling to reach that magic number and the addition of Salpointe and Bradshaw Mountain (3-3) made a playoff berth a possibility.

The Lancers are currently ranked high enough to be a safe bet for the 5A playoffs but it’s unknown what kind of power points will be awarded from the victory at an unranked team like Mica Mountain. Plus, the rest of Salpointe’s schedule is comprised of No. 30 Buena (1-4), No. 26 Mountain View (2-4) and No. 28 Flowing Wells (3-4). There is a possibility the Lancers could fall out of the top 8 and lose the ability to host a first round game but the Open Division could be the difference.

No. 1 Horizon (6-0) is currently in the Open Division and the Huskies are playing at No. 2 Saguaro (5-1) Friday night. The rest of the 5A programs are hoping both of those power programs qualify for the Open Division which would open up two more spots and bump everyone else up. For instance, if Salpointe finishes the year ranked No. 10 but Horizon and Saguaro make the Open Division then the Lancers will be bumped up to No. 8 as a playoff seed. That scenario would also help bubble teams like No. 17 Cienega (3-3) for the same reason.

The question of power points for the Lancers might be answered on Tuesday when the new set of rankings are released but the Mica Mountain faithful would have to wait until the brackets are released in mid-November to see if they made the 4A playoffs due to the timing of the sixth game at Bradshaw Mountain. A victory over No. 17 Amphitheater (4-1) on Nov. 5 might be enough due to the difficult schedule the Thunderbolts put together.

6A power Mesa Mountain View beat Mica Mountain 37-7 last week and that was followed up by the loss to Salpointe. At some point, the Bolts will need to beat a strong opponent and the team might have to wait until next year to get that accomplished because teams like Salpointe will offer an underdog a small window of opportunity, but it will close quickly. 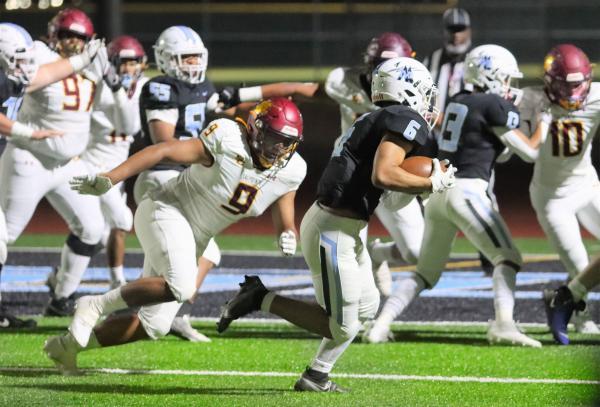 Salpointe RB Anthony Wilhite finished with 70 yards on 10 carries and his 28-yard dash put the Lancers up 7-0 only one minute into the game but then that window of opportunity was left open but the Thunderbolts were unable to take advantage of it. Jr. QB Joshua Beans hit Jonah Garcia on a pump fake and the sophomore raced 81 yards only to be caught just short of the goal line. The Lancer defense gave up a huge play but the Bolts were unable to move the ball from there and the team settled for a 20-yard field goal from Ethan Black to make it 7-3. The window was slammed shut and then everything broke loose.

Treyson Bourguet hit Cody Raetzman from 20 yards out to make it 14-3 and then Bourguet connected with Gage Felix from 5 yards out to increase the lead to 21-3 heading into the second quarter.

Bourguet went 6-8 for 88 yards and his third TD pass went to Michael Aguirre to make it 28-3 with 10:07 left in the half. Mica Mountain followed that up with a sustained drive that had the makings of a score to draw closer but a fumble was snatched up by Jaxson Greene and the junior flew down the field some 68 yards to make it 35-3. That lost opportunity by Mica Mountain was magnified on the next drive when Greene returned an interception 50 yards to make the score 42-3. A safety on a botched punt by Salpointe later in the half cut the lead down to 42-5 at the half.

The Bolts controlled the third quarter and held possession for over 10 minutes but an interception at the goal line put the Lancers back in business and backup QB Dylan Dreis hit Raetzman from 31 yards out to make it 49-5 and then Dailan Goodman converted on a 10-yard run after another turnover by Mica Mountain for the 56-5 final.

Raetzman finished with 51 yards receiving with both catches going the distance.

“We had a lot of guys in by the end of the game and I had two great QBs throw to me,” Raetzman said. “They just led me open on those two posts and I got my first TDs.”

Typically a safety, Raetzman has been getting some snaps on offense due to his speed and ability to track and catch a ball.

“As a team, we just need to work on third down conversions and just keep rolling up teams and come together,” Raetzman added when asked about where his team goes from here.

There might be more opportunities for head coach Eric Rogers to get more subs in and experiment over the last three games and that should make the team stronger come playoff time. The Lancers have two straight Open Division semifinal finishes that followed two straight championship game appearances. In fact, the Lancers have made the semifinal round five years in a row and it looks like another one, or better, is possible this fall. 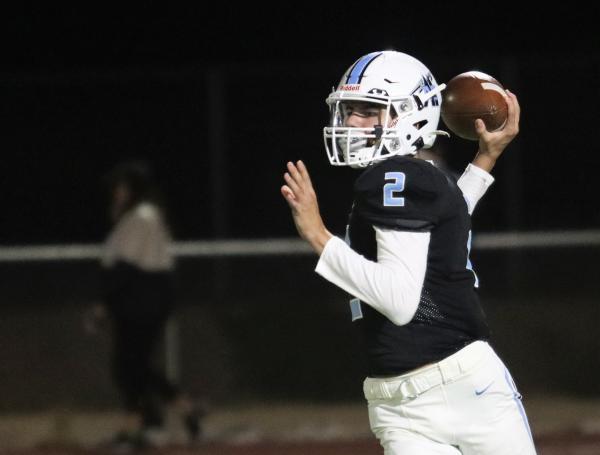