Reagan Hope goes up for a block on Andrea Owens. (Andy Morales/AZPreps365)

As far as power teams go, it was a battle one would expect to be played out on the indoor volleyball courts, but Northwest Christian and Salpointe Catholic met Thursday evening on a beach located at the foothills of San Tan Mountain to decide the top Division II Pairs in the state and it didn’t disappoint.

McKenzie Wise and Reagan Hope came away with a 2-0 victory over Brandy Kishbaugh and Andrea Owens to give the Crusaders their first taste of victory in the relatively new high school sport of Beach Volleyball but Northwest Christian has had plenty of success indoors with 14 state championships, including the last three 3A titles under head coach Jenna Hope.

As one would guess, Reagan is the daughter of her head coach and the 6-foot-2 standout committed to play for Oregon as a freshman and Wise is headed to Grand Canyon as an outside hitter. Wise has more experience on the beach but the newly-minted state champions have played together since they were 12.

Likewise, Owens and Kishbaugh have known each other for a few years but various injuries this spring prevented the pair from fully developing as a force and that’s scary in itself considering the top-ranked pair at the D-II level helped lead the Lancers to their first team championship in beach play one week ago and then took No. 3 Wise and Hope to the limit at Casteel High School on Thursday. 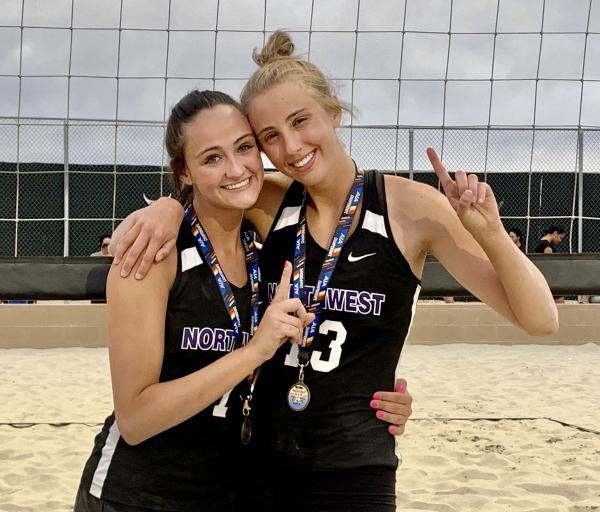 The Lancers have three indoor titles, including a 4A championship this year, and success on the beach came right away under head coach Heather Moore-Martin with a runner-up finish in 2016 in team competition (the first year the program was eligible) to go along with a pairs runner-up finish in 2018 (the first year AIA offered the championship) and a pairs championship in 2019 with current University of Arizona beach standouts Alex Parkhurst and Abby Russell earning the medals. Simply, these are two power-programs guided by legendary coaches.

The best of the best made it to state but, when that happens, seedings have a way of faltering when toes actually touch the sand. Unseeded Valley Christian sophomores Korah Nordin and Kate Phillips took out No. 2 Elli Wolthus and Ashley Salaza of Gilbert Christian (21-16, 21-19) in the quarterfinal round on Tuesday before falling to Wise and Hope (21-17, 21-18) in the semifinal round on Thursday held right before the state final.

On the other side, the unseeded Canyon del Oro pair of senior Katie Call and junior Morgan Hains took out No. 4 Brooke Parker and RiKenna Curtis of Coconino (14-21, 21-18, 15-8) in the quarterfinals before losing to Kishbaugh and Owens (21-11, 21-9) in the semifinals. Two have two unseeded pairs make it to the final night is a sign of success for both programs.

The final was ready to go and Kishbaugh and Owens led 16-12 in the first set but Wise and Hope slowly pulled ahead for the 22-20 win and then the Northwest Christian seniors pulled out the second set 21-17.

Kishbaugh is still working her way through a recruitment process hampered by the pandemic but Owens is headed to North Texas for indoor volleyball with plans to take the fifth year allotted for beach at a program that offers the sport. Playing a fifth year on the beach is a vey common practice for indoor athletes and it helps fulfill the investment districts have put into the costs of building sand courts, like the complex on the campus of Casteel High School.